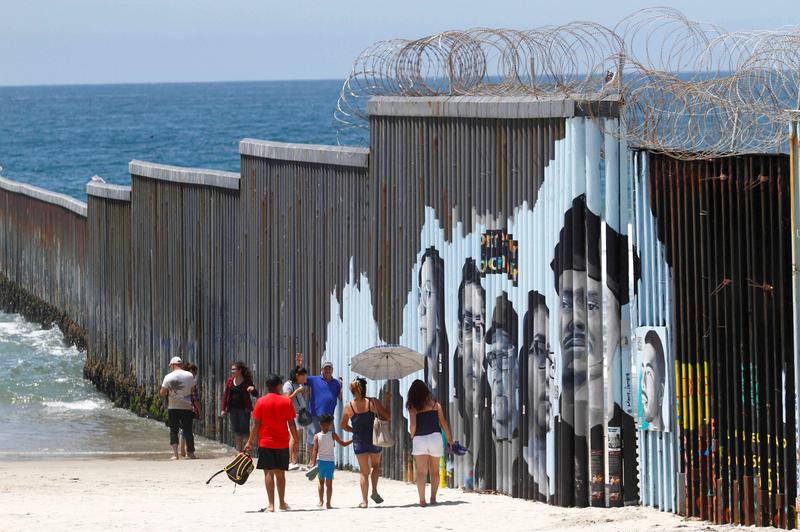 (Reuters) – U.S. President Donald Trump’s administration unveiled a new rule on Monday that could deny visas and permanent residency to hundreds of thousands of people for being too poor.

People are seen in front of a graffiti next to a section of the wall separating Mexico and the United States, in Tijuana, Mexico August 10, 2019. REUTERS/Jorge Duenes

The long-anticipated rule, pushed by Trump’s leading aide on immigration, Stephen Miller, takes effect Oct. 15 and would reject applicants for temporary or permanent visas for failing to meet income standards or for receiving public assistance such as welfare, food stamps, public housing or Medicaid.

Such a change would ensure that immigrants “are self-sufficient,” in that they “do not depend on public resources to meet their needs, but rather rely on their own capabilities, as well as the resources of family members, sponsors, and private organizations,” a notice published in the Federal Register said.

“The principle driving it is an old American value and that’s self-sufficiency,” Ken Cuccinelli, the acting director of U.S. Citizenship and Immigration Services, said in a Fox News interview published on Monday.

“It will also have the long-term benefit of protecting taxpayers by ensuring people who are immigrating to this country don’t become public burdens, that they can stand on their own two feet, as immigrants in years past have done,” he said.

The overhaul is part of President Donald Trump’s efforts to curb both legal and illegal immigration, an issue he has made a cornerstone of his presidency.

He has pledged to build a wall along the U.S. southern border with Mexico – initially saying Mexico would pay for it – and has pressed for changes to immigration laws. Both efforts have made little progress with lawmakers.

This rule change on benefits could be the most drastic of all the Trump administration’s immigration policies, experts have said. Advocates for immigrants have criticized the plan as an effort to cut legal immigration without going through Congress to change U.S. law.

Under the new rules, more than half of all family-based green card applicants would be denied, according to the Migration Policy Institute, a research organization. Some 800,000 green cards were granted in 2016.

Most immigrants are ineligible for the major aid programs until they get green cards but the new rule published by the Department of Homeland Security expands the definition of a public charge that stands to disqualify more people.

Applicants will now need to show higher levels of income to get a visa and the rule greatly expands the list of government benefits that would disqualify them from obtaining U.S. residency.

Immigrant advocates have expressed concern the rule could negatively affect public health by dissuading immigrants from using health or food aid to which they or their children are entitled.

Other parts of the Trump administration have taken or are contemplating similar approaches to penalize immigrants’ use of public assistance.

The State Department changed its foreign affairs manual in January 2018 to give diplomats wider discretion in deciding visa denials on public-charge grounds. In the 2018 fiscal year, which ended last September, the number of visas denied on those grounds quadrupled compared to the previous year.

The Justice Department also is considering a regulation that would dramatically expand the category of people who could be subject to deportation on the grounds that they use public benefits.