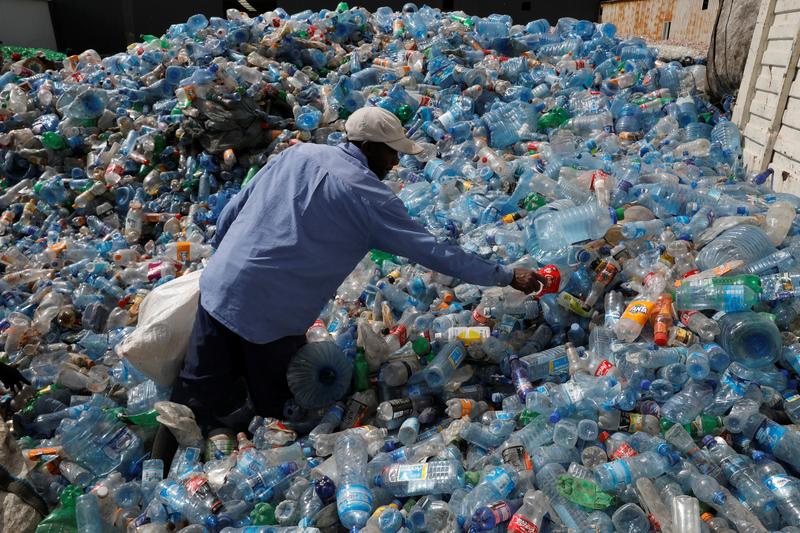 NAIROBI (Reuters) – A sea of crumpled bottles spills across the courtyard of Lucy Luo Minghui’s new $44 million plastic recycling factory in Nairobi, where plastic waste litters roadsides and clogs rivers. Yet, she can’t get enough to sustain her business.

Her Weeco facility, which opened in April, is one of a slew of regional initiatives to tackle the world’s spiraling plastic waste crisis. Almost all are caught up in a standoff between consumer companies and governments over how to collect it.

Minghui hoped to use the global glut in plastic waste to create low cost textile fibers from plastic bottles. Prices for used bottles nosedived after China barred the import of low-grade plastic waste in 2017.

But she cannot get anything close to the 2,000 tonnes of plastic she wants to recycle each month. “In a month we’ve collected just 650 tonnes,” Minghui told Reuters.

“If we don’t have enough material, our business is at a loss because we must pay for workers, electricians and water.”

Like many developing nations, Kenya has no recycling infrastructure; private companies collect unsorted household rubbish and truck it to enormous dumps. Waste pickers scavenge through trash bags outside homes and stinking mounds of refuse at dumps to recover the plastic that Minghui needs.

Multinationals like Coca-Cola (KO.N) and Unilever (ULVR.L) subsidize the collection of polyethylene terephthalate (PET), the plastic commonly used in their bottles, because the margins are too low in Kenya.

The non-for-profit body called PETCO Kenya which they belong to pays 5 shillings (US cents) on top of the 19 shillings per kilo Minghui pays the companies who deliver the PET bottles, which arrive uncompressed and have to be sorted by hand.

But the volume taken up by uncompressed bottles makes them uneconomic to transport, particularly over large distances.

“Margins are not making sense (for the truckers),” said Joyce Gachugi, manager for PETCO Kenya, adding that the state should waive fees on moving rubbish across county boundaries.

The subsidy is working, she said, adding that recyclers had been able to dramatically increase their volumes. Minghui said it had helped her bring volumes up from 200 tonnes.

PETCO, which says its members account for 60 percent of the PET market, wants the government to compel the rest to join recycling schemes. A law on the latter is now in parliament and the government, which threatened to ban plastic bottles last year, says it is waiting to see if that will work.

PETCO Kenya said in August it has recycled 2,400 tonnes of plastic waste so far this year against its 2019 target of 6,000 tonnes, a target it plans to increase in coming years. About 20,000 tons of PET plastic waste is created in the country each year, said the Kenya Association of Manufacturers.

Discarded plastic bottles litter Kenya’s beaches and make their way down rivers to the sea. Unless dumping stops, the United Nations says by 2050 there will be more plastic in the ocean than fish.

Consumer brands Coca-Cola, Unilever and Nestle (NESN.S) are among the world’s biggest producers of plastic trash, according to an October 2018 Greenpeace report.

The companies say they have set ambitious environmental targets and are investing in sustainable solutions such as recycling plastic bottles back into bottles, but that the situation is complex.

An employee sorts plastic bottles at the Weeco plastic recycling factory at the Athi River industrial zone near Nairobi, Kenya, May 15, 2019. Picture taken May 15, 2019. REUTERS/Baz Ratner

“The challenge is huge with different problems to solve in each country, in the cities and in rural areas,” Nestle said. “There are so many elements to get right.”

Coca-Cola, Nestle, Unilever and Diageo (DGE.L) formed an African plastic recycling alliance in March, to build on national recycling initiatives, which member companies already collaborate with, such as in Ghana, Nigeria and South Africa.

“As we learn the lessons from these initiatives we will look at how to scale up or replicate in other parts of the continent,” Shilla Christianto, corporate spokesperson for Nestle, one of the contacts for the Alliance, said.

South Africa, which recycled nearly two-thirds of its plastic waste in 2018, is the only African nation with a successful recycling model.

South Africa’s PETCO is the model for Kenya’s. Casper Durandt, a Coca Cola employee who founded South Africa’s program 18 years ago, said PETCO pilots are being rolled out in Ethiopia, Tanzania, Thailand, Vietnam, Philippines and Malaysia.

He said PETCO was a voluntary scheme but companies needed a nudge. “Government needs to threaten the obliged industries and say ‘listen, if you guys don’t clean up your act, I will impose a tax’,” said Durandt, Franchise Technical Director Coca-Cola Southern Africa and chairman of PETCO South Africa.

Many nations struggle to recycle.

In Nigeria, a consortium of beverage companies led by Coca-Cola struck a deal in September 2018 with cement maker Lafarge (LHN.S) to burn plastic bottles as fuel in kilns.

Daniel Adedokun, head of recycling at Lafarge Nigeria, said the consortium was currently collecting 150 tons per month. “When I commission my new facility (in October) I will request an increase to 1000 tons,” he said by telephone.

In Ghana, eight beverage companies started the GRIPE recycling alliance and are courting a Canadian company, which they declined to name, to set up a factory producing textile fibers.

The factory needs 4,000 tons of plastic waste annually but right now the 18-month-old alliance only collects 1,200 tons a year. They declined to say how much scaling up would cost, saying it was a sensitive negotiation between the eight members.

“If we can’t collect enough, they can’t set up,” said Gabriel Opoku, head of social engagement for Diageo Africa, one of the GRIPE members. Few communities in Africa separate plastics from other waste, he said. “That is where the big challenge is.”

African countries such as Kenya and Rwanda have already banned plastic bags tmsnrt.rs/2VDAfa7. Now lawmakers are looking at other plastic pollution. Environmentalists want companies to be legally responsible for collecting their waste, and single use plastic to be phased out.

A study of such schemes in the European Union showed that a 10-shilling (10 cent) deposit means 90% of bottles would be returned, said Usman Valiante, an analyst on plastic policy advising U.N. Environment.

But companies will not risk hurting their bottom line unless governments force them, he said.

“There will not be any incentive for Nestle, Coca-Cola or Unilever to set up such systems without a regulatory requirement.”

When bottles are recycled into textiles, plastic still leaches out into the environment as microfibres, which penetrate the food chain.

“Recycling is not working.”