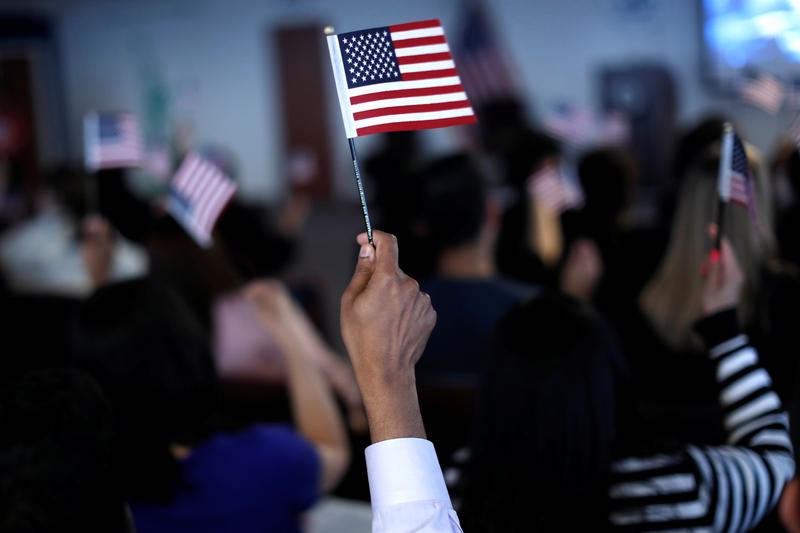 (Reuters) – U.S. President Donald Trump’s administration unveiled a sweeping rule on Monday that some experts say could cut legal immigration in half by denying visas and permanent residency to hundreds of thousands of people for being too poor.

The long-anticipated rule, pushed by Trump’s leading aide on immigration, Stephen Miller, takes effect Oct. 15. It would reject applicants for temporary or permanent visas if they fail to meet high enough income standards or if they receive public assistance such as welfare, food stamps, public housing or Medicaid.

“The Trump administration is trying to bypass Congress and implement its own merit based-immigration system. It’s really a backdoor way of prohibiting low-income people from immigrating,” said Charles Wheeler of the Catholic Legal Immigration Network Inc.

The rule is part of Republican Trump’s efforts to curb both legal and illegal immigration, an issue he has made a cornerstone of his presidency.

After the rule was announced, the National Immigration Law Center (NILC) said it would file a lawsuit to stop it from taking effect. The group’s executive director said the rule was racially motivated. The state attorneys general of California and New York threatened to sue.

The 837-page rule, seeking to target those who could become “public charges” in the United States, could be the most drastic of all the Trump administration’s policies targeting the legal immigration system, experts have said. It could deny visas to people for not making enough money or who are drawing public benefits.

The government estimates the status of 382,000 immigrants could immediately be reviewed on those grounds. Immigrant advocates fear the real number could be much higher, especially if the rule is extended to the millions of people who apply for U.S. visas at American consulates around the world.

The State Department already changed its foreign affairs manual in January 2018 to give diplomats wider discretion in deciding visa denials on public charge grounds. In the fiscal year that ended last September, the number of visas denied on those grounds quadrupled compared to the previous year.

“This is an end run around Congress to achieve through executive fiat what the administration cannot get through Congress,” said Doug Rand, co-founder of Boundless, a pro-migrant group that helps families navigate the U.S. immigration system.

The rule is intended to scare immigrants away from using public benefits to which they are legally entitled, Rand said, adding that a study by Boundless found it could eliminate more than half of visa applicants.

A 2018 study by the Migration Policy Institute found 69 percent of already established immigrants had at least one negative factor against them under the administration’s wealth test, while just 39 percent had one of the heavily weighed positive factors.

Other immigrant advocates have expressed concern the rule could negatively affect public health by dissuading immigrants from using health or food aid. The Trump administration estimates its rule will save $2.47 billion annually in spending on public benefits.

The rule is derived from the Immigration Act of 1882, which allows the U.S. government to deny a visa to anyone likely to become a “public charge.”

Ken Cuccinelli, the acting director of U.S. Citizenship and Immigration Services (USCIS), said at a White House media briefing that the law has always required foreign nationals to rely on their own resources, with help from relatives and sponsors, but the term “public charge” was never clearly defined.

“That is what changes today with this rule,” Cuccinelli said.

The new rule defines public charge as an immigrant who receives one or more designated public benefits for more than 12 months within any 36-month period.

The definition of public benefits is cash aid including Supplemental Security Income, Temporary Assistance for Needy Families, the Supplemental Nutrition Assistance Program (SNAP), most forms of Medicaid, and a variety of public housing programs, officials said.

“The principle driving it is an old American value and that’s self-sufficiency,” Cuccinelli said in a Fox News interview.

Whether someone is public charge will be determined on a variety of positive and negative factors. A positive factor would be earning 125 percent of the poverty line, which is $12,490 for an individual and $25,750 for a family of four, while earning less would be a negative factory.

Critics have decried the effort to limit legal immigration for lower-income people affront to the ideals of the United States highlighted by the inscription on the Statue of Liberty that reads “Give me your tired, your poor, your huddled masses yearning to breathe free.”

Trump aide Miller, asked in 2017 about whether the administration’s policies countered that inscription, said the words were not original to the monument.

Cuccinelli was also asked about the inscription at the White House on Monday and said: “I do not think, by any means, we are ready to take anything off the Statue of Liberty.”

In early 2018, Trump rejected a bipartisan effort in Congress to reform the immigration system. The effort became embroiled in controversy over accusations by a Democratic senator that the Republican president disparaged African and Caribbean nations with a vulgarity in regard to their immigrants. Trump was reported to have asked why the United States could not get more immigrants form northern Europe.

Trump has denied using that language and said he wanted immigrants to come the United States from all nations.

Reporting by Daniel Trotta in New York; Additional reporting by Mica Rosenberg in New York and Susan Heavey and Makini Brice in Washington; Editing by Bill Trott and Grant McCool