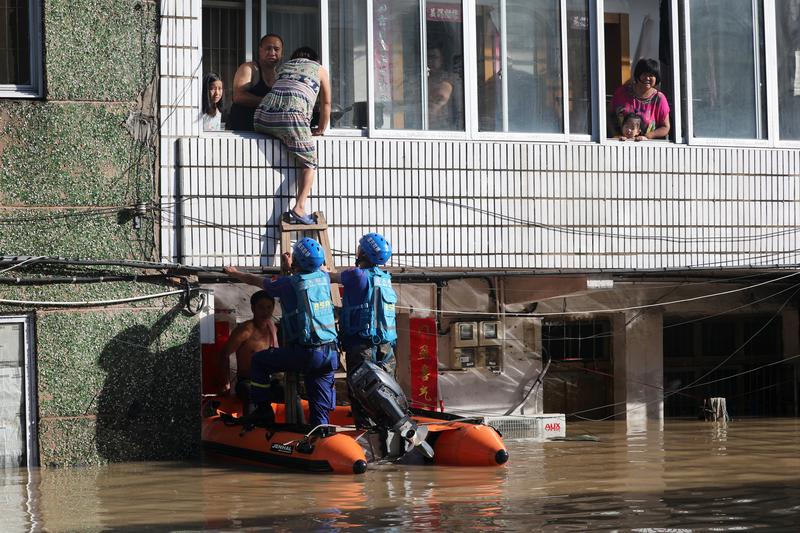 BEIJING (Reuters) – The death toll from typhoon Lekima in eastern China rose to 44 people on Monday morning, according to official data, as the storm continued up the coast, racking up billions of dollars in economic losses and widely disrupting travel.

An additional 12 people were recorded dead from the storm, including seven from Zhejiang province and five from Shandong, with 16 people missing, according to data from provincial emergency bureaus and state media.

State broadcaster CCTV had put the death toll at 32 on Sunday.

Typhoon Lekima made landfall early on Saturday in China’s Zhejiang province, with winds gusting up to 187 kmh (116 mph). The center of the storm has since traveled north through Shandong and off the coast.

Many of the earlier deaths occurred when a natural dam collapsed in Zhejiang after a deluge of 160 mm (6.2 inches) of rain within three hours.

The Shandong Emergency Management Bureau said more than 180,000 people were evacuated in the province, adding to an earlier evacuation of roughly 1 million people in Zhejiang and Jiangsu provinces as well as the financial hub of Shanghai.

The latest update from Shandong brings the total estimated economic toll of the storm to 18 billion yuan ($2.55 billion) in China, including damage to 364,000 hectares of crops and more than 36,000 homes. Shandong alone estimated the total economic impact on agriculture was 939 million yuan.

Qingdao, a popular tourist hub in eastern Shandong, issued a red alert on Sunday, closing all its tourists sites and suspending 127 trains and all long-distance bus services, according to official media.

Lekima is China’s ninth typhoon this year. China’s state broadcaster said on Sunday more than 3,200 flights had been canceled but that some suspensions on high-speed railway lines had been lifted.

The typhoon was expected to weaken as it heads northwest off the coast of Shandong into the ocean east of China’s capital, Beijing.