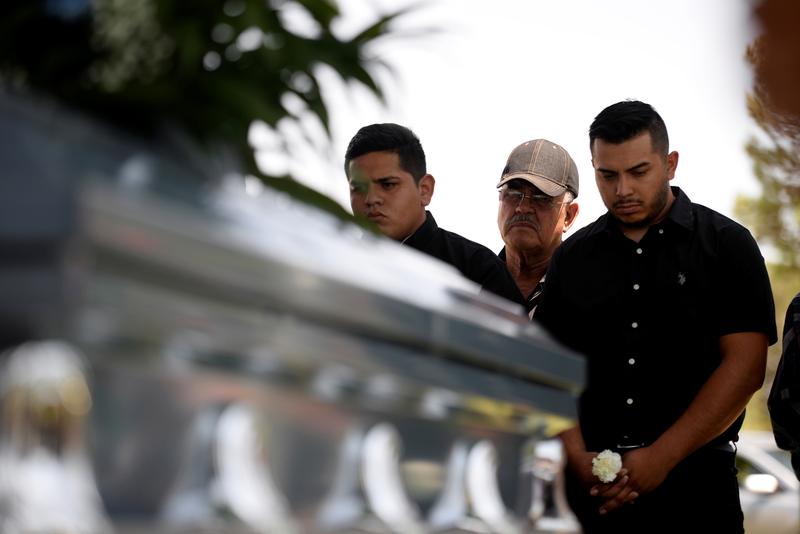 EL PASO, Texas (Reuters) – A week after a gunman killed 22 people in El Paso, activists on Saturday will lead a march in the West Texas city that they say will draw hundreds of people standing up against hatred.

Friends and family gather for the burial of Juan Velazquez, six days after a mass shooting at a Walmart store in El Paso, Texas, U.S. August 9, 2019. REUTERS/Callaghan O’Hare

The gunman killed mostly Hispanic people in a Walmart store last Saturday, and law enforcement agencies have said he was driven by animosity for Hispanics, citing a manifesto he posted online that was rife with anti-immigrant hatred.

Hours after that mass shooting, a gunman slayed nine people on a street in downtown Dayton, Ohio, before police shot and killed him. The back-to-back shootings have reignited the gun control debate in the United States.

Following the El Paso massacre, which also left at least two dozen people injured, some Democratic presidential candidates accused President Donald Trump of stoking racial divisions and said he was indirectly to blame for the mass shooting by a gunman with anti-immigrant views.

Beto O’Rourke, a former congressman from El Paso who is among the Democrats running for president, called Trump a “racist” and “xenophobe.”

The Republican president on Wednesday said on Twitter, “The Dems new weapon is actually their old weapon, one which they never cease to use when they are down, or run out of facts, RACISM!”

O’Rourke will speak on Saturday at the march and rally, which is called “March for a United America,” organizers said.

“There will be a call for forgiveness, a call to tone down the rhetoric,” Randy Parraz, national organizing director for LULAC, said in a phone interview.

The event will feature a call to end scapegoating of Hispanic people and immigrants, and some speakers may advocate for universal background checks for firearm purchases.

Among the other speakers will be U.S. Representative Barbara Lee, a California Democrat who is originally from El Paso, LULAC national President Domingo Garcia and a number of faith leaders, said Hiram Garcia, a LULAC member and organizer of the rally.

At least several hundred people are expected to join the march and rally, organizers said.

Patrick Crusius, 21, who is from a Dallas suburb, has been charged with capital murder in connection with the mass shooting and is being held without bond.