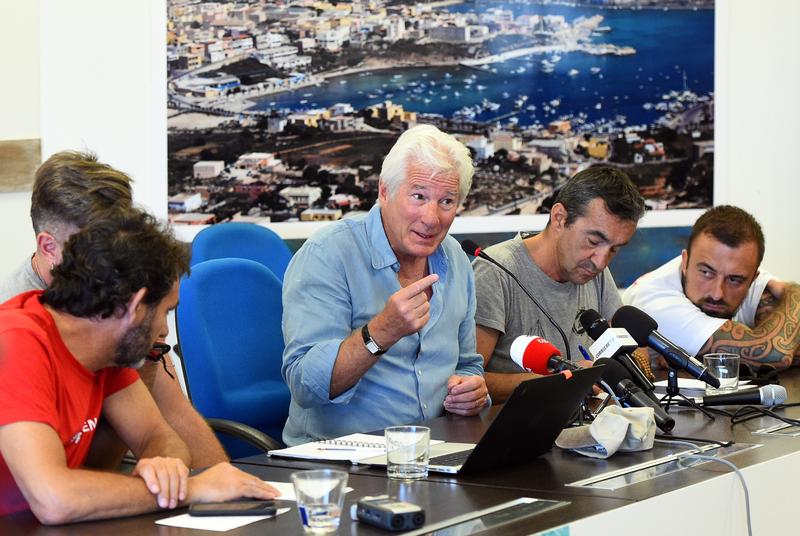 LAMPEDUSA, Italy (Reuters) – Hollywood star Richard Gere on Saturday called on the Italian government to stop “demonising people” and instead help migrants who have been stranded on a Spanish charity boat in the Mediterranean for more than a week.

Gere, who visited the Open Arms ship in a show of support on Friday, joined a news conference in the Italian island of Lampedusa to call for the 160 migrants stuck on the boat to be allowed to disembark.

He compared the political situation in Italy, where League leader and Interior Minister Matteo Salvini has repeatedly refused requests by migrant ships to dock, to that of the U.S. administration of Donald Trump.

“We have our problems with refugees coming from Honduras, Salavador, Nicaragua, Mexico… It’s very similar to what you are going through here,” he said, accusing politicians in both Italy and the United States of demonising migrants.

“This has to stop everywhere on this planet now. And it will stop if we say stop.”

Standoffs with non-governmental organization (NGO) boats have become common in the last year as European member states at odds over who should be responsible for accepting migrants have refused port to vessels carrying rescued people, often leaving them stranded at sea for days in worsening conditions awaiting a solution.

The Open Arms said it had rescued more people on Saturday.

The boat was at sea near Lampedusa with 121 people aboard from earlier rescues when, late on Friday evening, Maltese authorities asked it to assist 39 people in a wooden raft, the organization said.

Malta had offered to accept the 39 people from this rescue but not the 121 already aboard, among them 32 minors, they added, saying the NGO had refused the offer.

“[Malta] has refused to disembark the other 121 people who have been aboard for 9 days. This has created a serious security problem aboard. Their levels of anxiety are unsustainable,” Open Arms founder Oscar Camps said on Twitter.

The boat has been in limbo since Malta and Italy rejected requests to disembark there. Spain’s caretaker Socialist government accepted the Acquarius NGO boat last year following a similar standoff but has since hardened its position, saying last week that the Open Arms should look for a closer port.

This week the European Union’s executive called on member states to show solidarity and find a solution for the boat.

Reporting by Guglielmo Mangiapane in Lampedusa and Sam Edwards in Barcelona; Editing by Stephen Powell