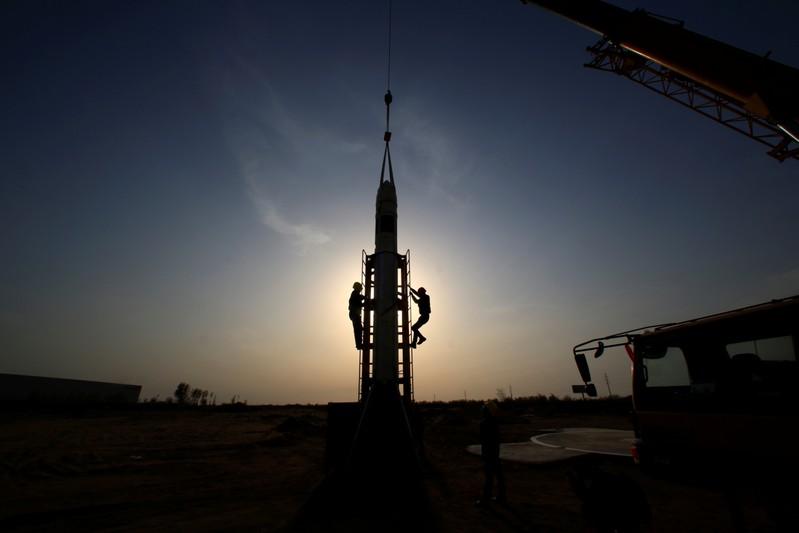 BEIJING (Reuters) – Chinese startup LinkSpace on Saturday completed its third test of a reusable rocket in five months, stepping up the pace in China’s race to develop a technology key to cheap space launches in an expected global boom in satellite deployment.

LinkSpace’s RLV-T5 rocket blasted off in a desert in western Qinghai province at 0230 GMT. It flew as high as 300 meters (984 feet) before returning to the launchpad on its own after 50 seconds, CEO Hu Zhenyu, 26, told Reuters.

The Beijing-based company aims to conduct a “kilometer-level” test at some point, Hu said.

The RLV-T5 previously hovered 20 meters and 40 meters above the ground in two tests in March and April respectively.

China envisions constellations of commercial satellites that can offer services ranging from high-speed internet for aircraft and rural areas to tracking coal shipments and commuter traffic.

Reliable, low-cost and frequent launches will be key, with recoverable or partially-recoverable rockets like the Falcon 9 from Elon Musk’s SpaceX one pathway to eventually affordable satellite deployment missions.

SpaceX has already used recoverable rockets on a number of orbital missions since a historic launch early in 2017, spurring Europe, Russia, Japan and China to speed up their own research into the technology or at least consider studying it.

LinkSpace’s test flight on Saturday came on the heels of a historic delivery of a satellite into orbit last month by privately owned Chinese firm iSpace.

Beijing-based iSpace told Reuters last week that it was also planning to launch a recoverable rocket, in 2021.

The reusable design of its next-generation rocket could lead to a predicted cost reduction of 70%, iSpace estimated.

That’s a fraction of the $25 million to $30 million needed for a launch on a Northrop Grumman Innovation Systems Pegasus, a commonly used small rocket. The Pegasus is launched from a high-altitude aircraft and is not reusable.