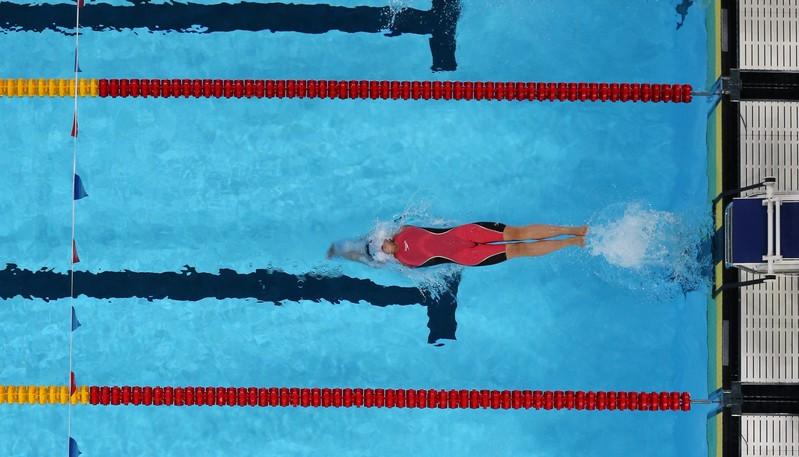 LIMA (Reuters) – Led by another productive day in the pool, the United States sailed through the 200 total medal barrier at the Pan Am Games on Thursday and warned there was more to come.

The United States will need a big finish if they are to better the 103 gold and 265 medals won four years ago in Toronto but with three days of competition remaining, including two more in the pool, they will have their chance.

With 82 gold and 206 total medals, the United States are the clear leaders in the table with Brazil surging into second on 36 golds ahead of Mexico with 27 and Canada with 26.

“We’re just getting warmed up,” said Margo Geer after winning the women’s 100 meters freestyle for her first individual gold to go along with a pair in the relays.

“I love being part of the relays but individually it’s super special to me.

“The goal here is to win as many medals as possible for our country so, so far so good.”

For the second consecutive night the United States dominated at the Centro Acuatico, sweeping gold in seven of nine finals.

Annie Lazor added the women’s 200 breaststroke title to her gold from the 100, while Andrew Abruzzo collected his third gold with victory in the men’s 800m freestyle to go with wins in the 400 and the 4x100m relay.

Geer and Bacon finished the night by grabbing yet another gold for the United States in the 4×100 medley relay.

The only events the United States failed to win were the women’s 800m free, won by Argentina’s Delfina Pignatiello, and the men’s 200 free, which went to Brazil’s Marcelo Chierighini ahead of American five-time Olympic champion Nathan Adrian.

“I’m pretty pleased where I’m at all things considered,” said Adrian, who continues his comeback from testicular cancer.

“I understand there are ups and downs, ebbs and flows to everyone’s season.

“No matter what anybody does this year, next year is going to be different.”

The United States also picked up a pair of gold medals on the wrestling mats with Whitney Conder winning the women’s freestyle 50kg title and Sarah Hildebrandt the 53kg division.

The other wrestling golds awarded on Thursday went to Ecuador’s Lissette Antes in the women’s 57kg and Cuba’s three-time Olympic champion Mijain Lopez in the men’s Greco-Roman 130kg.

The gold was also Lopez’s fifth from five Pan Ams going back to the 2003 Santo Domingo Games.

United States track and field athletes have so far missed out on the gold rush, with only Mike Rodgers in the 100m on Wednesday adding to the U.S. haul, and they were kept off the top of the podium again on Thursday.

Cuba enjoyed success, however, with Yarisley Silva grabbing her third consecutive Pan Am Games pole vault title and Adriana Rodriguez getting top spot in the heptathlon.