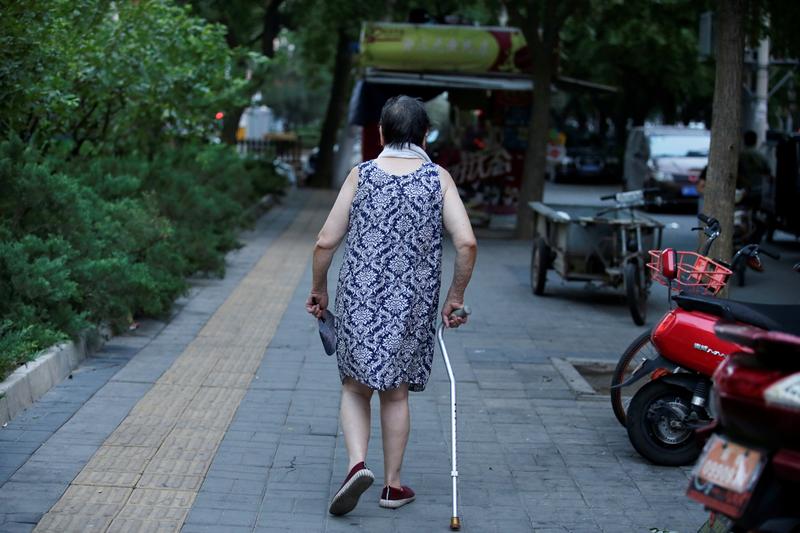 WEIFANG, China (Reuters) – Charging elderly clients just 1 yuan or about 15 cents a day, little-known Lanchuang Network Technology Corp has embarked on one of the most ambitious undertakings in aged care by a private sector firm in China.

FILE PHOTO: An elderly woman walks with a stick along a street in downtown Beijing, China July 30, 2019. REUTERS/Jason Lee

Provided with a setup box, a webcam paired with a TV set and “Xiaoyi”, a Siri-like voice assistant, customers gain access to telemedicine and an SOS system as well as for-pay services that include housekeeping and meal deliveries.

A small robot that can ring up a medical center in response to verbal calls for help costs an extra 2 yuan per day.

Launched just four months ago, Lanchuang’s smart care system has already signed up 220,000 elderly clients in 16 cities, half of which are in Shandong, a rapidly aging province in eastern China where the company is based.

It is targeting as many as 1.5 million users this year, 12 million next year and 30 million in 2021, when it hopes to list on China’s new Nasdaq-style tech board.

The aim, however, is not to make money from its clients, some of whom get by on pensions as low as a few hundred yuan a month, but to take a cut from providers of offline services.

“China’s market for elderly care is huge, but services in the industry are fragmented,” CEO Li Libo told Reuters in an interview at his company’s headquarters in Weifang city.

“Scattered on the ground are pearls,” Li, 47, said of the products and services available, adding it was his company’s aim to string them together.

Lanchuang, which is also working with China Mobile Ltd (0941.HK) on a smartphone for seniors, is an example of growing, albeit still nascent, attempts by entrepreneurs to provide comprehensive smart home care services for China’s vast number of elderly.

China has a quarter of a billion people aged 60 or over, and by 2050, that number is set to climb to almost half a billion, or 35% of the population, according to government estimates.

Liu, 66, a native of Jinan, Shandong’s capital, knows how hard taking care of the elderly can be. In her mother’s final years, her urinary tract would get obstructed despite wearing a catheter and often in the middle of the night, to her daughter’s despair.

“If only I had been able to reach a doctor to help my mother, but doctors are not reachable 24 hours a day,” said Liu, who only gave her surname.

The retired accountant, who was unaware of tech products aimed at the elderly, now lives alone and is reluctant to trouble her own daughter and son-in-law.

Care of aging parents has traditionally fallen on the shoulders of children, but in modern China, where the one-child policy was abolished only in 2016, the son or daughter has to look after as many as four aging people including in-laws. Often, children have moved to cities far away for work.

Retirement and nursing homes are on the rise, but are too pricey for most families and largely perceived as ridden with abuse. Three-quarters of old people prefer to live out their days at home, official surveys show.

While Beijing has been eager to establish a policy framework for a formal aged care system, local governments have been reluctant to support aged-care services which they see as nice-to-haves or just too much work.

But change is afoot.

In April, Beijing issued a detailed policy document outlining services to be developed for the sector, including smart technology, as well as financial support.

That level of encouragement is a far cry from a decade ago when entrepreneurs consistently met with local resistance.

“Why are you doing this? What has this got to do with me?” said U.S. entrepreneur Wang Jie, 59, as he recalled skeptical looks when he sounded out local authorities in China about trials of motion sensors at people’s homes.

Wang had to go to Canada for his trials. When he returned to Beijing in late 2013 to kick start a venture, Wang had to convince local authorities, district by district, of the virtues of his sensors – which help family members monitor activity levels of elderly people via an app but are not as intrusive as cameras.

Wang, who sits on the National Advisory Committee on Smart Elderly Care, has since managed to make inroads into two Beijing districts, with talks underway with three others.

The two districts have helped Wang identify high-risk individuals, typically those aged 70 and above, who live alone and might be willing to use his sensors.

“If an elderly person dies and the body is only discovered after three days, this creates negative publicity for the local government, publicity that it wants to avoid,” Wang said.

Entrepreneurs in other graying economies such as the United States, Britain and South Korea have similarly seized on opportunities in the sector, touting technologies from voice recognition for home appliances to robot companions for lonely old people.

But it is still early days in China.

In Weifang, Zhuojing Healthcare Center, one of 147 community medical service providers connected to the Lanchuang network, said it has only receives 1-2 calls through the system a day.

On a Reuters visit organized by Lanchuang to the homes of two elderly clients in Weifang, both said they use the platform mainly for video chats with family.

Zhao Xi’e, 55, said she uses it to talk to her mother who lives nearby.

Zhao’s shopping and food delivery panels on her TV display were grayed out, indicating zero service providers in her neighborhood.

She was also unaware the red button on her handheld control had an SOS function.

“Is that an on/off button?” she asked.