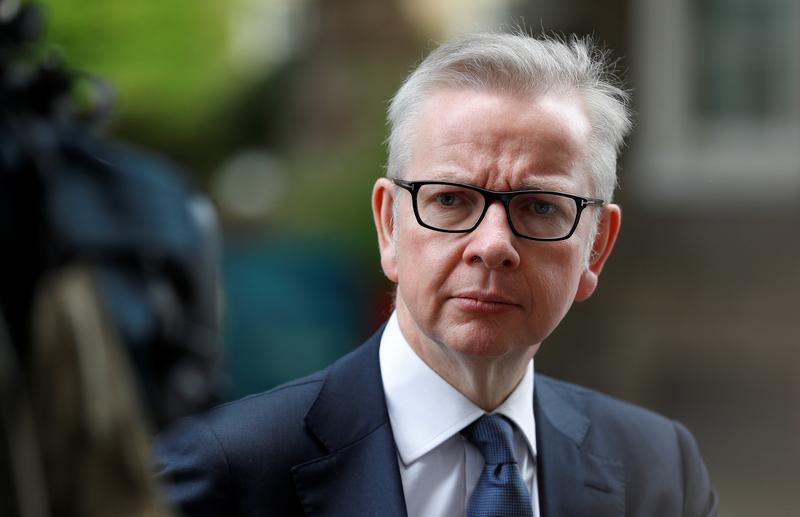 WARRENPOINT, Northern Ireland (Reuters) – Britain will spend “whatever it takes” before its departure date from the European Union to prepare for the possibility of leaving without a divorce deal, the minister responsible for planning for a no-deal Brexit said on Friday.

Britain’s Chancellor of the Duchy of Lancaster Michael Gove appears to make a statement at Downing Street in London, Britain, August 6, 2019. REUTERS/Peter Nicholls

The new government led by Prime Minister Boris Johnson said last week it would spend an extra 2.1 billion pounds on planning for no deal, which Johnson has committed to unless the EU agrees to renegotiate the deal agreed by his predecessor Theresa May by Oct. 31.

“The government has done a lot to prepare but there is still a lot to do,” Michael Gove told reporters near Northern Ireland’s border with EU-member Ireland, the future of which has proved the most contentious part of three years of Brexit talks.

Johnson’s government insists the “backstop” insurance clause within the deal aimed at preventing the return of checks at what will become Britain’s only land border with the EU will have to be struck out if there is to be an agreed exit, something the EU has repeatedly said it won’t do.

Gove said the government believed a smooth exit was still “eminently doable”. Asked what it wants to replace the backstop with, Gove said Johnson was keen to explore with EU leaders how to strike a deal that UK lawmakers could back, without giving any further detail.

He added that Britain had given an “absolutely cast iron commitment” not to put any infrastructure on the border – which was marked by military checkpoints before a 1998 peace deal ended three decades of sectarian violence in the British-run region – even in event of a no deal.

Gove was beginning a two-day visit to discuss no deal plans with businesses in Northern Ireland, which is widely seen as the most exposed UK region to the economic disruption of Brexit.

Northern Ireland’s civil service has warned a no deal could cause the loss of 40,000 jobs or almost 5 percent of the total workforce.

Warrenpoint Port Chief Executive Clare Guinness, who earlier met Gove, said she was worried that Northern Ireland’s second largest port would come to a standstill with congestion in a no deal Brexit, and what that would mean for its 70 employees and the 1,500 workers reliant on the port.

“I just hope he listened. We pleaded with him, we really were pleading with him to avoid no deal. Not only the economic impact here in Northern Ireland but the social impact,” Guinness told reporters.

“He didn’t give us any assurances, he said that he was trying his best and this type of thing. I asked him if he had a magic wand because we do need some sort of magic to come along and solve this problem.”