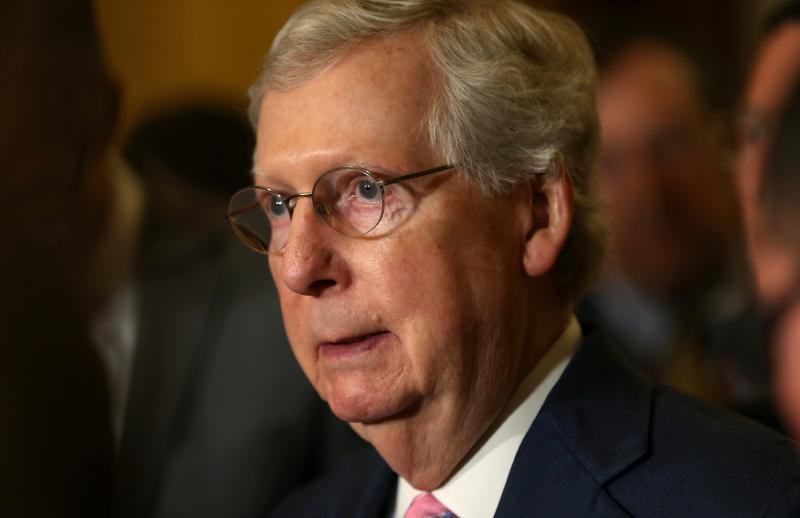 (Reuters) – Republican Senate leader Mitch McConnell said on Thursday he would not call the Senate back early to consider new gun legislation, rejecting a plea from more than 200 U.S. mayors, including two whose cities endured mass shootings last weekend.

In a letter to the senate majority leader and Democratic leader Chuck Schumer, the 214 mayors urged the Senate to vote on House approved legislation expanding background checks for guns sales without waiting for the end of summer recess. The letter was prompted by shootings in El Paso, Texas and Dayton, Ohio about 13 hours apart that killed 31 people and wounded dozens.

“The tragic events in El Paso and Dayton this weekend are just the latest reminders that our nation can no longer wait for our federal government to take the actions necessary to prevent people who should not have access to firearms from being able to purchase them,” said the letter signed by members of the United States Conference of Mayors.

McConnell said he has asked for bipartisan discussions on the matter, including possible restrictions on assault gun sales.

“We’re going to have these bipartisan discussions and when we get back (from the recess), hopefully, be able to come together and actually pass something,” McConnell said in an interview with Kentucky radio station WHAS. “I want to make a law and not just see this kind of political sparring going on.”

Asked about restrictions on assault weapons, McConnell said, “That will probably be discussed as well. It’s certainly one of the front and center issues.” But he said “background checks and red flags would probably lead the discussions.”

He added that President Donald Trump “is very much open to this discussion.”

The National Rifle Association (NRA), a key donor to many Republican senators, indicated in a statement on Thursday it will oppose any further gun restrictions.

“I’m not inclined to discuss private conversations with President Trump or other key leaders on this issue,” NRA Chief Executive Wayne LaPierre said in a statement.

“But I can confirm that the NRA opposes any legislation that unfairly infringes upon the rights of law-abiding citizens. The inconvenient truth is this: the proposals being discussed by many would not have prevented the horrific tragedies in El Paso and Dayton,” he said.

The Democratic-led House of Representatives in February passed a bill calling for universal background checks for gun buyers. The measure would close loopholes that have allowed some sales over the internet and at gun shows to be finalized without background checks.

A second bill also passed by the House in February would extend to 10 business days, from the current three, the amount of time for the background checks if information on a gun sale application is incomplete.

Neither has been taken up by the Republican-controlled Senate, while the White House earlier this year floated veto threats against both bills. On Wednesday, Trump said he wanted to strengthen background checks for gun purchases as he left the White House to visit Dayton and El Paso.

“The Republicans are held by the throat by the NRA,” Democratic presidential candidate U.S. Senator Elizabeth Warren told a rally in Council Bluffs, Iowa, on Wednesday night. “Enough is enough.”

The mayors, including El Paso’s Dee Margo, a Republican, and Dayton’s Nan Whaley, a Democrat, urged early voting on the two background checks bills, pointing out that the United States had 250 mass shootings so far in 2019.

“This is common sense gun legislation that the vast, vast majority of Americans support,” Whaley said during a call with reporters on Thursday. “All we are asking is for Congress to do their job to help our communities be more safe.”

“In both clear language and in code, this president has fanned the flames of white supremacy in this nation,” Biden said in a speech in Burlington, Iowa.

The NRA accused U.S. presidential candidates of using the shootings for political gain.

“Unfortunately, aspiring presidential candidates immediately took to the airwaves this past weekend to politicize these tragedies, and to demonize the NRA and its 5 million law-abiding members,” the gun rights lobby said.