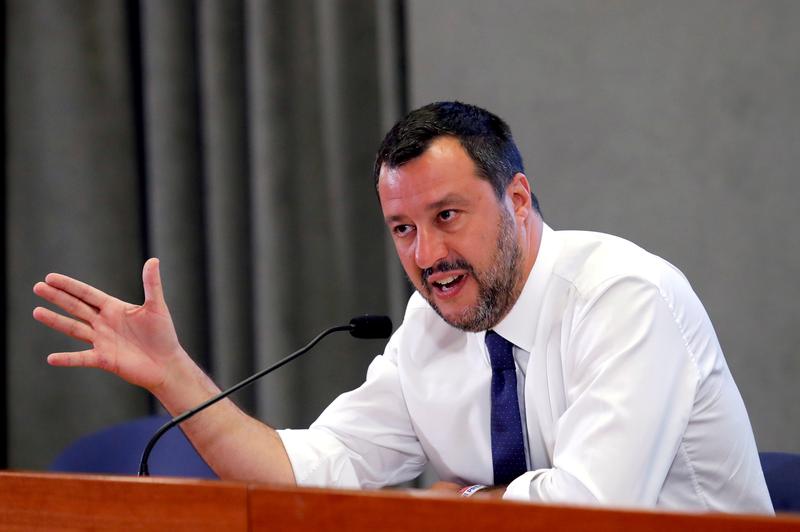 ROME (Reuters) – The leader of Italy’s ruling League party, Deputy Prime Minister Matteo Salvini, declared the governing coalition to be unworkable on Thursday after months of internal bickering and said the only way forward was to hold fresh elections.

The shock announcement follows a period of intense public feuding between the right-wing League and its coalition partner, the anti-establishment 5-Star Movement, and it throws the euro zone’s third-largest economy into deeper political uncertainty.

Salvini said in a statement he had told Prime Minister Giuseppe Conte, who belongs to neither coalition party, that the alliance with 5-Star had collapsed after barely a year in power and “we should quickly give the choice back to the voters”.

Parliament, which is now in its summer recess, could reconvene next week to carry out the necessary steps, Salvini said, referring to the need for a no-confidence vote in the government and the resignation of the premier.

Conte said later in a brief televised statement that Salvini must explain to Italians why he wanted to bring down the government and that “the crisis he has unleashed” should be the most transparent “in the history of the republic”.

Conte said he would no longer accept Salvini’s attacks on his ministers and accused him of relying on “slogans”.

Until a few weeks ago Salvini had repeatedly said that the government would last a full five-year term, but he brushed off Conte’s criticisms and said 5-Star was holding up the policies the country needed to boost its stagnant economy.

“Italy can no longer put up with the no’s, we need yes’s, we need to unblock, to build, to work — enough is enough, we must go to elections,” he told reporters after a rally in Pescara, on the Adriatic coast.

Tensions came to a head on Wednesday when 5-Star and the League voted against each other in parliament over the future of a project for a high-speed train link with France.

5-Star has more parliamentary seats than the League, but Salvini’s party now has twice as much voter support, according to opinion polls, and it has recently threatened to try to capitalize on that surge in popularity with new elections.

However, it remains to be seen if things will go as Salvini plans. Pushing the nation back into election mode in August, when Italians are on holiday and parliament is closed for the summer recess, is unusual and could be unpopular and risky.

President Sergio Mattarella is the only person with the power to dissolve parliament, and may be unwilling to do so ahead of preparatory work in September for the 2020 budget, which must then be presented to parliament the following month.

Italy, which has Europe’s second-largest sovereign debt burden after Greece, has already angered the European Union with an expansionary 2019 budget and Salvini wants to make major tax cuts next year, setting up the prospect of another EU clash.

Italy has not held an election in the autumn in all the post-war period.

If Mattarella decides not to dissolve parliament, he could try to install an unelected “technocrat” administration of which there have been several examples in Italy’s recent history, though an alternative parliamentary majority appears elusive.

“We are ready, we don’t care in the least about occupying government posts and we never have,” he said in a statement. He accused Salvini of “taking the country for a ride” and said sooner or later Italians would turn against him for it.

Speculation of a government crisis mounted late on Wednesday when Salvini, speaking at a rally south of Rome, peppered his speech with hints that he had had enough of 5-Star, accusing it of stalling the League’s key policies.

Markets sold off Italian government bonds early on Thursday and the day proceeded with closed-door meetings between Salvini and Conte and between Conte and Mattarella.

The League issued a statement listing a raft of areas in which it had a “different vision” from 5-Star, including infrastructure, taxes, justice and relations with the EU.

The two parties were fierce adversaries ahead of an inconclusive election in March 2018, before forming their unlikely alliance which has often ruffled the feathers of financial markets and the European Commission.

5-Star was the largest party at last year’s elections but it has struggled since the government was formed, while Salvini has prospered thanks to his popular hard line on immigration and a charismatic and informal “man of the people” public image.