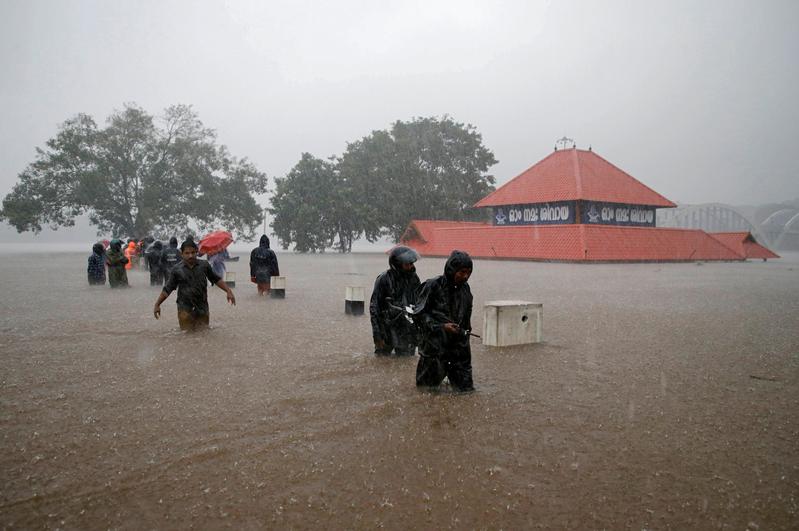 MUMBAI/BENGALURU (Reuters) – Floods brought by heavy rains and overflowing rivers across large swathes of western and southern India have killed at least 33 people and forced the evacuation of 180,000 from their homes, officials said on Thursday.

Members of a rescue team wade through a water-logged area past a submerged temple during heavy rains on the outskirts of Kochi in the southern state of Kerala, India, August 8, 2019. REUTERS/Sivaram V

Seasonal monsoon rains from June to September cause deaths and mass displacement across South Asia every year, but they deliver more than 70% of India’s rainfall, crucial for farm output and economic growth.

The tally of dead in the floods was 25 in the western state of Maharashtra by Thursday, officials said, while government data in the neighbouring southern state of Karnataka showed eight dead.

Rivers burst their banks in some parts of Maharashtra after authorities released water from dams brimming with as much as 670 mm (26.4 inches) of rain received in a week.

“If we get more rainfall, then we have no option but to release water in rivers,” said administrative official Deepak Mhaisekar, adding that many reservoirs around the state’s industrial city of Pune were full.

A boat full of villagers trying to escape the floods capsized on Thursday, killing at least 9 people, with rescuers searching for three or four still feared missing, he added.

Thousands of trucks were stuck on a national highway linking the financial capital of Mumbai with the southern technology hub of Bengaluru, as waters submerged the road in some places, Mhaisekar said.

In Karnataka, officials said some major reservoirs were nearly full, and warned that nearby villages could be hit by large discharges of water.

“We have sought help from the central government to rescue any people who may get stranded because of the floods,” Chief Minister B.S. Yediyurappa told media.

Temples and electric poles were underwater as the floods flowed unabated, in video images posted by a journalist in a northern district of Karnataka.

Weather officials have forecast heavy rain in the region, including the nearby states of Kerala and Goa, over the next three to five days.

Kerala weather officials called a “red alert” in four districts they saw at risk of receiving more than 200 mm (8 inches) of rain on Thursday.

Schools and colleges in many places have been shut since Monday and are unlikely to open this week, authorities have said.

Reporting by Rajendra Jadhav in Mumbai and Derek Francis in Bengaluru; Editing by Euan Rocha and Hugh Lawson