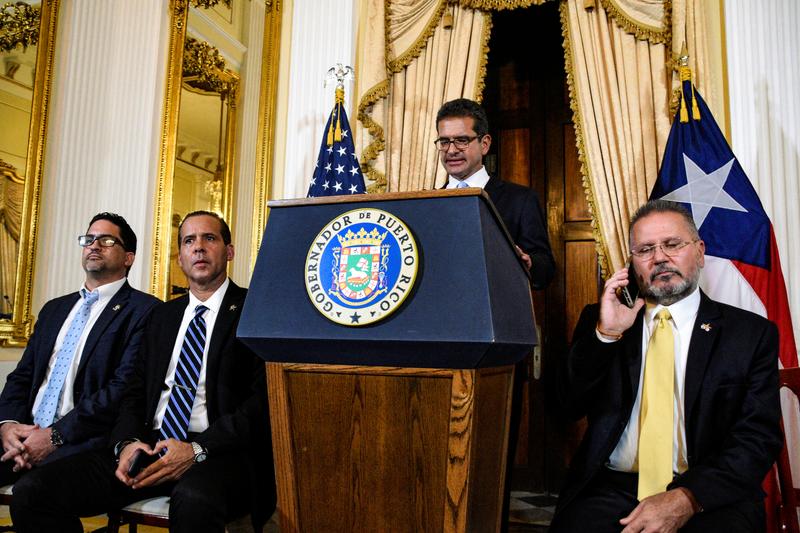 SAN JUAN (Reuters) – Puerto Rico’s newly installed governor and its Senate president faced off on Tuesday in written arguments submitted to the island’s supreme court, which will decide who is in charge of the bankrupt government.

Both sides agreed that Puerto Rico is facing its biggest constitutional crisis after days of protests forced Governor Ricardo Rossello to leave office on Friday.

Pedro Pierluisi, Rossello’s handpicked successor, is fighting a constitutional challenge filed by Senate President Thomas Rivera Schatz over Pierluisi’s appointment as secretary of state, a position next in line to the governor.

Pierluisi was sworn in as governor on Friday after the Puerto Rico House confirmed him as secretary of state, without confirmation from the Senate. On Sunday, Schatz filed a lawsuit claiming his chamber’s advice and consent duty under the island’s constitution was usurped and Pierluisi should be removed from office.

It was unclear if the Supreme Court would schedule oral arguments in the case, although a ruling was widely expected to be issued soon given the political turmoil.

Pierluisi’s legal brief warned that if the high court decides in favor of the Senate, “it would have a disastrous impact on Puerto Rico’s governance,” and jeopardize the island’s stability.

The governor’s lawyers argued that Pierluisi was legally secretary of state even without confirmation because the legislature was not in session.

Under normal circumstances, an appointment made during a legislative recess would be subject to a legislative vote once lawmakers reconvene for their regular session. However, the fact that Pierluisi ceased being secretary of state once he was sworn in as governor makes that requirement moot, the brief stated.

The Senate president’s brief argued that both legislative chambers need to confirm a secretary of state nominee under Puerto Rico’s constitution.

Puerto Rico’s Justice Secretary Wanda Vazquez, another Rossello appointee, would be next in line for governor should the court rule against Pierluisi.

At a Tuesday press conference, Pierluisi assured the public that “the government continues to function.”

His assumption of office capped more than a week of political chaos after Rossello said he would resign over offensive chat messages that drew around a third of the island’s 3.2 million people to the streets in protest as well as federal corruption charges against two former members of his administration.

Pierluisi has been controversial mainly because he formerly gave legal advice to the island’s unpopular, federally created fiscal oversight board.