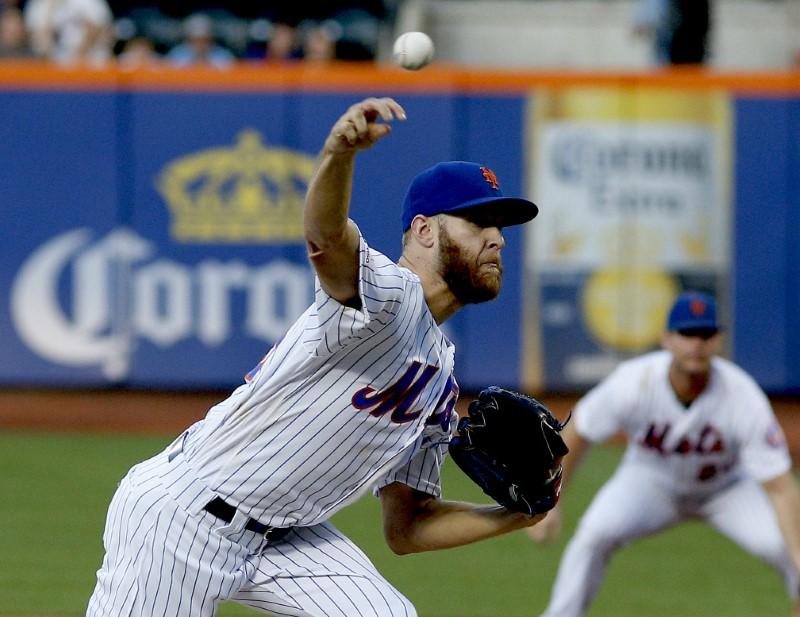 Zack Wheeler scattered eight hits over eight scoreless innings Tuesday night for the red-hot New York Mets, who locked up another series win with a 5-0 victory over the visiting Miami Marlins.

Wilson Ramos hit a three-run homer and Pete Alonso added a solo blast for the Mets, who have won the first three games of the four-game series and 12 of their past 13 to move two games over .500 (58-56) for the first time since April 24.

Wheeler (9-6) struck out five, walked one and induced 13 ground-ball outs while throwing 101 pitches, including 72 for strikes. The Marlins hit into three double plays, stranded eight runners and went 0-for-13 with runners in scoring position.

Correa added three RBIs while Brantley drove in two runs. Yordan Alvarez also hit a two-run homer for Houston, which won its fifth game in a row and eighth in the past nine.

The offensive onslaught made the struggles of Zack Greinke an afterthought. Greinke (11-4) scuffled in his Astros debut, allowing five runs on six hits and two walks with two strikeouts over six innings, but he emerged with the win.

Freddie Freeman homered and drove in four runs, and Ronald Acuna Jr. went 3-for-5 with a home run and four runs as Atlanta jumped out to an 11-run lead and then held on for a victory over Minnesota in Minneapolis.

Ozzie Albies went 4-for-6 with three runs and two RBIs, including a run-scoring triple to highlight Atlanta’s six-run sixth inning. Freeman collected three hits, Brian McCann had two hits and three RBIs, and Ender Inciarte also had two hits for the Braves, who out-hit the Twins 16-10.

Nelson Cruz went 4-for-5 with two home runs and four RBIs, and Mitch Garver and Eddie Rosario also went deep for Minnesota. It was the sixth multi-homer game of the season for Cruz, tying the franchise record set by Hall of Famer Harmon Killebrew in 1964.

Dustin Garneau and Stephen Piscotty each hit three-run home runs, and Oakland cruised to a win at Chicago.

Piscotty added a run-scoring single to finish with four RBIs as Oakland earned its seventh win in nine games. Matt Olson added a pair of RBIs, while Mark Canha and Chad Pinder drove in one run apiece.

Austin Romine, Brett Gardner and Cameron Maybin also homered as the Yankees twice hit back-to-back homers and won their seventh straight. The Yankees have hit 38 homers in Baltimore in 2019, a major league record for homers in an away ballpark.

Jonathan Holder served as the opener for the Yankees and gave up two runs in 2 2/3 innings. Nestor Cortes Jr. (5-0) earned the victory later with 2 1/3 innings of shutout relief after a 72-minute rain delay at the start, and Adam Ottavino got his first save as a Yankee.

Eugenio Suarez clubbed his 30th home run, and rookie Aristides Aquino and Jose Iglesias also went deep for Cincinnati, which has won three in a row and eight of 11. It was the fourth time in 2019 that the Reds homered five times. The Angels matched a season worst with their sixth straight defeat.

Veteran catcher Barnhart produced his first multi-homer game. Aquino highlighted the Reds’ second three-run inning of the game when he homered in the fourth — his second in six contests since being called up from Triple-A Louisville last week. The right fielder also made a back-handed running catch to thwart the Angels’ bases-loaded threat in the eighth.

Kevin Kiermaier scored the winning run on a wild pitch with two outs in the bottom of the 10th inning as Tampa Bay overcame an early six-run deficit to defeat Toronto in St. Petersburg, Fla.

Yasmani Grandal doubled twice, driving in one run and scoring one, as Milwaukee prevailed at Pittsburgh.

Bryan Reynolds homered while Jose Osuna and Pablo Reyes each had an RBI double for Pittsburgh, which has lost four straight and 14 of its last 16.

Milwaukee starter Chase Anderson pitched 5 2/3 innings, giving up two runs and six hits, with four strikeouts and one walk. Junior Guerra (4-3) got the final out of the sixth in earning the win. Matt Albers gave up a run in the ninth but recorded his second save.

Jorge Soler homered twice to eclipse 30 for the season as Kansas City snapped a seven-game losing streak with a win at Boston.

Ryan O’Hearn also went yard as the Royals won for just the second time in their last 12. Kansas City also ended a franchise-long run of eight straight losses to Boston.

J.D. Martinez and Christian Vazquez had two hits apiece for the Red Sox, who fell for the ninth time in their past 10 contests. Boston had a record streak of 18 straight games at Fenway Park with a home run come to an end.

Jose Abreu had three hits, including a solo homer, and drove in three runs, rookie Dylan Cease recorded his second career victory, and Chicago topped host Detroit in the opener of a day-night doubleheader.

Jordy Mercer hit a two-run homer and drove in three runs, and host Detroit snapped its five-game losing streak with a triumph over Chicago in the second game of the doubleheader.

John Hicks had three hits, scored twice and drove in a run, and Miguel Cabrera supplied three hits and scored twice. Gordon Beckham contributed two hits, two runs and an RBI. Drew VerHagen (2-2) recorded his first career win as a starting pitcher. He gave up one run on seven hits in five innings.

Ryan Goins had three hits and drove in two runs for Chicago. Leury Garcia supplied three hits, a run and an RBI.

The scheduled game between Texas and host Cleveland was postponed due to inclement weather. The teams will play a doubleheader Wednesday afternoon.

Play was delayed before a pitch was thrown Tuesday, and after a 15-minute delay, the announcement was made that the game was postponed.