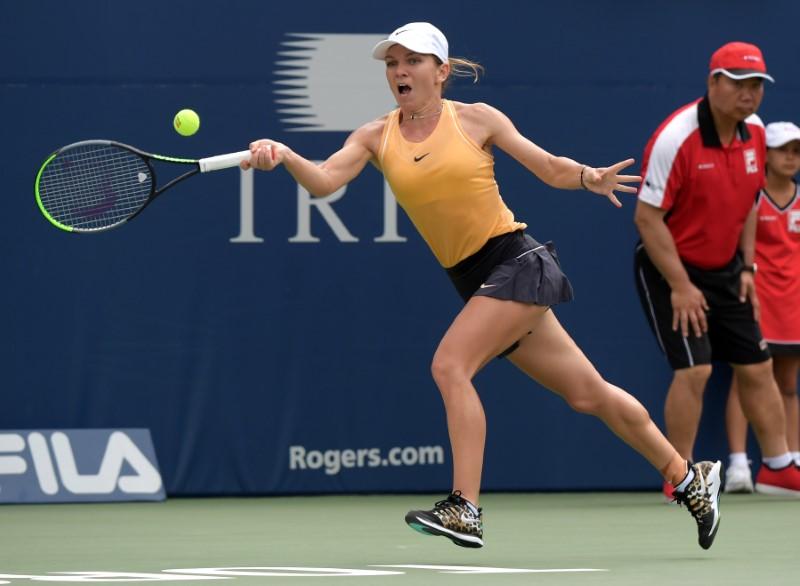 TORONTO (Reuters) – Wimbledon champion Simona Halep survived a stern test from American qualifier Jennifer Brady with a 4-6 7-5 7-6(5) victory to reach the last 16 on Wednesday and keep alive her hopes of a second consecutive Rogers Cup title.

Halep, playing her first match since her Wimbledon triumph, built a 4-0 cushion in the deciding set but had to dig deep after Brady mounted an strong comeback.

Fourth seed Halep, who requested a medical timeout to get treatment on her left leg after the second set, clinched the two-hour, 26-minute battle on her second match point when a Brady backhand caught the top of the net.

“She played great and … she made a great match and was really difficult to play against,” Halep said in her on-court interview after her first career meeting with Brady.

Halep struggled through the first half of the second-round match and was tentative with her movement but suddenly elevated her game when she broke to get ahead 4-3 in the second set en route to setting up a wild decider.

The Romanian broke to love to open the third set and was in complete control until Brady, who looked strong and steady until late in the tiebreak, used her massive forehand to roar back into the match.

Very little separated Brady and the former world number one early in the tiebreak but Halep’s tactical experience and shot-making proved the difference in the end.

Next up for Halep, who won the event last year in Montreal, will be the winner of Wednesday’s match between Croatia’s Donna Vekic and Russian wildcard Svetlana Kuznetsova.

In other early action, Ukrainian sixth seed Elina Svitolina, who won in Toronto two years ago, beat Czech Katerina Siniakova 6-3 3-6 6-3 to reach the third round.

Czech third seed Karolina Pliskova, who could replace Australian Ash Barty atop the world rankings with a deep run this week, also reached the last 16 with a 6-4 6-7(4) 6-2 win over American qualifier Alison Riske.

Pliskova will next face Estonian Anett Kontaveit, who was ahead 7-5 3-1 when Spaniard Carla Suarez Navarro retired with a hip injury.

Ukrainian teenager Dayana Yastremska, who has won titles in Strasbourg and Hua Hin this year, did well to shake off the nerves and secure a 7-5 7-5 upset victory over former world number one Victoria Azarenka.

Three-times champion Serena Williams, who has said she wants to get more matches in before seeking a record-equalling 24th career Grand Slam title at the Aug. 26-Sept. 8 U.S. Open, kicks off the evening session against Belgian Elise Mertens.

Reporting by Frank Pingue in Toronto, editing by Ed Osmond