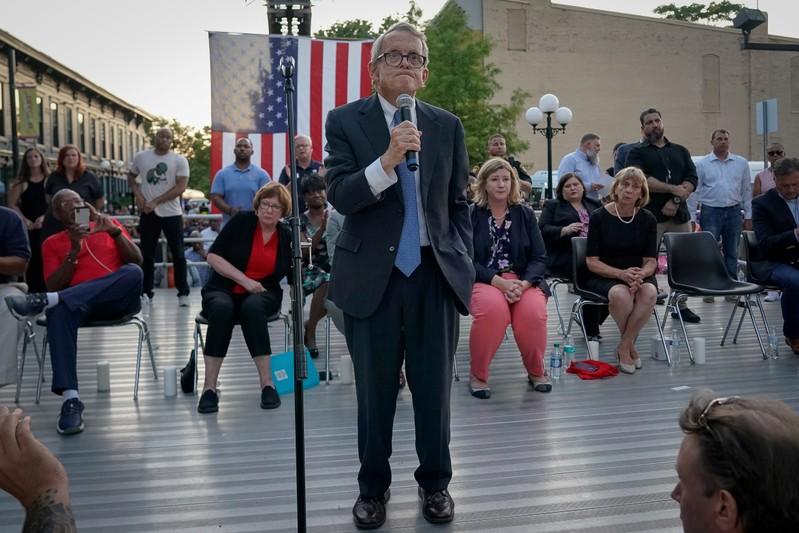 (Reuters) – Ohio Governor Mike DeWine proposed a “red flag” law that would allow authorities to take guns away from people who may harm themselves or others, responding to pressure for him to “do something” after a mass shooting in Dayton that killed nine people.

Ohio Governor Mike DeWine reacts as vigil attendees shout “Do Something” while he was speaking at a vigil at the scene after a mass shooting in Dayton, Ohio, U.S. August 4, 2019. REUTERS/Bryan Woolston

The Republican governor said he supported legislation that would allow judges to temporarily confiscate guns from individuals believed by police or their relatives to be a danger, and to provide them with mental health treatment.

“We have an obligation to each other,” DeWine said at a news briefing. “If someone is showing signs of trouble or problems, we must help and we must not turn away.”

DeWine spoke three days after a gunman wearing body armor and a mask opened fire in a crowded Dayton, Ohio, neighborhood known for its nightlife early on Sunday. It was the second deadly U.S. mass shooting in less than a day.

The governor was heckled on Sunday night as he spoke at a vigil for the victims of the rampage. Protesters repeatedly chanted “Do something!,” a reference to perceived state and federal inaction to curb U.S. gun violence.

“Some chanted ‘Do something!’ and they’re absolutely right,” DeWine said on Tuesday. “We must do something, and that is exactly what we’re going to do.”

Gun control is one of the most divisive issues in American politics. Supporters of tighter restrictions say they are necessary to staunch a U.S. epidemic of gun violence, while opponents believe more controls would violate gun ownership rights under the U.S. Constitution’s Second Amendment.

In an address to the nation on Monday, President Donald Trump also backed “red flag” laws to allow guns to be taken away from dangerous individuals. Seventeen states and the District of Columbia currently have such laws in place, according to the Giffords gun-control group.

The president proposed tighter monitoring of the internet, mental health reform and wider use of the death penalty in response to the two mass shootings over the weekend that left 32 people dead in Texas and Ohio.

Police named the Ohio gunman as Connor Betts, a 24-year-old white male from Bellbrook, Ohio, and said he was armed with an assault-style rifle fitted with an extended drum magazine that could hold 100 rounds.

The killings in Dayton began at around 1 a.m. on Sunday in the city’s Oregon District and ended rapidly when nearby police moved in and shot Betts dead. At least 14 people were wounded by gunfire, while others were injured as they fled. Six of the nine people killed were black.

The gunman shot at least 41 bullets in the seconds before he was killed, Dayton Police Chief Richard Biehl told reporters on Monday. Police officers ended the rampage in about 30 seconds, Biehl said on Sunday.

The shooting in Dayton, a riverfront city of about 140,000 people in southwestern Ohio, took place just 13 hours after a mass shooting at a Walmart store in El Paso, Texas, where 22 people were killed. The 21-year-old suspect in that shooting was arrested.

Sunday’s massacre occurred a week after a teenager killed three people with an assault rifle at a food festival in Northern California before taking his own life.