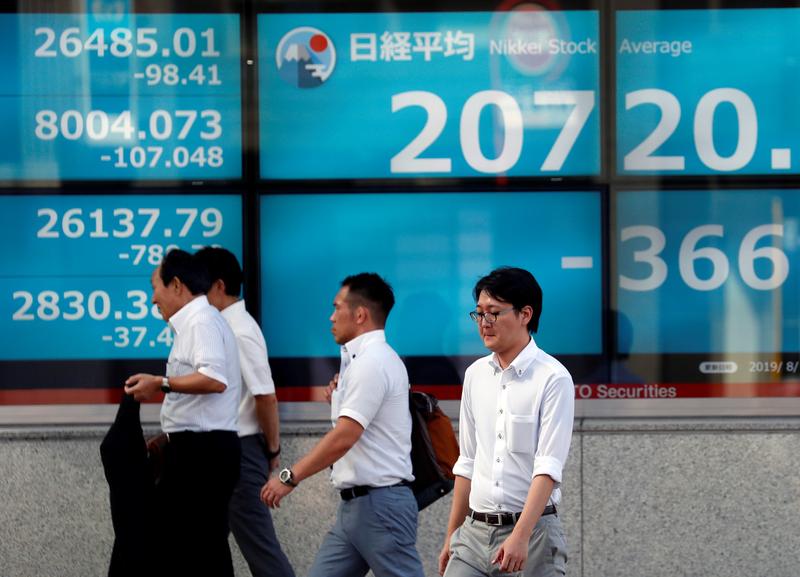 Safe-haven assets, including bonds and some currencies such as the yen and Swiss franc, benefited as investors scurried to avoid risk.

U.S. Treasury Secretary Steven Mnuchin said on Monday the government had determined that China is manipulating its currency, and that Washington would engage the International Monetary Fund to eliminate unfair competition from Beijing.

“Given the fragile state of markets, this is likely to be viewed as an escalation of the trade war and exacerbate the market sell-off,” wrote Steve Englander, head of global G10 FX research at Standard Chartered Bank.

“In market terms, the designation, however meretricious, will likely be seen as a further ramping up of the trade dispute and possibly leading to some reaction by China.”

The Trump administration’s dramatic move against China hastened the risk aversion seen in global markets this week. On Monday, China let the yuan slide in response to the latest U.S. tariffs, which are expected to further aggravate trade tensions between the world’s two largest economies.

MSCI’s broadest index of Asia-Pacific shares outside Japan .MIAPJ0000PUS fell 1.5% to its lowest level since January.

“Following the latest development in the U.S.-China trade war, all the economic views and moves in the currency and equity markets are driven by a ‘risk off’ mentality, which in turn is boosting bonds,” said Kota Hirayama, senior emerging markets economist at SMBC Nikko Securities.

“The fact that U.S. yields are falling sharply even though Federal Reserve Chairman Jerome Powell did not signal further easing explains it all.”

S&P 500 futures ESc1 were down 0.5% in Asian trade. Wall Street’s major indexes posted their biggest percentage drop of the year on Monday on concerns about the U.S.-China trade war.

MSCI’s All Country World Index, which tracks shares in 47 countries, extended last week’s slide and slumped 2.5% to a two-month low on Monday.

The Chinese yuan CNY= onshore fell to an 11-year low on Tuesday, brushing 7.0699 per dollar. In a symbolic move, Beijing let the yuan breach 7-per-dollar on Monday for the first time since late 2008.

China’s offshore yuan stretched the previous day’s slide, weakening to 7.1288 CNH=D4, the lowest level since international trading in the Chinese currency began in 2010. It last traded at 7.0945.

The Japanese yen, a perceived safe-haven in times of market turmoil and political tensions, touched a seven-month high of 105.520 per dollar JPY= before slipping back to 106.290.

The Swiss franc, another currency sought in times of turmoil, has gained roughly 1% against the dollar this week. It touched a six-week peak of 0.9700 franc per dollar CHF=.

The 10-year U.S. Treasury yield extended sharp falls overnight and declined to 1.672%, its lowest since October 2016.

Brent crude oil futures plumbed a seven-month low of $59.07 per barrel as the trade war raised concerns about lower demand for commodities. Brent last traded at $59.89.