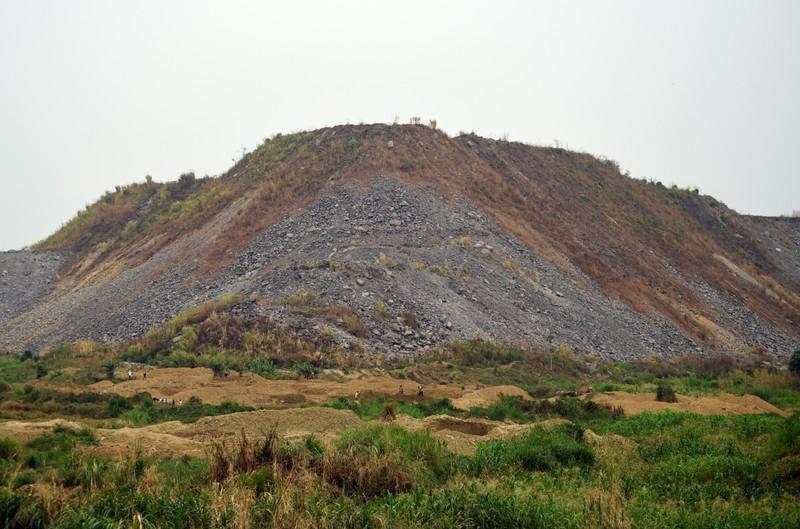 FREETOWN, August 6 (Reuters) – At the foot of a slag heap some 40 meters high, Adi Kalie Bangura showed the black welts that dot his arms and legs that he says are the result of drinking and bathing in water contaminated by Sierra Leone’s largest diamond mine.

FILE PHOTO: The slag from the Octea diamond mine sits above the diamond-rich Koidu city, Sierra Leone March 22, 2019. REUTERS/Cooper Inveen

The water “makes us get headaches and feel sick in our stomachs,” said Bangura, a traditional healer and community elder in Koidu, the largest city in the West African country’s diamond-rich Kono district. The aluminium roof of the mud brick house he shares with a dozen family members is pockmarked by holes he says are the result of rocks loosened by years of blasting by the mine.

Bangura’s claims are part of those made by a group of Koidu residents in a lawsuit against diamond mining firm Octea Limited and related companies, highlighting how communities in developing countries are becoming increasingly emboldened to use courts to pursue grievances against mining firms.

The group alleges Octea poisoned the water, destroyed houses and failed to relocate hundreds of households away from the blasting. According to a 2003 mining-license agreement, the Octea subsidiary that operates the mine Koidu Limited said it would relocate all households within 500 meters of the mine.

The complaint, filed in Sierra Leone’s High Court in March, claims $288 million in damages for “degradation or destruction of land, destruction of homes and loss of livelihoods and …dumping of toxic mine waste,” among other things. On July 22, a judge ruled the case was “adjourned for judicial recess” until the end of September.

In an email response to Reuters, Octea, which operates the mine, said the allegations were “baseless and without merit.”

Octea is a subsidiary of BSG Resources, founded by Israeli billionaire Beny Steinmetz. A spokesman for Guernsey-based BSG Resources directed Reuters’ request for comment to Octea, which also is based in Guernsey, according to the spokesman.

Ibrahim Turay, the finance director of Octea subsidiary Koidu Limited, in documents filed by the defendants with the court in May said: “this action is an attempt to exploit [the mine] at the expense of national development and nothing more.”

Steinmetz didn’t respond to a request for comment sent to the BSG Resources spokesman. Neither BSG Resource nor Steinmetz are named as defendants in the suit.

The number of high-profile lawsuits against foreign natural resource firms filed by communities in developing countries nearly doubled over the last decade to 30, up from sixteen filed between 1998 and 2008, according to data from Business & Human Rights Resource Centre (BHRRC), a UK-based organization that tracks the human rights policy and performance of companies.

The data show success by the residents has been mixed.

Those 30 cases do not include some lower-profile suits, including the action against Octea, based on Reuters’ analysis of the data.

The complaint against Octea is only the third time that a large foreign company from the extractive industry has faced a challenge in Sierra Leone’s courts, according to local legal specialists.

In the March suit filed by Koidu residents, the 73 plaintiffs who all live within 500 meters of the mine say they have suffered coughing fits, respiratory infections and headaches from living around the mine, according to court documents.

Lawyers for the residents told Reuters they believe some of the health problems are the result of highly acidic water draining from the mines without proper treatment and affecting water sources nearby.

In its response to Reuters, the mining company said: “Octea Limited and all its subsidiaries including Koidu Limited, have always adhered and continue to adhere to the highest standards of health and safety according to international best practice,” the statement said.

It added that the Koidu mine “has not used harmful chemicals in any of the blasting processes” and now only blasts underground which has “no environmental or social impact.”

Koidu residents also allege compensation has been insufficient. Local landowner Kumba King said her livelihood was impacted following damage to her crops and trees and that the 60 million leones, or about $6,500, of compensation she received on behalf of the mine for those and her house was “considerably lower” than their value, according to court filings.  She added in the court filings that Octea and its affiliates have never offered to relocate her.

In its response to Reuters, Octea said all local residents within the 500-metre safety zone “have been compensated in full” in accordance with local regulations and laws and international standards.

The defendant companies said in court filings that they have built 858 houses for the relocation of residents outside the safety zone around the mine, and they have nearly 400 more houses to build.