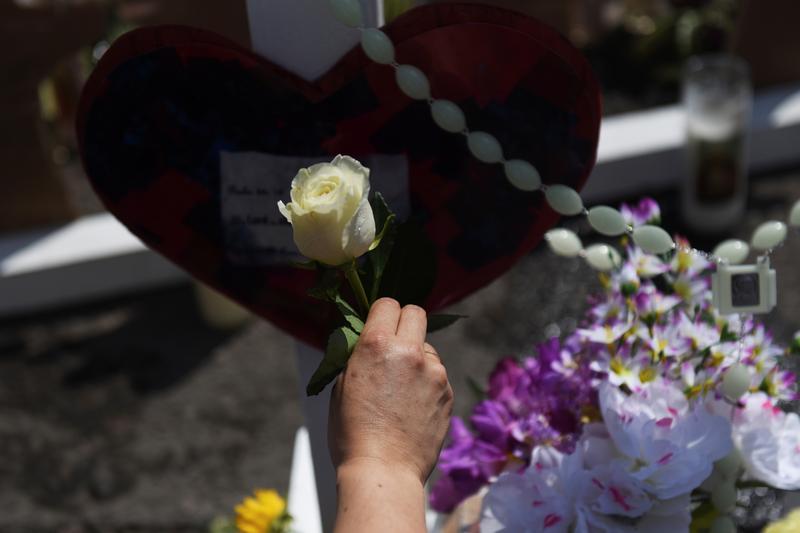 EL PASO, Texas (Reuters) – Volunteers on Monday planted crosses, each representing a fatality in Saturday’s mass shooting at a Walmart store in El Paso, Texas, at a shrine to the victims that included “El Paso strong” signs, flowers, candles, bible verses and U.S. and Mexican flags.

A woman places a rose on a cross as people gather to pay their respects at a growing memorial site two days after a mass shooting at a Walmart store in El Paso, Texas, U.S. August 5, 2019. REUTERS/Callaghan O’Hare

Police have not released the names of the victims of the attack, which authorities have called an act of domestic terrorism that appeared to target Hispanics. Hours later, a separate mass shooting in Dayton, Ohio, killed nine people. The attacks injured dozens more.

Greg Zanis of Crosses for Losses, who has been making white, waist-high wooden crosses for victims of tragedies since 1986, provided them for the shrine to the victims near the Walmart store.

“Today is the worst day. I’m going to have to go to Dayton, Ohio, right now. I don’t know how I can handle this day,” Zanis told reporters at the shrine.

Zanis said he has made more than 26,000 crosses since the master carpenter began his one-man mission after finding the body of his father-in-law, who had been shot to death.

In 1999, he erected 13 crosses in Colorado in honor of the victims of the shooting rampage at Columbine High School. Last year he went to Pittsburgh to deliver 11 Stars of David in remembrance of the worshippers shot dead on Oct. 27 at the Tree of Life synagogue, and barely two weeks later to Thousand Oaks, Calif., for the 12 victims of a shooting there, and then to Paradise, Calif., the following month after a wildfire destroyed the town, killing at least 85.

He was even forced into action for a workplace shooting on Feb. 15 in his home town of Aurora, Illinois that killed six.

“These people all don’t think it will happen in their towns, and I was dumb enough to think it wouldn’t happen in mine,” Zanis said.

At least eight of the victims in the border city of El Paso were Mexican nationals. One funeral home is offering free cremation services for the victims as the city mourned.

At the Walmart shrine, Tony Basco, 61, planted a cross for his partner of 22 years, Margie Reckard, 67, according to the name and age on the cross.

“I’ve been lost. I’m like a puppy run away from its momma. She took care of me,” Basco said. “But my wife, she’d say get up off your rear end and grow up. Because now I’ve got to take care of the bills, take care of the cat.”

Basco was unaware Zanis would be presenting her cross. He just happened to be visiting the site for the first time since the massacre.

“I just wanted to go where she died,” Basco said.