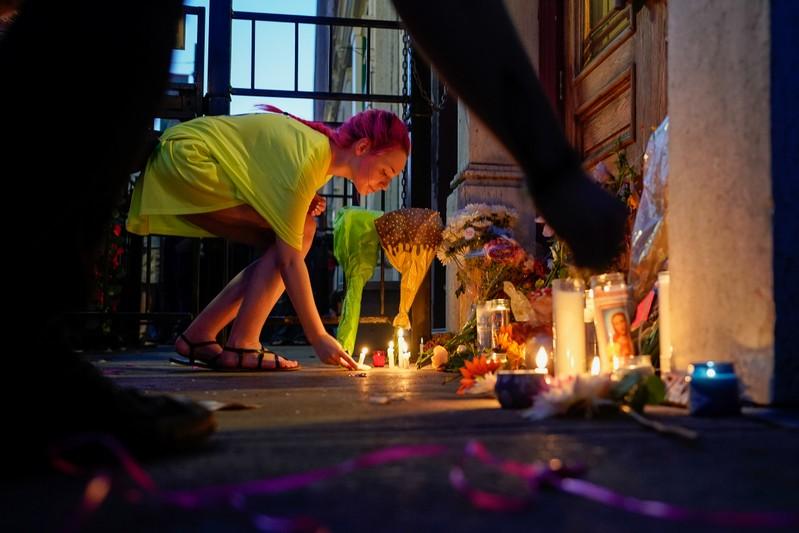 (Reuters) – The 24-year-old gunman who killed nine people in a rampage in Dayton, Ohio had a troubled past, including threatening fellow students in high school, authorities said, but police said it was too soon to establish a motive for the slaughter.

A mourner leaves a candle at the scene of a mass shooting in Dayton, Ohio, U.S. August 4, 2019. REUTERS/Bryan Woolston

The gunman, wielding an assault-style rifle and wearing body armor and a mask, inflicted carnage on a neighborhood known for its night life.

Police identified the shooter as Connor Betts, 24, of Bellbrook, Ohio, a Dayton suburb. He was the third young man to take a rifle and go on a public killing spree in the United States within a span of a week, unleashing fresh alarm at the national crisis of mass shootings.

The slaughter in Dayton began at around 1 a.m. on Sunday in the city’s Oregon District and ended very rapidly when police who were nearby moved in and shot him dead. Those killed included Betts’ sister, and least 27 people were wounded.

“We are very, very early in this investigation,” Dayton Police Chief Richard Biehl told a news conference on Sunday. “Any suggestion at this time of motive would be irresponsible.”

“We do not have sufficient information to answer the question everyone wants to know, ‘Why?’” Agents from the Federal Bureau of Investigation are helping police.

Betts had been troubled in high school, at one point drawing up a “hit list” of students he wanted to kill or otherwise harm, authorities said.

He also had a history of threatening women who spurned his advances, CNN reported. News media reported that at one point in high school he was taken off a school bus by police.

Apart from his high school troubles, Betts had been issued tickets for speeding and other minor traffic offenses, police said.

He had been studying psychology at a community college and working at a Chipotle restaurant. In an online profile, Betts reportedly described himself as “Good under pressure. Fast learner. Eager to overachieve.”

Nothing in Betts’ record precluded him from purchasing the assault-style weapon, which had been modified since it was sold, the police chief said.

The rifle was fitted with an extended drum magazine that could hold 100 rounds. The gun was bought legally online from a dealer in Texas and shipped to a local firearms dealer, police said.

Betts’ sister Megan Betts, 22, was one of the first to be killed. Biehl said the siblings had arrived in the same vehicle with a third person earlier in the evening but separated before the rampage.

The companion was wounded in the shooting, police said.

The shooting in Dayton, a riverfront city of about 140,000 people in southwestern Ohio, took place just 13 hours after a mass shooting at a Walmart store in El Paso, Texas, where 20 people were killed and 26 others wounded. The 21-year-old suspect in that shooting was arrested.

Responding to the attacks, U.S. President Donald Trump called on lawmakers to pass new background checks laws for buying guns, and suggested any such legislation might also include greater restrictions on immigration.

“We must have something good, if not GREAT, come out of these two tragic events!” he wrote on Twitter on Monday morning ahead of planned remarks on the subject.

Those killed in Dayton were four women and five men and ranged in age from 22 to 57, authorities said. Six of the nine were African-American.

“There isn’t much discrimination in the shooting,” Assistant Police Chief Matt Carper told reporters. “It happened in a very short period of time.”

One of those killed, Nicholas Cumer, was a week shy of completing his internship at Maple Tree Cancer Alliance, a non-profit patient care center in Dayton.

The center said in a statement it had offered Cumer a full-time job last week. “He loved his patients and served them well, with a loving and caring spirit,” the statement said. Two of his colleagues were also shot and expected to make a full recovery.

Lois Oglesby, a nursing student with a newborn child and a young daughter, was also killed, the Atlanta Journal-Constitution reported.

Biehl said Betts’ parents were having a tough time. “This is a nightmare for them and I think they are struggling as I think you can understand,” he said at the news conference.

Of the 27 people injured, four remained in serious condition and one person in critical, medical authorities said.

The Ohio shooting came seven days after a teenager killed three people with an assault rifle at a food festival in Northern California before taking his own life.