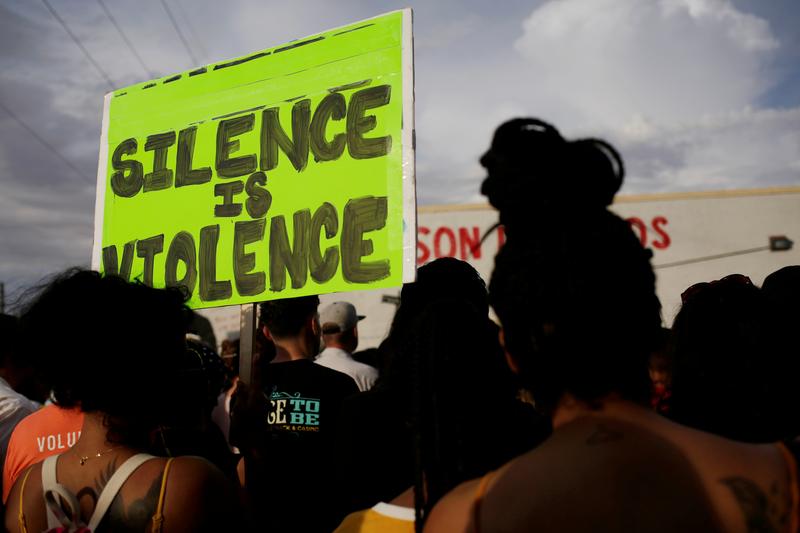 EL PASO, TEXAS (Reuters) – The artist had planned to unveil his mural on Sunday at a community event in El Paso, the latest of his works to celebrate the life of his murdered son.

The boy, fatally shot with 16 others in 2018 at a Parkland, Fla., high school, would have turned 19 on Sunday, artist Manuel Oliver said. Joaquin Oliver had been quietly devoted to the cause of immigrants, his father said, and the artist chose El Paso because he saw the border city as an immigration success story.

But the slaughter of 20 people at a Walmart store on Saturday just happened to intervene, turning the gathering at Las Americas Immigrant Advocacy Center on Sunday into yet another terrible vigil.

Oliver had been just across the U.S.-Mexico border in Ciudad Juarez, Mexico, the day before when a gunman – now believed to have written a manifesto condemning immigrants – opened fire at an El Paso Walmart.

“It didn’t surprise me and it cannot surprise anyone because we have done so little to stop this from happening,” said Oliver, who became an activist against gun violence after the mass shooting at Marjorie Stoneman Douglas High School.

Saturday’s massacre in El Paso has landed the mostly peaceful city of about 684,000 at the intersection of two of the nation’s most politically volatile issues: immigration and gun violence.

The city sits at the far western part of the state, just across the Rio Grande river from Ciudad Juarez, and is one of the busiest “ports of entry” into the United States from that country.

Though Juarez is known as a center of cartel- and smuggling-related violence, El Paso is rated on various websites as one of the safest cities in America and among the best places to retire or raise a family. According to KVIA here, a local ABC affiliate, it averages 16 murders a year.

At another vigil on Sunday, hundreds of El Paso community members mourned together at the County Sports Park. Among those they prayed for were Guillermo “Memo” Garcia, 35, and his wife, Jessica Coca Garcia, both injured Saturday as they were running a fundraiser for their daughter’s soccer team in front of the Walmart.

Adults and children sporting baseball and soccer uniforms from across the city lit candles at the baseball diamond where the American flag was flying at half staff.

Jessica Coca Garcia and fellow team mother Maribel Saenzpardo were both struck in the legs by bullets and remain in hospital, conscious and stable. Memo Garcia was still in an induced coma when other coaches visited Sunday afternoon, one of the visitors told Reuters.

“El Paso has historically been a very safe community,” Congresswoman Veronica Escobar, D-El Paso, told the Dallas Morning News after the shooting. “This is someone who came from outside our community to do us harm. A community that has shown nothing but generosity and kindness to the least among us. Those people arriving at America’s front door.”

But El Paso has for months been a flashpoint in the immigration debate as the 2020 presidential campaign has heated up, with some in President Donald Trump’s administration casting it as the embodiment of a border in crisis.

Opponents of Trump’s policies have decried conditions in crowded detention facilities in the area and also pointed to dangerous conditions in Ciudad Juarez, where thousands of aspiring immigrants have been sent to await outcomes of their U.S. court hearings.

El Paso has seen the largest jump in migrant apprehensions of any sector this fiscal year through June compared to last year during the same period. Particularly striking have been family apprehensions, which hit 117,612 this fiscal year through June, up from 6,326 in the same period in 2017, according to government statistics.

The city’s population is overwhelmingly Hispanic and by far most residents are American citizens, according to Data USA. El Paso also has strong cross-border ties. The mall at which the shooting occurred is often visited by residents of Juarez, although the flow of migrants has recently slowed.

El Paso’s relatively safe environment exists in a state that has not embraced gun control and in fact has recently relaxed some restrictions. This year, according to the Texas State Rifle Association, Governor Greg Abbott signed all 10 pieces of legislatihere passed by lawmakers that it had backed, including laws loosening rules in schools, businesses and places of worship.

In February, President Donald Trump took this hands-off message to a rally in El Paso:  “This is the state where a small band of patriots, at the Battle of Gonzales, armed with a single cannon, stared down a foreign, powerful army and declared, ‘Come and Take It,’” he told the crowd, according to Breitbart News.

Amid roaring applause, he repeated: “Come and Take It!”

The back-to-back shootings in El Paso and Dayton, Ohio, now only have deepened the national rifts on the issue of how to prevent gun violence. Texas Republican leaders on Sunday placed blame on white supremacism, poor mental health, video games and a lack of school prayer, among other things.

The unveiling-turned-vigil at the immigrant center featured a series of speakers including Democratic presidential candidate Beto O’Rourke, who is from El Paso and called earlier on Sunday for greater restrictions on gun sales. People lit candles for the dead and placed them at the foot of the mural, which Oliver just painted that day.

“El Paso no está solo,” or El Paso is not alone, read one message on the mural. “Las Americas son de todos,” or the Americas belong to everyone, said another. Oliver painted an image of his Joaquin and the boy’s mother, Patricia, with a fence between them, symbolizing the immigrant families who have been separated by border officers in the United States.

The magnitude of Saturday’s shooting, combined with the other recent massacres, will have a lasting impact on El Paso, said Javier Paz, 42, a high school history teacher and anti-gun violence activist who also dedicates time to helping immigrants through a Catholic charity. Paz said he has long avoided crossing the border into Juarez because of the violence there, but the El Paso shooting has given him the courage to volunteer south of the border as well.

“If anything, it empowers us all,” Paz said. “It’s empowered me. I’m not scared anymore.”