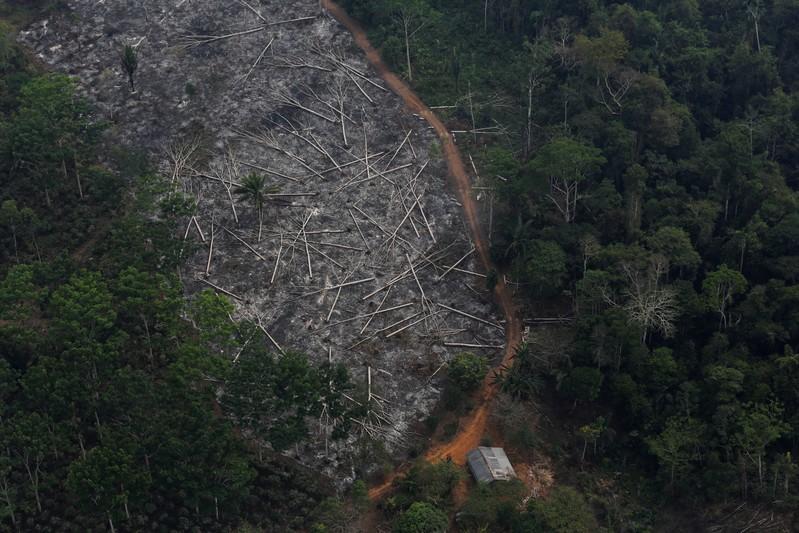 BRASILIA (Reuters) – Deforestation in Brazil’s rainforest has jumped around 67% in the first seven months of the year, according to preliminary data from Brazil’s space research agency, which the government has attacked as misleading and harmful to the national interest.

The monitoring system registered destruction of 2,255 square kilometers (557,223 acres) of Amazon forest in July, more than triple the 597 square kilometers spotted in July 2018, according to National Institute for Space Research (INPE). That is nearly the land mass of Luxembourg and the most monthly deforestation registered by INPE in years.

The Amazon is the world’s largest tropical rainforest, a bulwark against global warming often called the “lungs of the world” because of the vast amounts of carbon it soaks up. Brazil contains roughly 60% of the rainforest.

Environmentalists and researchers blame President Jair Bolsonaro’s rhetoric in favor of economic development in the Amazon for emboldening loggers, ranchers and informal miners since he assumed office in January.

Bolsonaro has vehemently criticized the data from INPE and fired the head of the agency on Friday over what he called “lies” that hurt the country’s trade talks.

“News like this that does not match the truth causes great damage to the image of Brazil,” Bolsonaro said in a press conference last week.

However, the space research agency, independent scientists and environmentalists have defended the data as accurate. Fired INPE director Ricardo Galvao told Reuters on Saturday that he continued to defend the figures as showing an “undeniable” spike in deforestation.

Due to cloud cover and other factors, deforestation registered in a certain month may have happened in a prior month, Environment Minister Ricardo Salles said last week. At a news conference with Bolsonaro, the minister suggested that discrepancies of that kind made it impossible to trust the data.

Salles said deforestation should only be measured with more exact annual figures, published in the so-called PRODES data series, instead of the rapid-response DETER data, which is updated almost daily.

Yet comparing longer periods of time – the first seven months of the year, for example – virtually eliminates concerns over when the deforestation actually took place, according to Tasso Azevedo, coordinator of geographic initiative MapBiomas.

MapBiomas is a collaboration between universities, non-profit groups and technology companies to monitor deforestation, drawing from several different sources including INPE data.

Tasso called the government criticism of the DETER data baseless, estimating its accuracy at more than 90%.

Sharp rises in the rapid-response data have consistently corresponded with an increase in the year-end figure, he added.

In fact, the annual PRODES figures have always shown even worse deforestation than detected by the faster DETER data over the past decade. (See graphic: tmsnrt.rs/2GMTzNc)

“Why does (Salles) spend so much time trying to say that the alerts happened earlier or later, when he could use the same time to take some action,” Azevedo said.