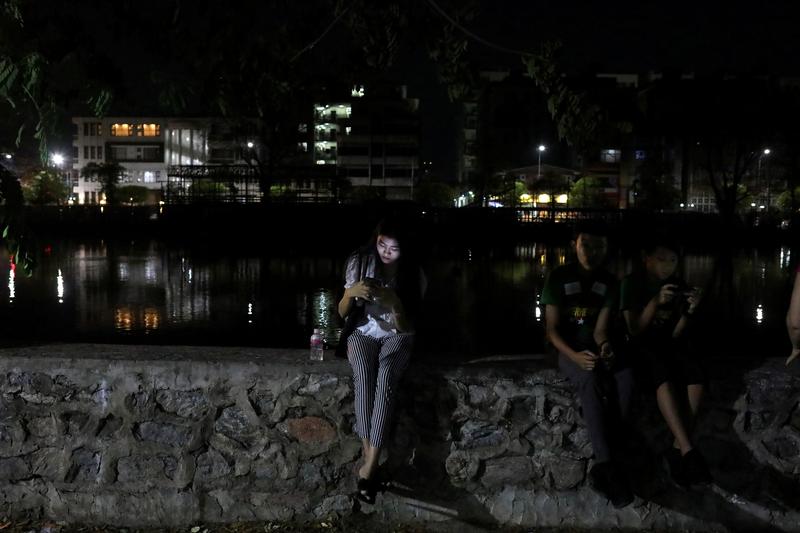 YANGON (Reuters) – Once a seat of kings, the city of Mandalay in northern Myanmar has seen turbulent chapters in its 162-year history – the fall of Burma’s last royal dynasty and decades of colonial rule. Now, officials are attempting to transform the former royal capital into Myanmar’s first “smart city”.

A woman looks at her phone at the city wall area of the Mandalay palace in Mandalay, Myanmar, March 30, 2019. REUTERS/Ann Wang

In a country where officials still largely labour with pen and ink, surrounded by stacks of mouldering papers, authorities in Mandalay are tapping social media and new technologies such as artificial intelligence software and drones to revamp a lethargic bureaucracy.

Under the secretive military junta that ruled Myanmar until 2011, people in the country’s second largest city rarely had any contact with those who governed them. Now, they talk to the mayor on Facebook and pay for services with QR codes, something not available in Myanmar’s commercial capital, Yangon. Authorities track garbage disposal with GPS and control traffic flows with remote sensors.

“It is very good that we can communicate with the mayor like this,” said 55-year-old taxi driver Kyi Thein. “Before, we could only see their motorcades.”

Formerly dominated by military-linked men and regarded as a hotbed of graft and mismanagement, the city’s first municipal government with an overwhelmingly civilian background has driven the plan, which is part of a regional initiative.

The pace of change has won plaudits in regional media and from overseas Myanmar nationals – the mayor was given the Citizen of Burma award by a U.S. diaspora organization in May – underscoring opportunities for Myanmar as the country emerges from half a century of isolation into a world dominated by rapidly evolving technology.

But some of the attempts to push through change have met with resistance, not only from corners of the creaky bureaucracy, but from activists concerned that smart technology, deployed without regulating legislation, could allow authorities to more closely surveil them.

In April 2018, Singapore, then the chair of the Association of South East Asian Nations, proposed the creation of a network of 26 “smart cities” that would harness technology to tackle some of the challenges created as the region’s once mostly rural population converges in cities.

Three Myanmar cities were chosen, but it is in Mandalay, in the centre of the country, where authorities have done most to embrace the proposal.

Locals there say issues are myriad. The tap water is not drinkable. Congestion is increasing as the number of vehicles has skyrocketed since the liberalization of imports in 2012. The roads are potholed and pavements littered with trash.

Many credit mayor Ye Lwin, a former eye surgeon turned politician and the first appointed to the post by a civilian government after elections in 2015, with overseeing a turnaround over the past two years. He responds to gripes on his Facebook page daily, tagging subordinates and issuing directives.

He declined an interview request by Reuters, referring questions to officials in his office.

“Our goal is to create a city which doesn’t damage the environment, is liveable for people, with a good economy and friendly environment,” said Ye Myat Thu, an IT expert who created Myanmar’s most popular Burmese-language font and now works alongside the mayor in the Mandalay City Development Committee. “We get there using technology.”

Although the Asian Development Bank gave money for an upgrade to the waste management system, most of the reforms have been funded by taxation, Ye Myat Thu said.

Authorities undertook a digital survey of the city, using 3D images shot by drones and data obtained by municipal officers roaming the city with GPS devices that they say has given them a better picture of the households and businesses that should be paying property tax.

The funds have paid for an Australian-made traffic control system and devices for staff to read electricity bills automatically by walking past houses rather than checking the meters.

But change has not come easy. “Only after I joined here, I realized how bureaucratic the system was,” said Ye Myat Thu.

For example, government departments across the country still eschew email for a paper-based letter system, he said, and Mandalay is no exception.

When authorities installed tracking on garbage trucks to make sure they were collecting the litter, drivers poured water on the devices in an effort to destroy them, Ye Myat Thu and another official said.

Recent weeks have brought a backlash against a proposed deal between Mandalay’s regional government and Chinese tech giant Huawei to provide CCTV cameras equipped with facial recognition technology and other security equipment as part of a “safe city” project worth $1.24 million, according to local media.

The United States has told its allies not to use Huawei’s technology because of fears it could be a vehicle for Chinese spying, an accusation the company has denied.

“Huawei supports privacy protection,” Bob Zhu, a spokesman for Huawei Myanmar, told Reuters in an email, adding that the deal in Mandalay had not yet been formally signed.

Nyi Kyaw, an activist from the Mandalay-based non-profit Metta, said authorities already kept a close eye on their activities and facial recognition could enable abuses.

“There is no trust between civil society organizations and the government. If this happens with the excuse of security, activists and political activists will be watched, rather than the criminals.”

Ye Myat Thu from MCDC said the country should have better “legal infrastructure” around personal data before the project could be implemented.

“We face many challenges,” Ye Myat Thu said, “We have been trying to change a system that has been going its own way.”