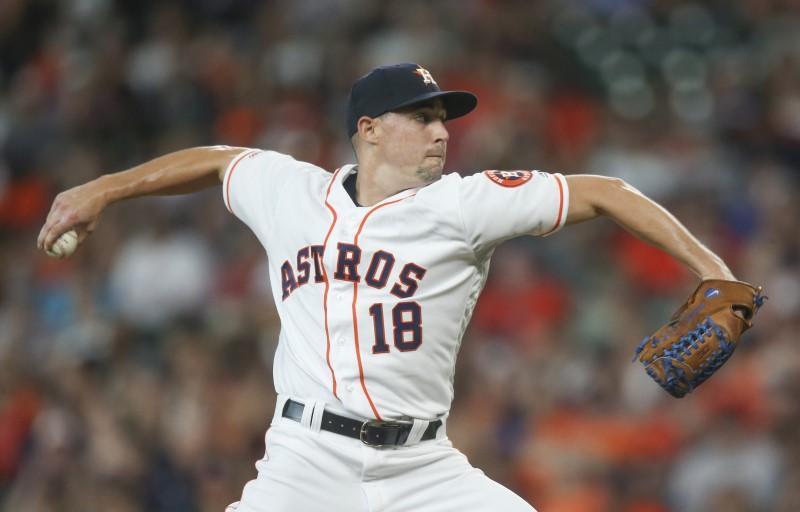 Four Houston Astros pitchers combined to no-hit the Seattle Mariners Saturday night in a 9-0 win in front of the home crowd, the second time the Mariners have been victims of a combined no-hitter this season.

Aaron Sanchez made his debut with the Astros a memorable affair, twirling six innings. Right-handers Will Harris, Joe Biagini and Chris Devenski each worked an inning to complete the no-hitter, the 12th in franchise history. Houston improved to 11-1 against Seattle this season.

Sanchez (4-14) was winless over his previous 17 starts with the Toronto Blue Jays, who shipped him to Houston along with Biagini on Wednesday at the trade deadline. Sanchez walked two and recorded six strikeouts for his first win since April 27 against Oakland.

DJ LeMahieu homered twice as New York battered Chris Sale again and cruised over visiting Boston in the opener of a day-night doubleheader.

It was LeMahieu’s third career multi-homer game and gave him a career-high 17 for the season. The Yankees beat Sale (5-11) for the fourth time this season, having scored 22 earned runs in 20 innings while hitting six homers off the left-hander.

New York’s Domingo German (14-2) won his fifth straight decision, allowing two runs on five hits in seven innings. He struck out seven and walked none and became the first Yankees starter to complete seven innings since CC Sabathia on July 6 against Tampa Bay.

In front of the largest paid crowd (48,101) of the season, the Yankees won their fourth straight and beat Boston for the 10th time in 14 meetings this season to move 13 1/5 games ahead of the third-place Red Sox in the AL East.

The Yankees swept Boston in a doubleheader for the first time since Aug. 18, 2006, at Fenway Park. The Red Sox are on their longest losing streak — seven consecutive games — since July 2015, and their 54th loss matches their total from last season.

Escobar hit a two-run home run in the first inning and crushed a three-run shot in the eighth off second baseman Brian Dozier, the second of two position players to pitch in the inning. Nick Ahmed and Jake Lamb also homered off Strasburg, who is 11-2 in his past 14 starts, with both losses coming to Arizona.

In his third game since being acquired from the Detroit Tigers, Nicholas Castellanos went 2-for-4 with a double and a run, and Javier Baez tripled and added an eighth-inning RBI single in the nine-hit effort by the Cubs.

Chicago’s All-Star catcher, Willson Contreras, left the game in the seventh inning after grabbing the back of his right leg while running up the line as he lined out to center. Manager Joe Maddon said Contreras suffered a right hamstring strain and will undergo an MRI exam on Monday.

Nelson Cruz had his second three-home run game in 10 days and drove in five runs, while C.J. Cron and Jorge Polanco also homered to power Minnesota over Kansas City in Minneapolis.

The 39-year-old Cruz, who also hit three homers in a 10-3 victory at Chicago on July 25, moved past Johnny Bench into a tie with Graig Nettles for 62nd on the all-time home run list with his 390th of his career in the sixth inning off reliever Jorge Lopez, his third of the game and 30th of the season.

The reigning American League Player of the Week now has 11 home runs and 23 RBIs in his last nine starts and has also homered in five consecutive games at Target Field. Minnesota extended its major league record with at least five home runs in a game to 10. The Twins lead the majors with 216 homers.

Mark Canha had a two-run single, while Marcus Semien and Chris Herrmann scored twice apiece for the A’s, who won their fifth straight against the Cardinals, including three in a row this season.

Pitching with a lead from the second inning on, Fiers (10-3) checked the Cardinals on six hits over 5 2/3 innings. He allowed one run and one walk, striking out four. The 34-year-old improved to 8-0 in his last 16 starts overall and 5-0 in his last nine home outings.

Ronald Acuna Jr. yanked a single down the left field line to produce his first career walk-off and give Atlanta the victory over visiting Cincinnati.

Acuna, who put the Braves ahead with a bases-loaded walk in the eighth inning, fell behind with two quick strikes against Reds reliever Robert Stephenson. After fouling off a pitch, Acuna slapped one past third baseman Eugenio Suarez to send Adam Duvall home with the winning run.

The Braves improved to 10-3 in extra-inning games and evened the season series with the Reds at 3-3. The Reds tied the game in the ninth against closer Shane Greene, who was making his Atlanta debut. It was Greene’s fourth blown save.

It was just the second time the Dodgers defeated the Padres in the last six times the teams have met. The Padres closed out the first half with a three-game winning streak at Dodger Stadium. The Padres are just 6-14 in the second half and have yet to win consecutive games since that run against the Dodgers.

Pablo Sandoval had three hits, Sam Coonrod (2-0) pitched one inning and Will Smith worked the ninth for his 27th save. Charlie Blackmon and Trevor Story homered, and Daniel Murphy had three hits for Colorado.

Colorado rallied to take the lead but lost it in the eighth inning. With one out, reliever Carlos Estevez (1-2) walked pinch hitter Joe Panik, then gave up a line single to Austin Slater. Posey came on to pinch hit and lined a double to right to drive in two and give the Giants a 6-5 lead.

Wilson Ramos hit a go-ahead homer in the eighth inning for two of his career-high six RBIs as visiting New York evened its series against Pittsburgh.

Ramos also had a three-run double and an RBI single, and Jeff McNeil hit a solo homer for New York. Marcus Stroman got a no-decision in his Mets debut. He gave up three runs and seven hits in 4 1/3 innings, with three strikeouts and two walks.

Starling Marte hit a two-run homer in the bottom of the ninth and had an RBI single for the Pirates. Pittsburgh starter Chris Archer missed in his 10th attempt at reaching four wins. He gave up one run and five hits in six innings, with six strikeouts and two walks.

Nick Pivetta pitched a perfect eighth before navigating trouble in the ninth, including shortstop Jean Segura’s throwing error to open the inning and Yolmer Sanchez’s RBI single later in the frame. Pivetta recovered to strike out pinch hitter Adam Engel with the tying run at third to notch his first career save.

Nola (10-2) capped his night with a swinging strikeout of pinch hitter Matt Skole with the potential tying run at third. Nola struck out 10 while scattering one run, three hits and two walks. Chicago limited the Phillies to four hits, but the early damage against White Sox lefty Ross Detwiler (1-2) proved to be enough.

Shortstop Willy Adames homered in the eighth inning, snapping a 6-6 tie. It was his 14th homer of the season, and it broke a 20-inning scoreless streak by Marlins reliever Jarlin Garcia (2-1). Sogard, acquired from the Toronto Blue Jays on Sunday, has 12 homers this season — two of them with the Rays.

Austin Meadows also homered for Tampa Bay. It was the third straight game in which he went deep.

Orange County native Adam Plutko (4-2) tossed 5 1/3 strong innings against his favorite childhood team for the Indians, who have won 15 of their last 20 games overall and 14 of their last 15 home contests versus Los Angeles.

Justin Upton had an RBI single and drove in two runs for the Angels, who have lost seven of their last nine games. Los Angeles starter Felix Pena was carried off the field with a right knee sprain in the second inning after coming down awkwardly on first base while reeling in a high underhand toss from Albert Pujols.

Rougned Odor blasted a two-out homer to center in the 10th inning to give host Texas the win over Detroit in Arlington, Texas.

Odor’s 20th homer of the season came off Nick Ramirez (5-4). Willie Calhoun hit his eighth homer, while Delino DeShields and Jose Trevino each scored and drove in a run for Texas. The Rangers have won the first two games of the three-game series by identical 5-4 scores.

Reliever Mychal Givens (2-5) struck out three and allowed one hit in 1 1/3 innings to earn the win. Paul Fry pitched around a single in the ninth to pick up his third save.

Buddy Boshers (0-1) allowed two runs in the seventh to take the loss for the Blue Jays, whose five-game win streak ended. Freddy Galvis and Reese McGuire homered for Toronto.