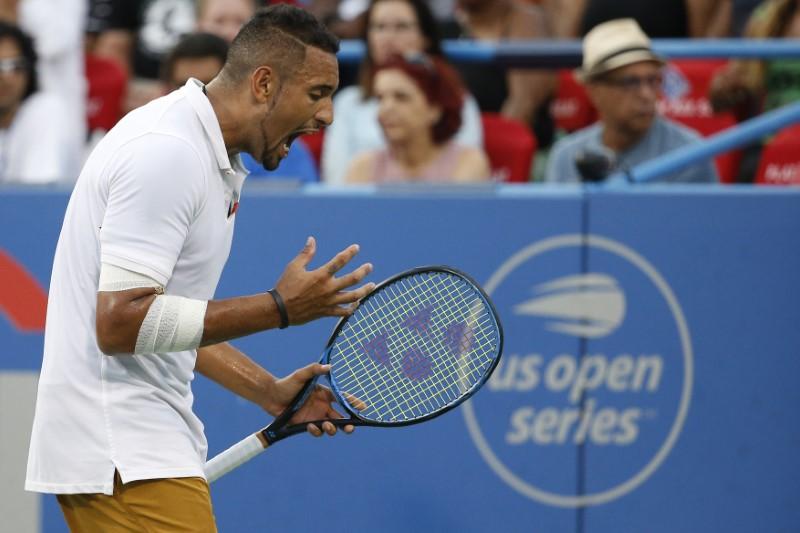 Aug 3, 2019; Washington, D.C., USA; Nick Kyrgios of Australia yells on the court against Stefanos Tsitsipas of Greece (not pictured) during a changeover in a men’s singles semifinal of the 2019 Citi Open at William H.G. FitzGerald Tennis Center. Mandatory Credit: Geoff Burke-USA TODAY Sports

(Reuters) – The first career meeting between Nick Kyrgios and Stefanos Tsitsipas lived up to the hype on Saturday as the Australian saved a match point on his way to a 6-4 3-6 7-6(7) victory over his Greek doubles partner and a place in the Citi Open final.

The mercurial Kyrgios put on a show for the sell-out crowd in Washington, fist bumping with fans mid-match and working in several tweeners, an ill-advised underhanded serve and some slick no-look volleys in a wildly entertaining victory.

For the second night in a row, Kyrgios consulted a fan prior to his serve on match point with the spectator apparently advising him to aim for the top seed’s backhand.

Kyrgios did just that and Tsitsipas could only block the rocket of a serve back, setting up an easy forehand winner that ended the match on a hot and humid night in the U.S. capital.

The world number 52 will be looking for his sixth career title when he faces either third-seeded Russian Daniil Medvedev or lucky loser Peter Gojowczyk in the final.