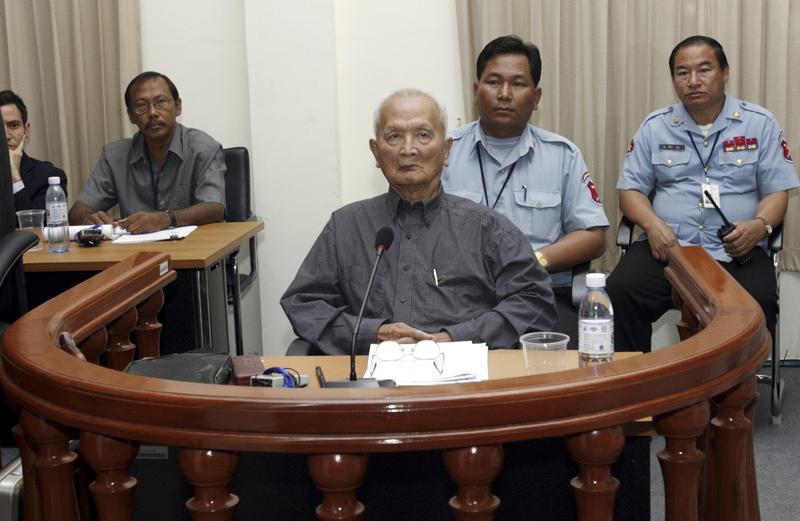 PHNOM PENH (Reuters) – Nuon Chea, the chief ideologist and ‘Brother Number Two’ of Cambodia’s Khmer Rouge, whose brutal rule in the 1970s led to the deaths of some 2 million people, died on Sunday at the age of 93, a court spokesman said.

FILE PHOTO: Nuon Chea, Pol Pot’s right hand man of the Khmer Rouge regime,sits in the dock during his first public appearance at the Extraordinary Chambers in the Courts of Cambodia (ECCC) on the outskirts of Phnom Penh February 4, 2008. Noun Chea stood before the U.N.-backed “Killing Fields” tribunal on Monday in the second public appearance by a senior Pol Pot cadre. REUTERS/Chor Sokunthea (CAMBODIA)

A U.N.-backed court found Chea guilty of genocide and sentenced him to life in prison last year, almost four decades after the Maoist regime which oversaw Cambodia’s “Killing Fields” was overthrown.

Chea was among a small clique — led by ‘Brother Number One’, Pol Pot — of mostly French-educated communists who rose to lead a bloody revolution against a U.S.-backed government after their country was engulfed by the Vietnam War.

The extremist ideology of the 1975-79 regime sought to turn Cambodia back to “year zero” in its quest for a peasant utopia.

Between 1.7 and 2.2 million people, almost a quarter of the Southeast Asian country’s population, died during its four year rule, of starvation, torture, exhaustion or disease in labor camps, or bludgeoned to death during mass executions.

“We can confirm that defendant Nuon Chea, 93, passed away this evening on 4 August 2019 at Khmer Soviet Friendship hospital,” Neth Pheaktra, spokesman at the Extraordinary Chambers in the Courts of Cambodia (ECCC), said.

“Nuon Chea’s family has been informed.”

Of the Khmer Rouge’s leaders only former President Khieu Samphan and Kaing Guek Eav, also known as Comrade Duch, are serving life sentences after being convicted of genocide and crimes against humanity.

Khieu Samphan and Nuon Chea were found guilty of crimes against humanity in the first phase of the complex U.N. trial and sentenced to life in prison in 2014. A separate trial last year found Chea guilty of genocide.

In opening remarks at his 2011 trial, Chea denied the genocide charges against him.

“My position in the revolution was to serve the interests of the nation and people,” he said.

“Oppression, injustice compelled me to devote myself to fight for my country. I had to leave my family behind to liberate my motherland from colonialism and aggression, and oppression by the thieves who wished to steal our land and wipe Cambodia off the face of the earth,” Chea told the court.

Unlike others in Pol Pot’s inner circle, Nuon Chea did not study in Paris, and instead read law at Bangkok’s prestigious Thammasat University, where he became a member of the Thai Communist Party.

He was appointed Deputy Secretary of the Communist Party of Kampuchea, the name the Khmer Rouge used for Cambodia, in 1960, a position that put him in charge of party and state security and Phnom Penh’s notorious S-21 interrogation and torture center at the capital’s Tuol Sleng high school.

Those carrying out the brutal beatings at S-21 were instructed to “smash to bits” traitors and counter-revolutionaries.

Under the chaotic Khmer Rouge ideology, furthered by Chea, that could mean anyone from school teachers to children, to pregnant women and to “intellectuals” identified as such if they were wearing spectacles.

Court spokesman Pheaktra did not say how Chea died, but added that he had been in hospital since early July.

Youk Chhang, director of Documentation Center of Cambodia, an organization which provided thousands of documents as evidence to the U.N.-backed court which prosecuted the Khmer Rouge, said Nuon Chea had escaped his life sentence by dying.

“He was born just like the rest of us, but became driven by power and prejudice against his own people,” Youk said.

“He can escape justice from the court of law but he can’t escape his punishment from God.”