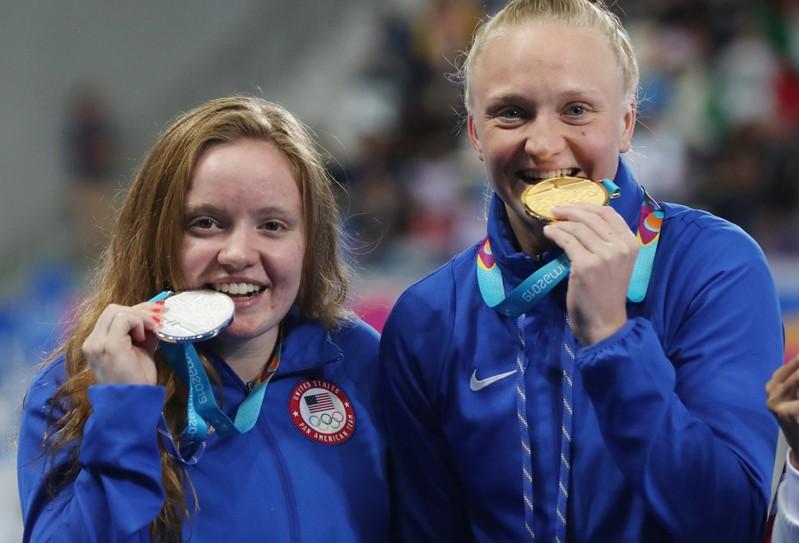 LIMA (Reuters) – The United States needed only one week to hit the medal century mark at the Pan Am Games on Friday while Canada shot up the table into second place after sweeping all the titles but one on offer in badminton.

It was also another big evening in the boxing ring for Cuba, who picked up four more golds after winning four from five finals on Thursday.

Despite those big days, no nation was able to keep pace with the United States, who smashed through the century mark and reached 101 total medals.

Not yet halfway through the Games schedule, the U.S. have flexed their muscles to snatch 41 golds and leave the rest of the pack in their dust with Canada a distant second on 16 golds and 63 total medals.

Canada enjoyed their biggest single gold medal haul of the Games so far with their badminton team claiming four golds and three silvers from five finals.

It was an historic first for the 22-year-old kid from the favelas of Rio de Janeiro as Coelho became the first Brazilian to win gold in the men’s singles competition.

Canada’s Michelle Li took the women’s singles crown for the third straight Games, while Rachel Honderich and Kristen Tsai teamed up to win the women’s doubles.

As dominant as Canada was on the badminton court, Cuba matched that and more in the boxing ring.

Of the 14 gold medals Cuba has accumulated, more than half of them have come from their boxers.

Kim Rhode, a three-time Olympic champion, claimed gold for the fifth time from six Pan Am Games in the women’s skeet shooting.

The U.S. has dominated on the shooting range and Lucas Kozeniesky added to the U.S. haul with a victory in the men’s 10 meter air rifle.

With one day remaining in the shooting events, the U.S. has won 17 medals including eight golds. The only other country to reach the top of the podium has been Cuba.

The U.S. began another gold medal run early in the day with Connor Baxter winning the men’s stand-up paddle, one of newest events on the Pan Am Games roster, while the women’s event went to Brazil’s Lena Guimaraes.

While surfing will make its Olympic debut next year at the Tokyo Summer Games, stand-up paddle (SUP) is yet to get on the program.

Baxter believes the evidence was there on Friday that it should one day be in the biggest sports event of them all.

“The dream is now to see SUP as an Olympic event,” said Baxter. “We have showcased the sport here so well.

“We’ve proved that we can go out in any kind of conditions and catch the waves just like the surfers.

“To see us in the Olympics in 2024 in Paris, if it was possible would be fantastic.”