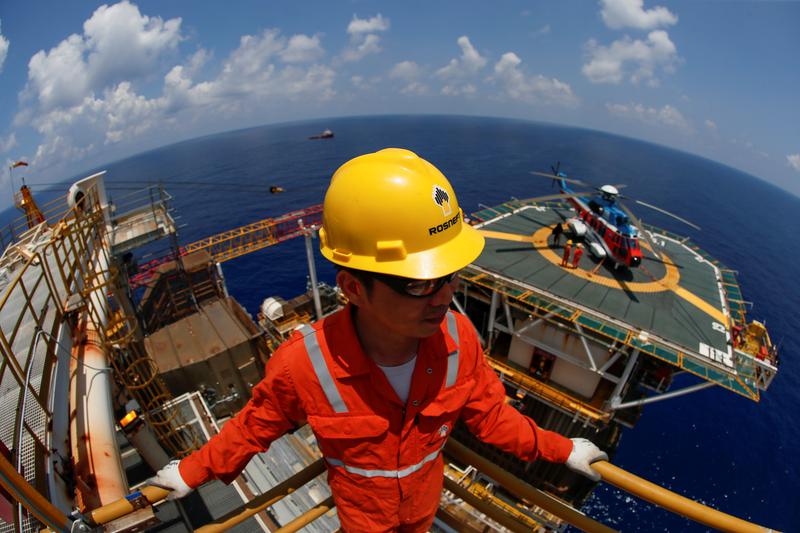 FILE PHOTO: A Rosneft Vietnam employee looks on at the Lan Tay gas platform in the South China Sea off the coast of Vung Tau, Vietnam April 29, 2018. REUTERS/Maxim Shemetov/File Photo

Chinese maneuvering in energy-rich stretches of the South China Sea, including a standoff in Vietnam’s Exclusive Economic Zone, will figure on Friday when top diplomats of Southeast Asian bloc ASEAN attend a security gathering with world powers.

Among those is a United States that has laid out an “Indo-Pacific Strategy” challenging Chinese maritime hegemony and seeking stronger ties with nations pushing back against Beijing.

Vietnam has done just that, demanding earlier this month that China remove a survey ship and escorts from its waters near an offshore oil block.

Within hours, the U.S. State Department rebuked China for “bullying behavior” and “provocative and destabilizing activity”.

“The U.S. role is undeniable and very important and they need to put more pressure on China,” said Hai Hong Nguyen, a research fellow at Queensland University of Technology in Australia.

Vietnam’s call to rally the international community was a departure from its usual cautious responses to China, which seeks to settle rows bilaterally.

Vietnam also appears to have tacit support from Russia, whose state oil firm Rosneft (ROSN.MM), is operating an oil block within what China says is its historic jurisdiction.

Russia will be among the 27 countries at Friday’s ASEAN Regional Forum meeting in Bangkok.

Also present will be foreign ministers of Japan, the United States, China and Australia, plus those of the Philippines, Malaysia and Vietnam, which have recently been impacted by Chinese vessels, including the coastguard and a fishing militia.

The same Chinese Haijing 35111 coast guard ship that showed up near Rosneft’s operation off Vietnam was also tracked near an oil rig on Malaysia’s continental shelf during May, according to the AMTI thinktank.

Meanwhile in June, a Chinese fishing boat sank a Filipino vessel, leaving 22 crew stranded near the Reed Bank, the site of gas deposits inside the Philippine EEZ. China said it was an accident.

According to South China Sea expert Carl Thayer, the recent increase in Chinese assertiveness is no coincidence, but a response to the U.S. Indo-Pacific Strategy, and an increase in flyovers by U.S. bombers and U.S. navy patrols in the South China Sea, through which $3.4 trillion of goods pass annually.

“China’s use of gray zone tactics will inevitably cause regional states to take countermeasures and push back,” he wrote. “This carries the risk that confrontations at sea will escalate.”

Defending Beijing’s position, China’s ambassador to the Philippines, Zhao Jianhua, said on Tuesday that China was committed to international law and “working very hard” with ASEAN to create a maritime code of conduct within three years.

“No matter how strong China may become, China will never seek hegemony or never establish spheres of influence,” he said.

China’s one key ally is Philippine President Rodrigo Duterte, who despises the United States, and whose foreign policy was praised by China’s Global Times newspaper last week as “peaceful, cooperative and restrained”.

According to Manila-based author and analyst Richard Heydarian, Duterte is increasingly isolated in defending China.

“From the very front lines, Hong Kong and Taiwan all the way to the Philippines, Malaysia, Indonesia and definitely Vietnam – you’re seeing a robust pushback by a lot of smaller countries,” he said.

“Definitely, Washington has that strategic room for maneuver,” he said.

Additional reporting by Khanh Vu in HANOI and Matthew Tostevin in BANGKOK; Editing by Michael Perry