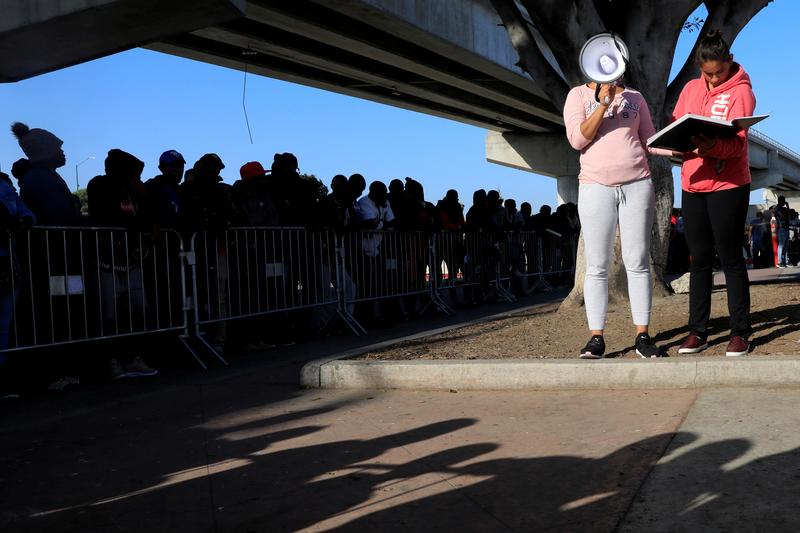 FILE PHOTO: A volunteer shouts numbers on the list for Migrants waiting to apply for asylum in the United States outside the El Chaparral border in Tijuana, Mexico July 24, 2019. REUTERS/Carlos Jasso/File Photo

(Reuters) – A U.S. federal judge on Friday struck down one of President Donald Trump’s initiatives to curtail asylum claims, ruling that the government could not reject migrants who had crossed the border illegally.

A different federal judge had already put a temporary block on the policy, which would have rejected asylum claims from people who entered the United States between legal ports of entry. The ruling on Friday by U.S. District Judge Randolph Moss in Washington, D.C. went further by finding the Trump rule violated immigration law.

The Trump administration issued the rule in November 2018 as part of a series of policies aimed at reducing legal and illegal immigration, a touchstone issue that helped Trump get elected in 2016 and is already part of the 2020 campaign.

As with many of the Trump efforts, the rule ran into a number of legal challenges. In the Washington case, 19 asylum-seekers from Nicaragua, Honduras, El Salvador and Guatemala challenged the rule on several grounds, including that it violated U.S. law that allows migrants to apply for asylum regardless of whether they entered legally.

Immigrant rights advocates celebrated the decision, calling it a resounding defeat for the Trump administration that will save lives.

“This decision is significant not only for the bona fide refugees who would have otherwise been denied the right to seek asylum under the illegal rule, but it gives us hope that future attacks on asylum-seekers will meet the same fate,” Keren Zwick of the National Immigrant Justice Center said in a statement.

The U.S. Justice Department did not immediately respond to a request for comment.

The Trump administration has taken a number of measures to curtail asylum seekers, saying a majority of claims are fraudulent.

Last month a federal judge in San Francisco blocked the Trump administration from enforcing a new rule that would require asylum seekers to first pursue safe haven in a third country they had traveled through on their way to the United States.