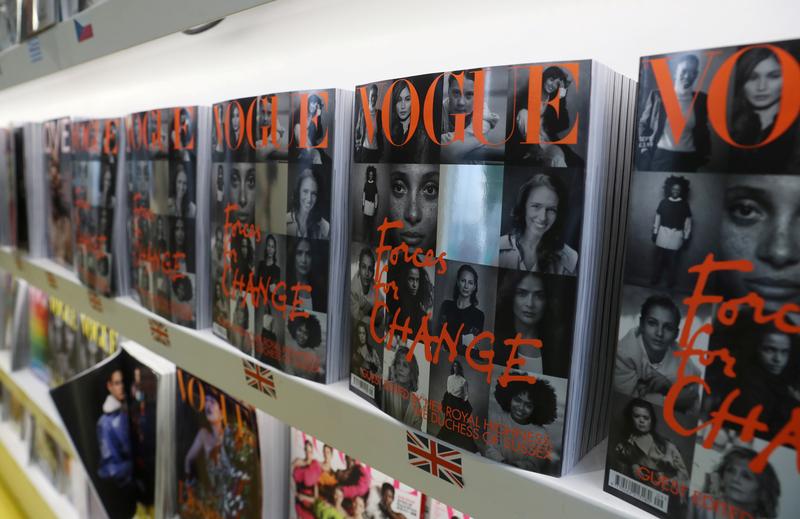 Copies of the September issue of British Vogue are displayed for sale in London, Britain August 2, 2019. REUTERS/Simon Dawson

LONDON (Reuters) – Royal-loving readers queued up on Friday to buy the new edition of the British Vogue magazine which was guest edited by Meghan, the Duchess of Sussex and wife of Britain’s Prince Harry.

Meghan, who gave birth to her first child in May, spent seven months working with the magazine’s editor-in-chief Edward Enninful for the September issue which featured 15 women she considered “Forces for Change” on the cover.

“I wanted to be one of the first … and I was very excited,” said Vanessa Forstner, 29, a luxury car saleswoman who queued up outside the Conde Nast Worldwide News store in central London.

Sandria Plummer, 55, another of those who waited to buy the magazine, said she was excited about the diverse contents Meghan had chosen.

“It’s special because the Duchess of Sussex is the editor for this month and … it’s a once in a lifetime thing to have, it’s a collectors’ item so I’m excited that I’ve got two copies now,” she said.

Former actress Meghan, 37, said in a statement she had sought to steer the focus of the September issue – usually the year’s most read – to “the values, causes and people making impact in the world today”.

“I hope readers feel as inspired as I do, by the ‘Forces for Change’ they’ll find within these pages,” Meghan said.

The issue features a “candid conversation” between Meghan and former U.S. first lady Michelle Obama and an interview by her husband Harry with veteran primatologist Jane Goodall in which he discusses the “unconscious bias” of racism.