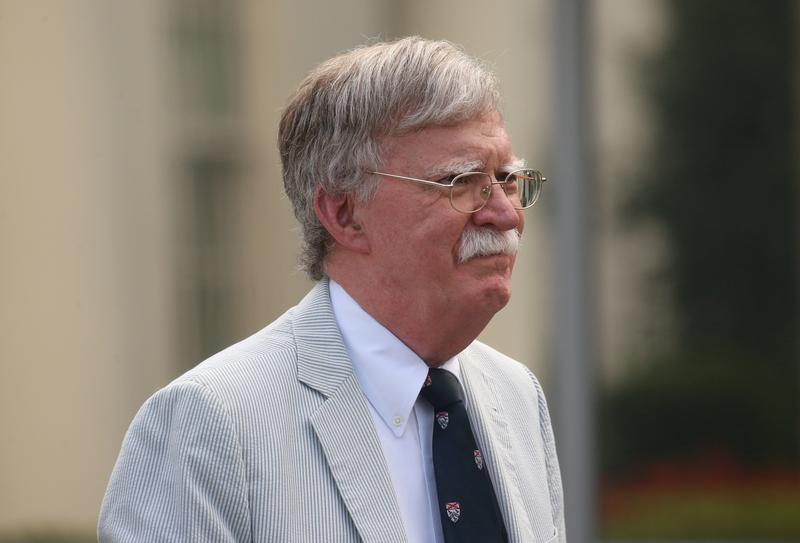 U.S. National Security Adviser John Bolton walks to give an interview to Fox News outside of the White House in Washington, U.S. July 31, 2019. REUTERS/Leah Millis

“I think the idea here is we are watching those nuclear activities very, very closely,” Bolton said in an interview on Fox Business Network. “So this is a short 90-day extension,” he said.

Trump last year abandoned the nuclear agreement, arguing that he wanted a bigger deal that not only limited Iran’s atomic work, but also reined in its support for proxies in Syria, Iraq, Yemen and Lebanon, and curbed its ballistic missile program.

Trump also tightened sanctions on Iran in May to try to choke off its oil exports.

Fears of a direct U.S.-Iranian conflict have risen since May with several attacks on oil tankers in the Gulf, Iran’s downing of a U.S. surveillance drone, and a plan for U.S. air strikes on Iran last month that Trump called off at the last minute.

Wendy Sherman, who served as undersecretary of state under former President Barack Obama and was the lead U.S. negotiator for the Iran nuclear agreement, linked the action against Zarif to the sanctions waivers.

“For a president who says he is ready to talk with Iran without preconditions, sanctioning the foreign minister of Iran clearly undermines that objective and risks dangerous escalation instead,” said Sherman, who is director of the Center for Public Leadership at the Harvard Kennedy School.

“One assumes sanctioning Zarif is the price for those waivers. The internal administration battle of war or diplomacy apparently wages on,” she said.

The Washington Post reported on Tuesday that Trump, in an Oval Office meeting last week, sided with Treasury Secretary Steven Mnuchin who argued for renewing the waivers over the objections of Pompeo and Bolton.

The report said Mnuchin argued that if the waivers were not renewed, “the United States would have to sanction Russian, Chinese and European firms that are involved in projects inside Iran that were established as part of the 2015 nuclear deal.”

The Treasury Department asked for more time to consider the effects of such sanctions, the Post reported.