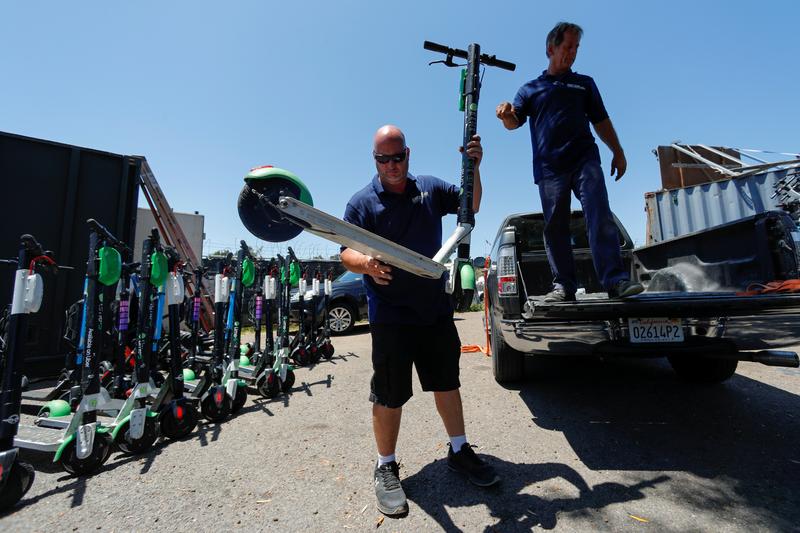 SAN DIEGO, (Reuters) – Two men in San Diego have impounded thousands of electric scooters they say have been left littered about the city and endangering pedestrians, sparking a battle with companies that have flooded cities with the two-wheelers.

John Heinkel, 55, and Dan Borelli, 43, operate a small outfit called ScootScoop. They use a flatbed truck to tow away scooters they say have been left improperly around hotels or other private properties.

In just over a year of operations, they have impounded more than 12,500 electric scooters, Borelli said. The electric scooter companies Bird and Lime have responded by suing them in California state court and accused them of unlawfully taking their vehicles.

The battle between the men and the scooter companies underscores the chaotic legal landscape for the vehicles, which are the same size as toy scooters that many people rode as children but are powered by an electric motor.

Cities in the United States and Europe have struggled with how to regulate the scooters, amid complaints from some residents and businesses that they clutter sidewalks when parked and endanger pedestrians when driven.

A dozen electric scooter companies have received more than $1.5 billion in investments in total, according to a report issued earlier this year by Boston Consulting Group.

Borelli describes ScootScoop as a start up in its own right, with he and Heinkel the only full-time employees. Like many start-ups, ScootScoop is not yet profitable.

Most of the scooters the firm has impounded in San Diego are from Bird and Lime, but those companies are refusing to pay to retrieve their vehicles and are fighting ScootScoop in court through their lawsuits, Borelli said.

Bird in a statement said ScootScoop was “unlawfully impounding micro-mobility devices and demanding a ransom for their return.”

“We are seeking an immediate end to their scheme as the company is robbing people of the environmentally friendly scooter options they’ve come to rely upon each day to get to and from work, as well as to local businesses,” the company said.

Lime in a statement said ScootScoop has repeatedly taken scooters that are “responsibly parked.”

“Their attempts to deputize themselves as an extension of the city is not only unlawful, but it is nothing more than a property theft scheme to generate income,” Lime said.

ScootScoop claims the right to impound scooters under California law when they are improperly parked on private property, and it invoices the scooter companies at least $50 per vehicle to return them, Borelli said. ScootScoop plans to auction off some scooters if it doesn’t get paid.

With Bird and Lime refusing to pay, the scooters sit in ScootScoop’s compound, but not silently. As ScootScoop’s truck drove away with a load of them last week they emitted a chorus of chirping sounds designed to scare off potential thieves.

San Diego city leaders earlier this year approved regulations for electric scooters that require companies to obtain permits and comply with new rules, such as ensuring that in the downtown area the scooters are only parked in certain designated “corrals.”

Borelli and Heinkel said they are not personally opposed to scooters in San Diego, California’s second-largest city.