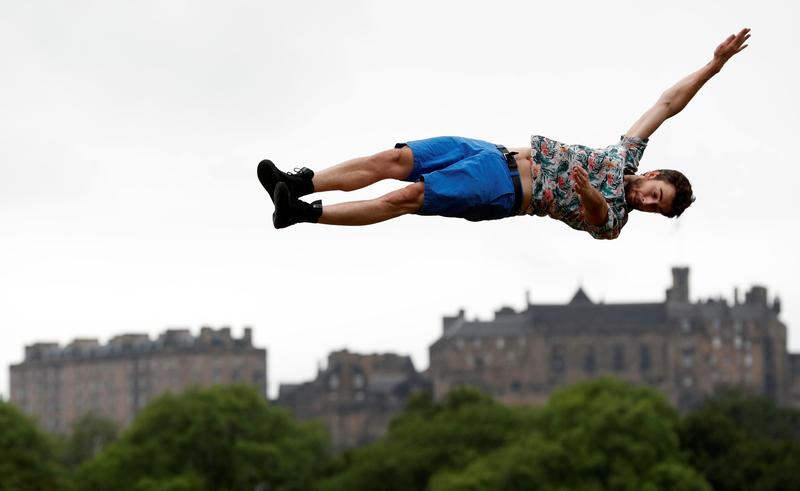 LONDON (Reuters) – The world’s biggest celebration of the performing arts begins on Friday in Edinburgh, with its most international line-up yet grappling with issues every bit as weighty as those that set the tone for the city’s first festival in 1947.

Jarno Polhuijs, a member of the cast of Super Sunday, is airborne above Edinburgh Castle, Edinburgh, Britain August 1, 2019. REUTERS/Russell Cheyne

Then, the scars of World War II were still healing. Now the globe faces grave new threats in the form of climate change and a divisive wave of political populism.

Scottish comic and fringe performer Mark Nelson is tackling Britain’s experience of polarized views in “Brexit Wounds”, his take on the island’s chaotic departure from the European Union.

As a subject for comedy he considers Boris Johnson too good to be true, labeling Britain’s Prime Minister – along with U.S. President Donald Trump – as “almost beyond satire.”

“They make so many gaffes themselves, anything they do is almost funnier than anything you can come up with,” he said.

Nelson’s solution so far has been to let his daughter Isla deliver the killer lines in “News at Three,” a reference to the age she made her debut. It’s an online sensation, scoring more than 140 million views to date.

Now six, Isla has “retired” to go to school. Of Johnson, she said: “He couldn’t do one of my jigsaws”.

While the festival’s aim to boost morale through culture has been a constant, its structure has radically changed over the decades.

In 1947 only eight theater groups turned up uninvited, beginning the original fringe.

Now fringe shows numerically dwarf the official festival and comedy is the biggest category, accounting for 37% of well over 3,000 shows. Theater is second at 27%.

As British comics tour the globe and stand-ups from far-flung places head to Edinburgh, the appeal is truly international, with the rise of women comics helping to generate a more personal humor.

British opera singer-turned-cabaret-artist Melinda Hughes in “Off the Scale” also sends up politics, as well as fretting about climate change and exploring the deeply painful.

After her mother’s death this year, she finds catharsis in a song inspired by a difficult decision to block her mother from her Twitter feed because she considered her views unpalatable.

Another artist who stretches the boundaries of when we’re allowed to laugh is Daniel Sloss.

Brought up in nearby Fife, he has shot to fame with Netflix shows streamed in 190 countries.

Jarno Polhuijs, a member of the cast of Super Sunday, is airborne above Edinburgh Castle, Edinburgh, Britain August 1, 2019. REUTERS/Russell Cheyne

He takes responsibility, he says, for 110 divorces and 40,000 break-ups because of a sketch that’s high-risk for anyone in a fragile relationship.

Finding laughter in dark places is a skill Sloss developed as a child after the death of his younger sister.

“It was when I realized how important laughter was,” he said.