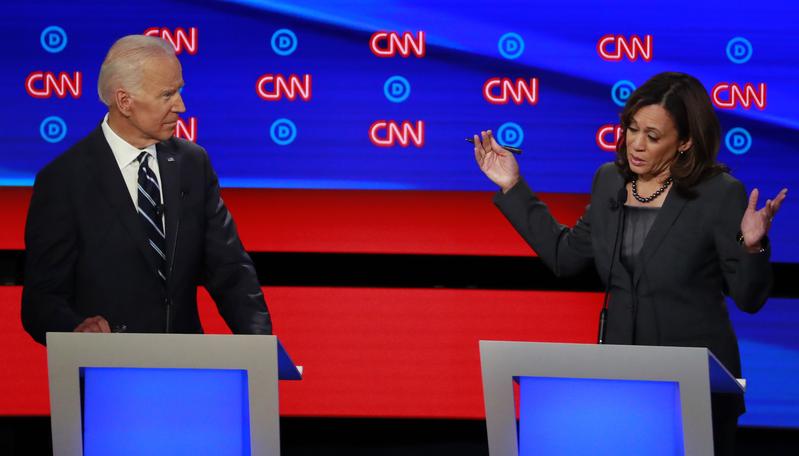 DETROIT (Reuters) – Democratic front-runner Joe Biden and Senator Kamala Harris clashed again in the first moments of the second presidential debate on Wednesday, but this time it was about healthcare and not race.

In the first round of debates in Miami last month, Harris scored points by criticizing the former vice president’s record on racial justice as a U.S. senator in the 1970s and 1980s.

“Go easy on me, kid,” Biden told Harris as they greeted each other on stage before Wednesday’s debate began in Detroit.

But neither one had any plans to go easy, and they quickly got into a detailed argument about Harris’ “Medicare for all” healthcare plan.

Here are some early highlights from the debate.

The first question went to Harris, who was asked to respond to the Biden campaign’s characterization of her recently released healthcare plan as a “have-it-every-which-way approach.”

“They are probably confused because they have never read it,” the senator from California responded.

She said her plan is a response to listening to voters, who want public and private options for now, with 10-year phase-in period to transition to a Medicare-for-all system, as opposed to a four-year phase-in period offered by progressive U.S. Senator Bernie Sanders of Vermont, who took part in Tuesday night’s debate.

Biden said Harris did not fully explain how she would pay for her plan. Harris countered that Biden’s plan would leave 10 million people uninsured and called it the “status quo.”

The question led to some of the most clearly articulated positions on expanding access to health insurance the candidates have offered to date.

Senator Kirsten Gillibrand of New York, another of the 10 candidates on stage on Wednesday, said Democrats need to remember that Republicans are chipping away at the Affordable Care Act enacted by former President Barack Obama and that Democratic candidates are at “risk of losing the forest for the trees.”

“This pitting against progressives, against moderates, saying one is realistic and the other doesn’t care enough – that to me is dividing or party and demoralizing us in the face of the real enemy here,” Booker said. [nL2N24W03R]