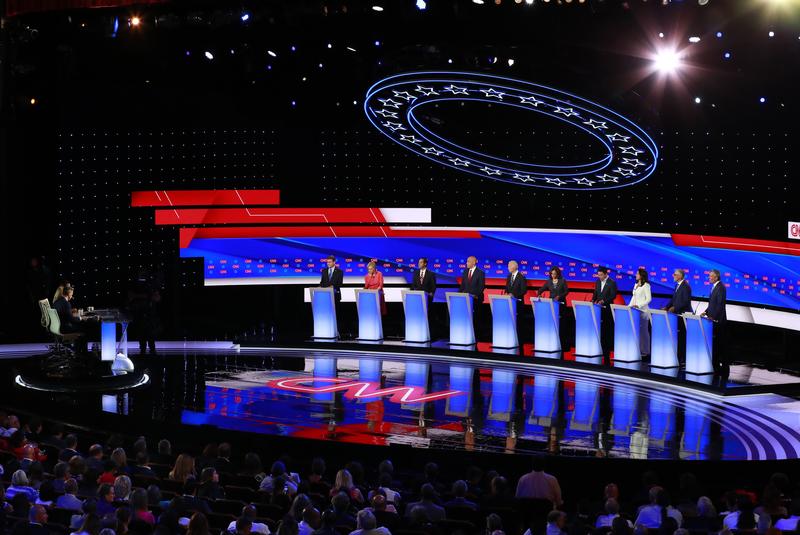 DETROIT (Reuters) – Democratic presidential front-runner Joe Biden survived another debate night of sustained criticism, while many of his rivals for the Democratic Party’s 2020 presidential nomination leave Detroit hoping they did enough to keep their bids alive.

This week’s back-to-back debates gave 20 contenders in the field vying for the party’s nomination to challenge Republican President Donald Trump next year a chance to make their cases to a national audience and assert distinctions on policy and style.

U.S. Senators Elizabeth Warren and Bernie Sanders teamed up on Tuesday night to defend their shared policy positions against attacks by their more moderate opponents, while Biden and rival Kamala Harris came under fire on Wednesday for their records.

The coming weeks will bring another challenge. The party’s next debate is not until September, and the majority of candidates are struggling to raise enough money or gain enough traction in the polls to make the cut for that event.

Candidates, including U.S. Senator Kirsten Gillibrand and former Colorado Governor John Hickenlooper, have so far failed to meet the criteria, putting pressure on their campaigns to change course or risk being relegated to obscurity.

Gillibrand was direct about her struggle, asking viewers on Wednesday night to donate to her campaign “so I can make the next debate stage.”

For the front-runners, the second round of debate resulted in few pitfalls.

Biden, the former vice president, appeared to recover after his performance in the first debate in Miami in June was criticized for lacking the forcefulness critics say the eventual nominee will need to take on Trump in the November 2020 election.

Harris, the U.S. senator from California, who put on the blockbuster performance of the first debate, struggled in the second round to fend off repeated attacks on her healthcare plan and criminal justice record.

Candidates on both nights appeared eager to tussle on the debate stage, while uniting around their determination to defeat Trump.

The six-week break in debates could give Democrats a chance to re-evaluate their individual strategies and consider whether it would be better long-term to spend more time going after Trump.