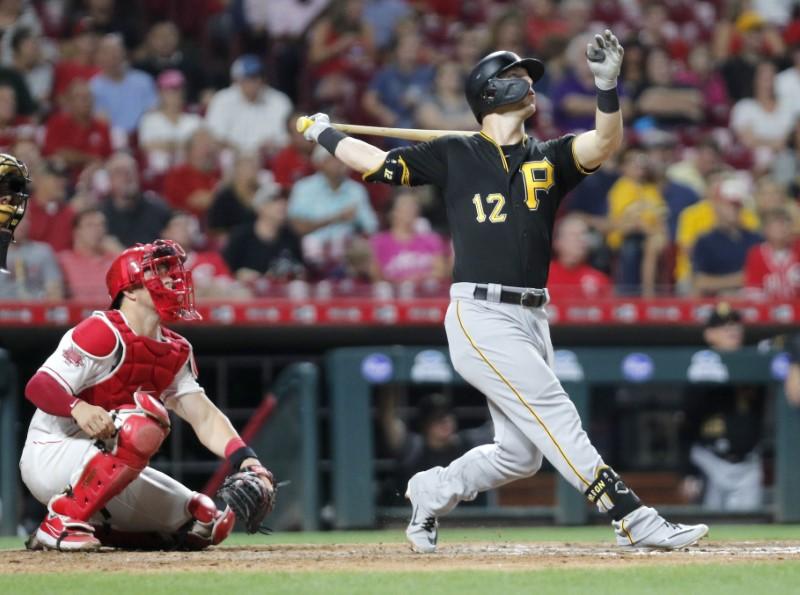 Corey Dickerson homered twice and drove in a career-high five runs to help the Pittsburgh Pirates end a nine-game losing streak with an 11-4 win against the host Cincinnati Reds on Tuesday night in a game marred by a wild brawl.

A benches-clearing fight broke out in the ninth when Reds reliever Amir Garrett charged the Pittsburgh dugout from the mound as he was being removed from the game. Jared Hughes had been ejected earlier in the inning for hitting Starling Marte after both sides had been warned.

Reds right fielder Yasiel Puig, who minutes earlier had reportedly been traded to the Cleveland Indians, started a second skirmish that continued for several more minutes. Puig was ultimately ejected as well.

Dickerson, who sat out the previous three games with left groin discomfort, had a two-run single in the third inning, a two-run homer in the fifth and a solo shot in the seventh. Jose Osuna hit a three-run homer in the ninth for Pittsburgh, which halted its longest losing streak in eight years.

Paul Goldschmidt continued his torrid stretch with a go-ahead home run in the sixth inning — his seventh homer in the past eight games — and host St. Louis held on to beat Chicago.

Tommy Edman added two hits and two stolen bases for St. Louis, which broke a first-place tie with the Cubs on the eve of the trade deadline. The Cardinals improved to 13-5 since the All-Star break.

Javier Baez drove in the lone run for Chicago, which has lost three of four and six of eight. Cubs right-hander Yu Darvish (3-5) drew the hard-luck loss despite holding the Cardinals to two runs on six hits in six innings. He walked none and struck out nine, two shy of his season high. Giovanny Gallegos (3-1) got the win in relief.

Robinson Chirinos belted a solo homer and former Indians outfielder Michael Brantley added an RBI single later in the fifth inning for the Astros, who have won three in a row and 10 of their last 12 games.

Houston’s Jose Altuve posted his second straight three-hit performance and Yuli Gurriel had a one-out single in the second inning to extend his hitting streak to 17 games. Verlander (14-4), who recorded his first win in Cleveland since 2013, has 43 strikeouts over his four-start winning streak.

Matt Olson belted a walk-off home run off Josh Hader in the 10th inning to give host Oakland win over Milwaukee in the opener of a three-game interleague series in Northern California.

Chris Bassitt and five relievers combined on a seven-hitter, helping the A’s prevail in the first meeting between the clubs since 2016. Blake Treinen (5-3) pitched the top of the 10th to get the win.

Olson’s homer, his 22nd of the season, was the left-handed hitter’s ninth off a lefty pitcher this season, and just the second of his career in extra innings. It was the fourth home run Hader (1-4) surrendered to a left-handed batter this season.

Ozzie Albies and Ender Inciarte each had three hits as Atlanta won for just the fifth time in 13 games. The Nationals, meanwhile, are still 38-19 since May 24. Washington trailed 11-1 in the seventh. Teheran (6-7) went 6 2/3 innings and allowed seven hits.

Washington’s Juan Soto hit a two-run homer in the ninth, and Brian Dozier added an RBI single to trim the margin to 11-8 before Luke Jackson retired the side. Washington starter Erick Fedde (1-2) allowed nine runs on nine hits with four walks and four strikeouts as his ERA rose from 3.40 to 4.67.

Smyly (2-5) gave up four hits. He recorded five strikeouts against just one walk while throwing 103 pitches, 71 for strikes. Brandon Belt and Stephen Vogt each had a pinch-hit homer in the eighth for the Giants, who had won 19 of 24 entering this game.

Despite falling behind in the first and again in the fifth, the Rays responded both times to claim the first contest of a three-game set. With the victory, the Rays moved a 1 1/2 games ahead of the Red Sox in the American League East standings.

Adam Jones lifted a sacrifice fly in the first, and Nick Ahmed hit an RBI single in the fourth for the Diamondbacks, who won for the fifth time in their last 12 games, rebounded from dropping three of four in Miami.

The Yankees lost for the sixth time in nine games and dropped to 0-3 this season against Arizona. Tyler Wade hit his first home run of the season for New York.

Jake Odorizzi picked up his career-high 12th win of the season as Minnesota defeated host Miami.

First baseman Garrett Cooper, who leads the Marlins in batting average (.294), left the game in the third inning due to tight left hamstring. Cooper was replaced in the lineup by Martin Prado, who took over at third base with Neil Walker moving to first.

A.J. Pollock had the first of four Los Angeles homers — a leadoff shot — as the Dodgers beat Colorado in Denver.

Kristopher Negron, Russell Martin and Justin Turner also went deep, and Cody Bellinger had two hits for the Dodgers, who became the first team to reach 70 wins this season.

Nolan Arenado and Ian Desmond had two hits apiece for the Rockies, who lost for the 18th time in 24 games in July.

The Mets rebounded from closer Edwin Diaz’s blown save to win their fifth straight game. The White Sox lost for the sixth time in seven games and fell to 2-6 on their season-high, 10-game homestand.

Noah Syndergaard struck out 11 in 7 1/3 innings while allowing one unearned run in what potentially was his final start as a Met. A rumor mill staple as Wednesday’s trade deadline looms, he notched double-digit strikeouts for the second time this season and 16th in his career.

Canning (4-6) looked much more comfortable in a starting role, coming off his most recent outing last week when he was called upon to pitch the 15th and 16th innings of emergency relief in a game against Baltimore, and gave up five runs to take the loss.

Angels rookie Matt Thaiss got the Angels going with a two-run homer off Tigers starter Drew VerHagen (1-2) in the second inning and then added an RBI single in the seventh. The home run was Thaiss’ fifth in 14 games since being called up from Triple-A Salt Lake in early July.

Chris Davis snapped out of an 0-for-18 drought with a solo home run to center field with one out in the eighth inning to break a tie and lead visiting Baltimore over San Diego.

Davis, who had struck out three previous times in the game and 14 times in his previous 16 at-bats, drove an 0-1 offering from Matt Strahm for his eighth homer.

Strahm (4-8) was charged with two more runs in the inning and a total of five runs on five hits and a walk in 1 2/3 innings to suffer the loss. The Padres held a 5-3 lead when he entered the game to start the seventh. The comeback made a winner out of Miguel Castro (1-1).

Seager went 3-for-5 with a home run and four RBIs. Domingo Santana also homered for the Mariners, who won their sixth game in a row, tying their longest winning streak of the season. Scott Servais earned his 300th victory as the Mariners’ manager, second in franchise history to Lou Piniella (840).

Danny Santana homered for the Rangers, who suffered their third straight loss to drop below .500 (53-54).

Vladimir Guerrero Jr.’s ninth-inning grand slam helped Toronto pull away from host Kansas City in a game whose result was in question until a five-run ninth.

Toronto pitchers worked around constant traffic on the bases; the Royals had 18 baserunners. Kansas City was 2-for-14 with runners in scoring position and left a total of 14 runners on base.

Sean Reid-Foley (1-1) earned the win, but it was not easy. He didn’t allow a run in five innings, but he gave up four hits and walked four. Two other baserunners reached base on errors while he was in the game. Mike Montgomery (0-2) lost for the second time in three games since coming to Kansas City from the Cubs.