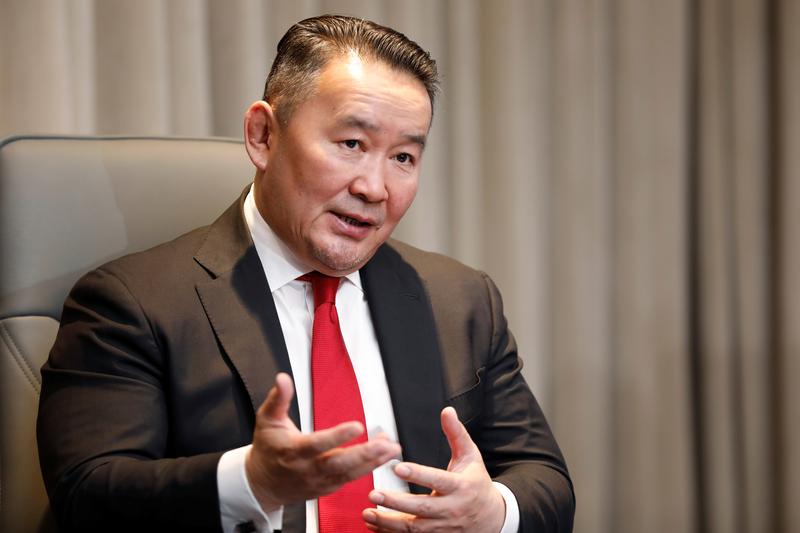 WASHINGTON (Reuters) – Mongolian President Battulga Khaltmaa will visit the White House on Wednesday, seeking help from President Donald Trump on trade and military deals – and possibly a name for the horse his government has symbolically gifted to Trump’s 13-year-old son, Barron.

The vast northern nation locked between Russia and China is known for its ancient breed of tough, tiny horses ridden by Genghis Khan and other warlords – and often gives horses to visiting dignitaries.

The horse is unlikely to make the long trip to the United States, a senior U.S. administration official told reporters, though Mongolian officials are eager that it be given a name. Other U.S. dignitaries to receive a symbolic horse in the past include former Vice President Joe Biden, and former defense secretaries Chuck Hagel and Donald Rumsfeld.

Trump administration officials were eager to highlight the visit of Battulga, a champion wrestler and businessman who leads the democratic nation of only 3 million people, strategically located between two U.S. rivals. It is the first White House visit of a Mongolian president since 2011.

“We sometimes say that Mongolia has only got two physical neighbors – that it’s like a pearl between two oyster shells,” a second U.S. official told reporters.

Mongolia is concerned about its dependence on China, through which most of its goods move, and does not want to be subsumed by Chinese investments in infrastructure, telecommunications and banking, the first U.S. official said, speaking on condition of anonymity.

The nation would like to find more investment from the United States and other countries it considers “third neighbors” for its cashmere, produced by nomadic goat-herders.

Mongolia would also like more trade in weapons and help with its cybersecurity, the U.S. official said.

The country is home to rich deposits of coal, uranium, and rare earth minerals used in weapons, consumer electronics and other goods, but suffers from a lack of transportation options.

A rail link north to the Trans Siberian Railway could be one option, the U.S. official said.

Mongolia, a former Communist country, has also volunteered to play a part in Trump’s diplomatic overtures to Pyongyang, offering to host Trump and North Korean leader Kim Jong Un for a summit. The country is accessible by rail from North Korea.