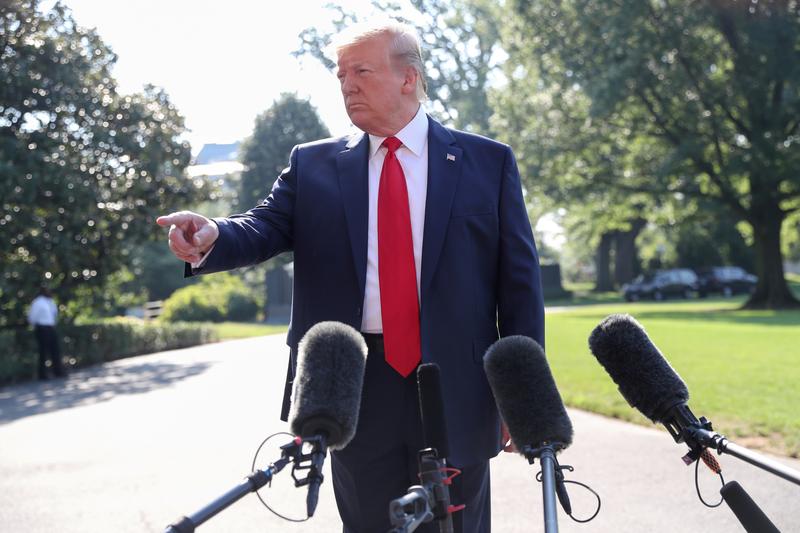 WASHINGTON/BRASILIA (Reuters) – President Donald Trump on Tuesday said he will pursue a U.S. trade agreement with Brazil, suggesting a friendly relationship with President Jair Bolsonaro could help lower trade barriers between the two biggest economies in the Americas.

U.S. President Donald Trump talks to reporters as he departs for travel to Williamsburg, Virginia from the South Lawn of the White House in Washington, U.S., July 30, 2019. REUTERS/Leah Millis

“We’re going to work on a free trade agreement with Brazil,” Trump told reporters at the White House, without giving details.

Trump raised the possibility of a trade deal as U.S. Commerce Secretary Wilbur Ross visited Sao Paulo to address business leaders ahead of a Wednesday meeting with Bolsonaro in Brasilia.

The United States and Brazil, which exchanged more than $100 billion in goods and services last year, have drawn closer since Bolsonaro took office in January following the far-right former army captain’s insurgent election campaign modeled after Trump’s. He has tapped his son Eduardo Bolsonaro as ambassador in Washington.

“Brazil is a big trading partner. They charge us a lot of tariffs, but other than that we love the relationship,” Trump told reporters, citing what he called his great relationship with Brazil and praising Bolsonaro.

But Troyjo said any talks on tariffs would have to include Brazil’s partners in the South American customs union Mercosur, which includes neighbors Argentina, Uruguay and Paraguay.

The powerhouse farm sectors in Brazil and the United States have occasionally found themselves at odds, including a dispute over cotton subsidies resolved at the World Trade Organization in 2014.

The United States threatened steel and aluminum tariffs on Brazil and a number of other countries last year as part of Trump’s “America First” agenda, before granting a permanent exemption to Brazil.

Ross is the first U.S. commerce secretary to visit Brazil since 2011. On Wednesday, he will meet with Bolsonaro and hold talks with Brazil’s economy and infrastructure ministers, Paulo Guedes and Tarcisio Freitas.