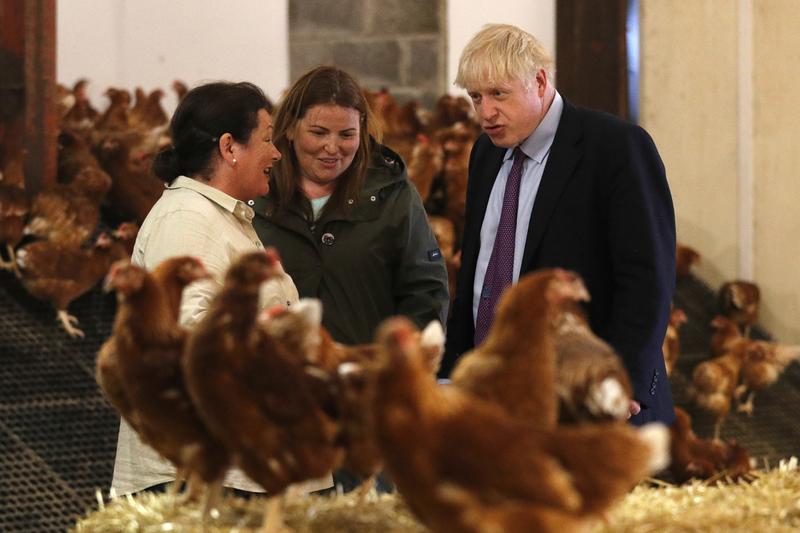 LONDON/DUBLIN (Reuters) – Prime Minister Boris Johnson promised on Tuesday to lead Britain out of the European Union on Oct. 31 “no matter what” as sterling tumbled and Ireland warned that the bloc would not be renegotiating the thrice defeated divorce deal.

The British pound fell on Tuesday as investors bet Johnson’s Brexit brinkmanship could trigger a messy divorce that would sow chaos through the world economy and financial markets.

Sterling crashed through trading barriers, falling to an intraday low of $1.2120 in shallower overnight Asian trade, the lowest since March 2017. The pound has lost 3.6 cents since Johnson was named Britain’s new prime minister a week ago.

“The prime minister made clear that the UK will be leaving the EU on October 31, no matter what,” Johnson’s Downing Street office said in a statement about a phone call with Irish PM Leo Varadkar.

Johnson demanded again that one of the most hotly contested elements of the Brexit divorce agreement – the Irish border backstop – would have to be struck out if there was to be a deal.

“The prime minister made clear that the government will approach any negotiations which take place with determination and energy and in a spirit of friendship, and that his clear preference is to leave the EU with a deal, but it must be one that abolishes the backstop,” Downing Street said.

The backstop is a provision in the deal that would require Britain to obey some EU rules if no other way can be found to keep the land border open between British-ruled Northern Ireland and EU member Ireland. Johnson rejects it as “undemocratic”.

Ireland said the backstop was necessary because of the positions Britain had taken in earlier talks, and that the EU would not renegotiate the Withdrawal Agreement struck by former Prime Minister Theresa May.

“The Taoiseach explained that the EU was united in its view that the Withdrawal Agreement could not be reopened,” the Irish government said.

“Alternative arrangements could replace the backstop in the future… but thus far satisfactory options have yet to be identified and demonstrated,” the Irish government said.

Ever since the 2016 EU referendum, the pound has gyrated to the rhetoric of the Brexit divorce: after the result was announced, it had the biggest one-day fall since the era of free-floating exchange rates was introduced in the early 1970s.

“We see little chance of Brexit fears calming in the near-term, and if anything will likely escalate further as we head closer to the October 31st deadline,” said Mohammed Kazmi, a portfolio manager at UBP which has $136 billion of assets under management.

On entering Downing Street on Wednesday, Johnson set up a showdown with the EU by vowing to negotiate a new deal and threatening that, if the bloc refused, he would take Britain out on Oct. 31 without a deal to limit economic dislocation.

Irish government bond yield spreads over Germany hit their widest levels in over a month on Tuesday, as worries grow over the potential impact of a no-deal Brexit on Ireland.

Many investors say a no-deal Brexit would send shock waves through the world economy, tip Britain’s economy into a recession, roil financial markets and weaken London’s position as the pre-eminent international financial center.

Supporters of Brexit say that while there would be some short-term difficulties, the disruption of a no-deal Brexit has been overplayed and that in the long-term, the United Kingdom would thrive if it left the European Union.

Johnson was expected to tell Welsh farmers on Tuesday they will get a better deal after Brexit, part of a countrywide tour to win support for his “do or die” pledge to leave the European Union by Oct. 31.