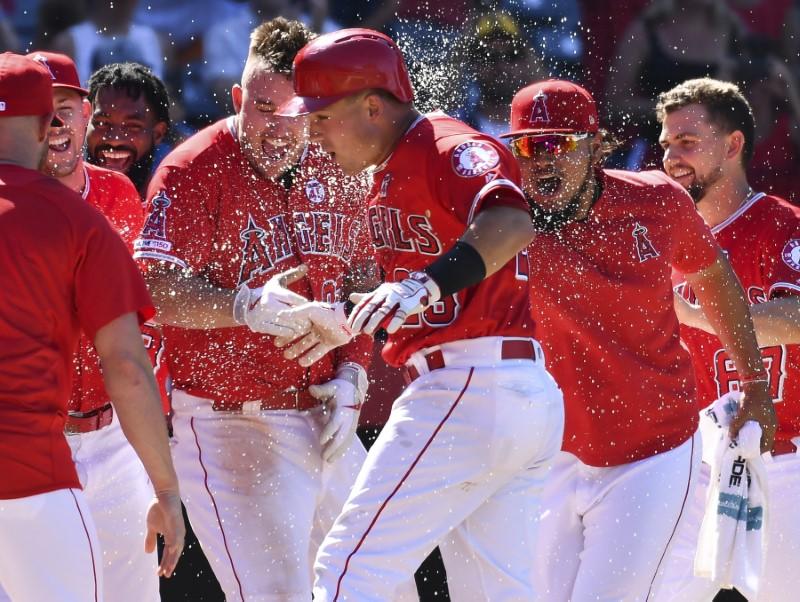 Third baseman Matt Thaiss hit a pair of home runs, including a walk-off solo shot in the ninth, to carry the Los Angeles Angels past the Baltimore Orioles, 5-4, in Anaheim, Calif., on Sunday afternoon.

Jul 28, 2019; Anaheim, CA, USA; Los Angeles Angels third baseman Matt Thaiss (23) gets a shower as he heads to home plate after hitting a game-winning home run in the 9th inning against the Baltimore Orioles at Angel Stadium of Anaheim. It was Thaiss’ second home run of the game. Mandatory Credit: Robert Hanashiro-USA TODAY Sports

Thaiss stroked a 95 mph fastball on a full count from Baltimore reliever Mychal Givens (1-5) to right-center to end the Angels’ three-game losing streak and prevent the home side from being swept in the four-game series.

Brian Goodwin went 2-for-4 with a double, and reliever Taylor Cole (1-1) earned the win for the Angels, who are 1-3 on their seven-game homestand. Pujols, who is sixth all-time in home runs, moved within 10 of fifth-place Willie Mays.

Visiting Tampa Bay overcame a seven-run deficit and scored the go-ahead run in the ninth on Joey Wendle’s bases-loaded groundout to defeat Toronto.

The Blue Jays led 8-1 after five innings in the rubber match of the three-game series, but the Rays tied the game with three runs on two homers in the eighth. Toronto overcame a seven-run deficit Saturday to win 10-9 in 12 innings.

The Rays loaded the bases on two walks and a single against Daniel Hudson (6-3) with one out in the ninth. Wendle drove in a run on a groundout to second against Derek Law.

Altuve was one of three Astros to homer in the series finale, following solo blasts from George Springer leading off the game and Yordan Alvarez with two outs in the third. Altuve drove home Miley and Springer with his 16th homer this season, a 388-foot shot to left-center field off Cardinals right-hander Dakota Hudson (10-5).

Altuve reached the hit milestone in his 1,190th game, a franchise record.

Strasburg (14-4), who has won seven straight starts, now leads the majors in victories. He fanned nine, walked none and hit two batters. He has allowed just four earned runs this month and has six RBIs in July.

The Dodgers had won 21 of their previous 35 games at Nationals Park.

Gio Urshela, Cameron Maybin and Edwin Encarnacion had two hits apiece as the Yankees put behind them being outscored 38-13 through the first three games of the series. Domingo German got his 13th win to tie for the American League lead, allowing three runs on four hits and a walk in 5 1/3 innings and matching his season high with nine strikeouts.

German (13-2) ended a winless run for Yankees starters who, as a group, had a 16.62 ERA over their previous seven games. In that span, New York allowed seven or more runs in each contest, a franchise-worst streak.

Kyle Schwarber belted two home runs, including a grand slam, and drove in a career-best seven runs as visiting Chicago beat Milwaukee to salvage the finale of a three-game series.

After watching their bullpen squander late leads in the first two games, Schwarber and the Cubs’ offense put the game out of reach. Schwarber, batting eighth, added a three-run homer and a single, and Victor Caratini hit a pinch-hit, three-run homer to make 10-3 in the sixth.

Chicago reliever Brad Brach (4-3) retired the only batter he faced for the win. Cubs starter Jose Quintana was lifted with two outs in the fifth and allowed three runs on four hits.

Khris Davis drew a bases-loaded walk with one out in the ninth inning, and Oakland beat visiting Texas after blowing a two-run lead in the eighth.

Oakland improved to 24-11 since June 17 despite closer Liam Hendriks proving unable to get the final five outs.

Entering the ninth down 5-4, Matt Olson tied the game with an RBI single up the middle. Texas opted to intentionally walk Mark Canha, and Davis won it by taking a full-count fastball that was slightly high and out of the strike zone.

J.P. Crawford singled home the winning run with one out in the 10th inning as Seattle defeated visiting Detroit.

Dylan Moore led off the bottom of the inning with a double down the right field line off Tigers right-hander Jose Cisnero (0-2). An out later, Crawford hit a fly ball that fell in shallow center field, with Moore sliding home headfirst before the throw from JaCoby Jones could reach catcher John Hicks.

Left-hander Roenis Elias (4-2) pitched a scoreless inning for the victory. The Mariners won their fifth in a row and sent the Tigers to their sixth successive defeat.

Catcher J.T. Realmuto hit a grand slam, and Philadelphia beat visiting Atlanta to salvage a game in the three-game series.

Realmuto’s blast, his 14th, was one of four homers by the club. Philadelphia also got a solo homer from Bryce Harper, his 18th; a solo shot from Adam Haseley, his third; and a two-run homer from Rhys Hoskins, his 22nd.

The Phillies were leading 2-0 and had the bases loaded with no outs in the fifth inning. After Harper struck out and Hoskins popped out, Realmuto launched a ball deep into the seats in left-center field. It was the first grand slam by a Philadelphia catcher since Mike Lieberthal in July 2006.

With speculation still floating that San Francisco could move Madison Bumgarner before Wednesday’s trade deadline, the 29-year-old improved to 6-7 on the season by defeating San Diego in the rubber match of the three-game series.

Bumgarner allowed four runs on four hits and two walks with six strikeouts. He threw 86 pitches, with 61 going for strikes as the Giants won for the 13th time in 17 games.

Will Smith picked up his 26th save despite giving up a two-run homer to Wil Myers with two out in the ninth.

Jorge Polanco, Miguel Sano, Jonathan Schoop and Max Kepler each homered, and Kyle Gibson gave up one run over six innings to pick up his 10th win as visiting Minnesota cruised to victory over Chicago.

Sano finished 3-for-4 with three RBIs and two runs scored, Polanco and Nelson Cruz both had two hits and two RBIs, and Byron Buxton also had two hits as the Twins extended their American League Central lead to two games over the Cleveland Indians.

Gibson (10-4) gave up seven hits and a walk while striking out nine. He struck out three batters in the sixth inning with the bases loaded and no outs following a Jon Jay RBI infield single.

Cleveland pitcher Trevor Bauer turned and threw the ball over the center field fence as manager Terry Francona approached to pull him from a loss to Kansas City, punctuating a frustrating afternoon for Bauer.

Bauer allowed eight runs (seven earned) on nine hits in just 4 1/3 innings, and the Royals sent 11 men to the plate in the fifth inning to avoid a four-game sweep.

As Francona reached the mound, he and Bauer exchanged words. Francona then followed closely behind Bauer into the dugout and the two disappeared into the tunnel. They both were seen, fuming, but separate in the dugout.

Jason Vargas tossed 5 2/3 innings, and New York held off a late rally by visiting Pittsburgh to complete a three-game sweep.

The Mets have won four straight and are 10-5 since the All-Star break. The Pirates have lost eight in a row to fall to 2-14 in the second half.

The 36-year-old Vargas (6-5) earned his second win of the homestand and his third straight overall by allowing three runs on six hits and three walks while striking out five. He is 5-5 with a 3.58 ERA in his last 16 starts dating back to April 19.

Tucker Barnhart had a pair of RBI singles to highlight his three-hit performance as host Cincinnati beat Colorado.

Barnhart joined Jose Iglesias by notching an RBI single in the second inning before adding another in the sixth for the Reds, who posted their first series win versus Colorado since May 30-June 2, 2016.

Former Red Yonder Alonso belted a two-run homer and joined Ryan McMahon and David Dahl with two hits for the reeling Rockies, who have lost 11 of their last 14 games.

Rojas hit a leadoff homer for the second straight game, getting an 84 mph slider and pulling it 404 feet to left. Rojas has three homers this season — the other came on July 4 — and all of them were first-inning, leadoff shots.

Anderson’s homer, a solo blast that came in the sixth inning, was his 14th of the season. That’s three more than he had last year in his first full season in the majors.