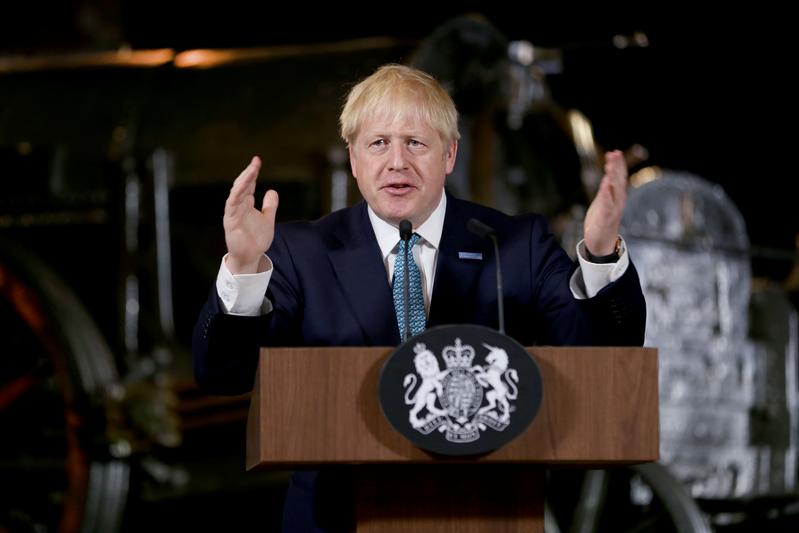 LONDON (Reuters) – Prime Minister Boris Johnson will tell Welsh farmers on Tuesday they will get a better deal after Brexit, part of a countrywide tour to win support for his “do or die” pledge to leave the European Union by Oct. 31.

Britain’s Prime Minister Boris Johnson gestures during a speech on domestic priorities at the Science and Industry Museum in Manchester, Britain July 27, 2019. Lorne Campbell/Pool via REUTERS

Just days after taking office as prime minister, Johnson kicked off the domestic tour, underlining his desire to win Britain over rather than courting EU leaders to try to persuade them to change their minds on a divorce deal he says is dead.

His reluctance to engage with EU leaders until they signal a willingness to renegotiate the agreement Britain’s parliament rejected three times has increased the possibility of a no-deal Brexit, sending the pound to its lowest level since early 2017.

He hopes that the threat of Britain leaving without a deal, which would send shocks waves through the world economy, will persuade the EU’s biggest powers – Germany and France – to agree to revise the Withdrawal Agreement.

“I will always back Britain’s great farmers and as we leave the EU we need to make sure that Brexit works for them,” Johnson said before arriving in Wales.

“Once we leave the EU on 31st October, we will have a historic opportunity to introduce new schemes to support farming – and we will make sure that farmers get a better deal. Brexit presents enormous opportunities for our country and it’s time we looked to the future with pride and optimism.”

Many farmers fear a no-deal Brexit could threaten their livelihoods by suddenly removing subsidies, blocking their access to European markets and leaving them vulnerable to competition from lower-cost producers like the United States that do not match European animal welfare standards.

Johnson said leaving the EU would allow the government to scrap the Common Agricultural Policy — a system of farm subsidies unpopular in Britain which contributes more than it receives — and sign new trade deals to expand the market.

Johnson’s visit to Wales is part of a country-wide charm offensive, with the new prime minister trying to sell Brexit, something he has said his predecessor, Theresa May, and her government failed to do while in office.

A figurehead for the successful “Leave” campaign in the 2016 referendum, Johnson has repeated daily that Britain will leave on the latest deadline of Oct. 31, with or without a deal, and will thrive afterwards.

But by playing hardball with the EU by telling its leaders that he will only talk when they drop their insistence on not renegotiating the deal, he has increased the likelihood of a no deal exit, which he says he does not want.

On Monday, the pound tumbled to its lowest against the dollar since early 2017 on the strengthened rhetoric.