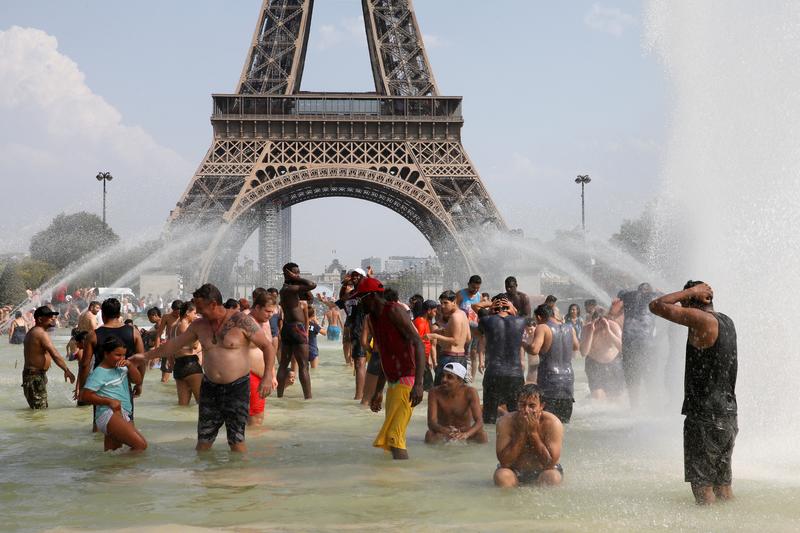 LONDON (Reuters) – “Shall we all just kill ourselves?”

FILE PHOTO: People cool off in the Trocadero fountains across from the Eiffel Tower in Paris as a new heatwave broke temperature records in France, July 25, 2019. REUTERS/Pascal Rossignol/File Photo

It was an odd title for a comedy night, but British stand-up Carl Donnelly turned out to have chosen an environmental theme with impeccable timing.

That foretaste of a radically hotter world underscored what is at stake in a decisive phase of talks to implement the 2015 Paris Agreement, a collective shot at avoiding climate breakdown.

With study-after-study showing climate impacts from extreme weather to polar melt and sea level rise outstripping initial forecasts, negotiators have a fast-closing window to try to turn the aspirations agreed in Paris into meaningful outcomes.

“There’s so much on the line in the next 18 months or so,” said Sue Reid, vice-president of climate and energy at Ceres, a U.S. non-profit group that works to steer companies and investors onto a more sustainable path.

“This is a crucial period of time both for public officials and the private sector to really reverse the curve on emissions,” Reid told Reuters.

In October, the U.N.-backed Intergovernmental Panel on Climate Change (IPCC) warned emissions must start falling next year at the latest to stand a chance of achieving the deal’s goal of holding the global temperature rise to 1.5 degrees Celsius.

With emissions currently on track to push temperatures more than three degrees higher, U.N. Secretary-General Antonio Guterres is working to wrest bigger commitments from governments ahead of a summit in New York in September.

Telling world leaders that failing to cut emissions would be “suicidal,” the Portuguese diplomat wants to build momentum ahead of a fresh round of climate talks in Chile in December.

By the time Britain convenes a major follow-up summit in late 2020, plans are supposed to be underway – in theory at least – to almost halve global emissions over the next decade.

“In the next year-and-a-half we will witness an intensity of climate diplomacy not seen since the Paris Agreement was signed,” said Tessa Khan, an international climate change lawyer and co-director of the Climate Litigation Network.

U.S climatologist Michael Mann believes emissions need to fall even more drastically than the IPCC assumes since the panel may be underestimating how far temperatures have already risen since pre-industrial times.

“Our work on this indicates that we might have as much as 40% less carbon left to burn than IPCC implies, if we are to avert the 1.5 Celsius warming limit,” said Mann, director of the Earth System Science Center at Pennsylvania State University.

Mann has urged governments to treat the transition to renewable energy with the equivalent urgency that drove the U.S. industrial mobilization in World War Two.

So far, no major economy has taken heed.

Although Britain boosted the Paris Agreement in June by committing to net zero carbon emissions by 2050, the country, preoccupied by Brexit, is far from on a climate war footing.

Likewise, a push led by France and Germany for the European Union to adopt a similar target was relegated to a footnote at a summit in Brussels after opposition from Poland, the Czech Republic and Hungary.

Given the uncertain prospects for international cooperation to stabilize the climate on which life on earth depends, some are starting to steel themselves for the unraveling of the world they once knew.

“Either we radically transform human collective life by abandoning the use of fossil fuels or, more likely, climate change will bring about the end of global fossil-fuelled capitalist civilization,” wrote U.S. author Roy Scranton, in an April essay in MIT Technology Review.

“Revolution or collapse — in either case, the good life as we know it is no longer viable.”