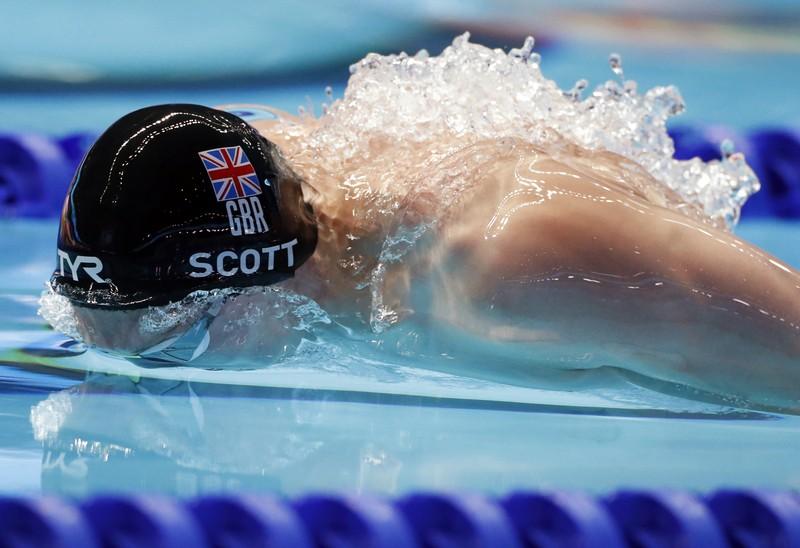 GWANGJU, South Korea (Reuters) – Duncan Scott swam the second-fastest relay split of all time in the anchor leg of the men’s 4x100m medley on Sunday, overhauling his U.S. and Russian rivals to secure gold for Britain and deny Caeleb Dressel a seventh world title in Gwangju.

Britain’s come-from-behind victory came in the penultimate event of a pulsating last night in the pool. It came just before the U.S. women set a world record to win the medley relay, with Regan Smith breaking the backstroke record in the lead-off leg.

Scott plunged into the pool with ground to make up on the United States after Dressel opened up a lead for Nathan Adrian with a typically blistering butterfly leg, with Russia also breathing down the American’s neck.

However, the Glasgow-born 22-year-old swam an incredible 46.14 seconds, the fastest since American Jason Lezak’s 46.06 at the Beijing Olympics, to run down Adrian and give Britain the gold and their first win over the U.S. in the event.

“I can’t say I thought I had that split in me,” said Scott, still rubbing his head in disbelief. “I’m just sort of speechless I’ve been able to put that race together.”

An elated Peaty said he was so pumped he would not sleep for three days.

“That’s testament to who we are as racers, who we are as people,” said the Olympic and world breaststroke champion of the team, which also included James Guy and Luke Greenbank.

“We just showed that the British are always up for a race.”

South African Zane Waddell (24.43) grabbed a surprise gold in a blanket finish to the men’s 50m backstroke, ahead of Russians Evgeny Rylov and Kliment Kolesnikov, the world record holder. Only 0.08 seconds separated the top three.

In the women’s 50m breaststroke America’s Lilly King got to the wall first in 29.84, while in the next lane 14-year-old Italian Benedetta Pilato burst into tears after seeing her name in the silver medal position ahead of Russia’s Yuliya Efemova.

“We got to the wall and she was crying immediately,” said King. “I didn’t know if it was happy tears or sad tears, she’s 14. But I think they were happy tears, I hope they were.”

The third of the water-churning one-lap dashes saw Simone Manuel complete the 50/100m freestyle double, the American getting her fingertips to the wall ahead of Sweden’s Sarah Sjostrom and Australian Cate Campbell.

Florian Wellbrock also got his name in the record books after the German added the 1,500m freestyle crown to his 10km open water gold in Gwangju, becoming the first athlete to win titles in two different sports at a single world championships.

The 30-year-old won her first world gold in Rome and 10 years later she is still setting the standard, coming home 1.68 seconds ahead of China’s Ye Shiwen, with Japan’s Yui Ohashi taking bronze.

While governing body FINA said it was delighted the way Gwangju had staged the event, the one sad note for South Korea was that it became the fourth host after Colombia (1975), Ecuador (1982) and Spain (1986) not to win a swimming medal.

But Lee Yong-sup, head of the championships organizing committee, told a news conference on Sunday he hoped the city, some 330km southwest of the capital Seoul, could one day become a hot-bed for Korean swimming.

“I will review the hosting of a Korea Swimming Promotion Center in cooperation with the government,” he said, adding that he would look to set up competitions to unearth young swimming talent.

It was not all sunshine and smiles on the final day of the championships, however.

South Korean police said they had banned Hungarian swimmer Tamas Kenderesi from leaving the country as they investigate allegations of sexual harassment against the Rio Olympic bronze medalist.

Kenderesi was arrested in the early hours of Sunday and questioned over an incident at a nightclub, an official at the Gwangju Seobu Police Station told Reuters.

Australian swimmer Shayna Jack said her ‘B’ sample had confirmed the presence in her sample of Ligandrol, an anabolic agent. The 20-year-old had revealed on Saturday that she had tested positive for a banned substance in an out-of-competition test on June 26.

Jack was withdrawn from the Australia squad ahead of the championships with the swimmer and Swimming Australia initially saying it was for personal reasons.

Swimming Australia defended concealing the positive test while her team mate Mack Horton was conducting a public campaign against China’s Sun Yang, who tested positive in 2014 and has another case pending at the Court of Arbitration for Sport.