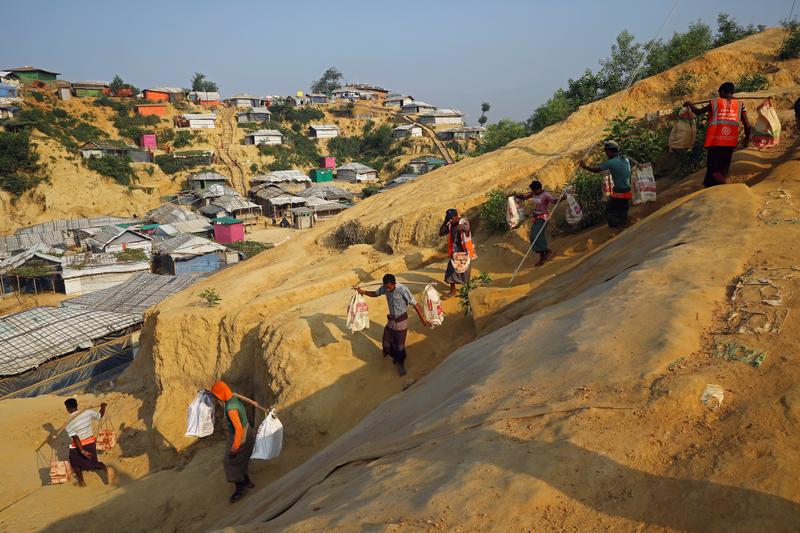 DHAKA (Reuters) – Rohingya refugees in Bangladesh refuse to return to Myanmar unless they are recognized as an ethnic group in their home country, leaders told visiting Myanmar officials on Sunday as fresh repatriation talks started.

A campaign by Myanmar’s military in response to insurgent attacks in 2017 drove 730,000 Rohingya Muslims to flee to Bangladesh’s southeastern border district of Cox’s Bazar, where they live in squalid camps, fearing further persecution if they return.

This is the second time Myanmar officials have visited the camps in Cox’s Bazar in an effort to convince Rohingya refugees to kick-start the repatriation process. In October, Rohingya rejected an offer to go back to their homeland when a Myanmar delegation held talks with leaders of the group.

The Myanmar delegation, led by permanent foreign secretary Myint Thu, held talks with 35 Rohingya leaders in Cox’s Bazar on Saturday and Sunday amid tightened security in the camps.

Rohingya leaders said they wanted Myanmar to recognize them as an ethnic group with the right to Myanmar citizenship before they return.

“We told them we won’t return unless we are recognized as Rohingya in Myanmar,” Dil Mohammed, one of the Rohingya leaders who joined the talks, told Reuters by telephone.

He also said they will not return to Myanmar unless demands for justice, international protection and the ability to go back to their original villages and lands are met.

“We want citizenship, we want all our rights. We don’t trust them. We will return only if international protection is in place,” he said.

“We will return to our own land … (we) don’t want to end up living in camps.”

In November, a formal move to start the repatriation process stalled as no Rohingya agreed to return to Myanmar.

The U.N. refugee agency and aid groups are also doubtful about the plan as they fear for the safety of Rohingya in Myanmar.

“We are ready to begin the repatriation anytime. It is up to Myanmar to create a conducive environment to allow the Rohingya to return to their homeland,” said Abul Kalam, Bangladesh’s refugee relief and repatriation commissioner.

With the repatriation plan largely stalled, Bangladesh has been considering relocating Rohingya refugees to an island in the Bay of Bengal, but some have expressed concern this could lead to a new crisis given the island is vulnerable to cyclones.

Myanmar has made “minimal” preparations for the return of Rohingya sheltering in Bangladesh, an Australian think-tank said.