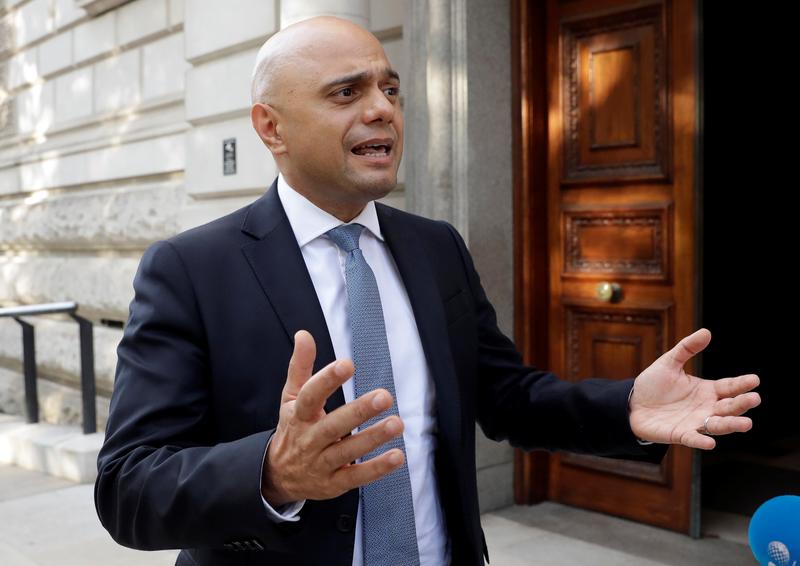 Britain’s new Chancellor Sajid Javid speaks to the media as he arrives at the treasury in London, Britain, July 24, 2019. Matt Dunham/Pool via REUTERS

LONDON (Reuters) – New British finance minister Sajid Javid plans to announce spending of around 1 billion pounds to make sure the country is properly prepared for a possible no-deal Brexit in October, a newspaper reported.

Javid told the Sunday Telegraph he would overhaul the British Treasury’s approach to Brexit, starting with “significant extra funding” announcements in the coming days to get Britain fully ready to leave the European Union on Oct. 31, with or without a deal.

The extra spending would include financing a major public information campaign for individuals and businesses.

The Sunday Telegraph also quoted Javid as saying he had plans for 500 new Border Force officers and possible new infrastructure around the country’s ports.

Javid’s predecessor Philip Hammond, who opposed leaving the EU without a transition deal, was accused by Brexit supporters of failing to spend enough money to get Britain ready for a no-deal Brexit, undermining its negotiating position with Brussels.

Prime Minister Boris Johnson has said he wants to rework the Brexit deal that former leader Theresa May struck with the EU but he also says he is prepared to take Britain out of the bloc without one on Oct. 31, if necessary.