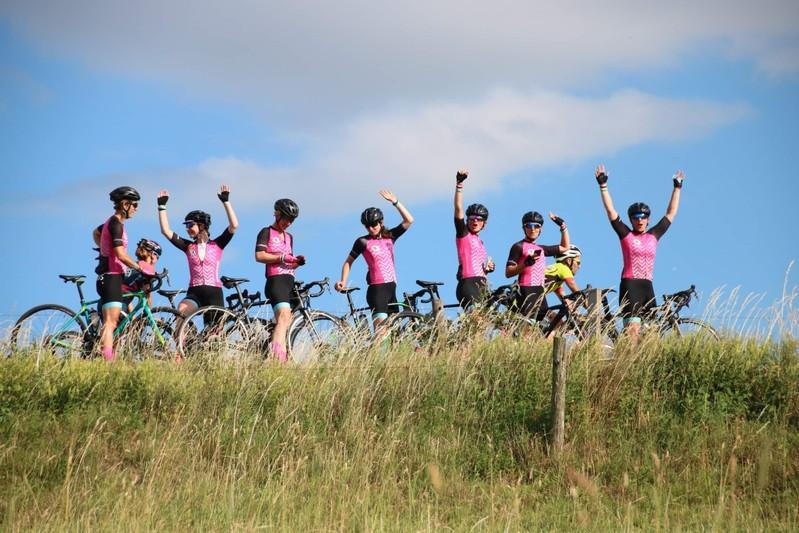 FILE PHOTO: Members of InternationElles, a team of female cyclists, are seen during Stage 8 of the Donnons des Elles au Velo J-1 event in France, July 12, 2019 in this image obtained from social media. Internationelles/Mona Pantel/via REUTERS

The Internationelles, a group of women fighting for equality, formed their own mini-peloton for the 3,480km route to highlight the lack of a women’s Tour de France.

Riding each of the 21 stages the day before men, the Internationelles survived boiling heat, freezing cold and 30 mountain climbs across the Vosges, Pyrenees and the Alps.

What is more, because of freak weather, the Internationelles dismounted on the Champs-Elysees on Saturday with the full distance in their legs, 100km or so more than the men who skipped Friday’s summit finish in Tignes because of landslides and one of Saturday’s two ascents.

As a way of banging the message home, it could hardly have worked out any more perfectly for the plucky women — five British, three Australian, one American and one Dutch — who survived one of sport’s most extreme challenges.

“We didn’t have the option of quitting or cutting it short. We rode all the way up to Tignes and it was absolutely chucking it down, it was really dangerous, but we rode through it.”

Dixon, who works for a tech company, said she had asked to join the French women’s group Donnons des Elles au Velo who have been riding the Tour de France route since 2015.

Instead, the Internationelles joined their French counterparts on the road and the message appears to be getting across with Amaury Sport Organization (ASO), the owners of the Tour, saying they were looking to launch a major women’s race.

“The fact we are so international has maybe spread the message wider,” said Dixon, who has ridden in the world amateur championships. “It’s a scandal that women don’t have the same opportunities as men in this day and age.

“Hopefully we have helped force their hand.”

Since 2014 the world’s top female riders have had La Course by Le Tour to showcase their skills. Initially it was a mountain stage and a TT. This year it was a single stage, four laps of the men’s individual TT course in Pau won by Dutch great Marianne Vos — a “slap in the face” agreed Dixon.

“We’re not suggesting a complete Tour de France although we have shown that if amateurs can do it, then of course women professionals can do it,” Dixon said. “We just want women to have a proper stage race, in France.

“La Course is just not good enough. There are great role models in women’s cycling but without a Tour equivalent, people don’t know them. So many other sports, the women are as well known as the men. Look at Paula Radcliffe in marathon.”

Dixon said one of the highlights was meeting the Team Ineos riders including 2018 winner Geraint Thomas and staring in disbelief at the team bus equipped with eight washing machines.

“They could not believe what we were doing,” she said.

Asked what had stood out over the three weeks on the road, Dixon said the infamous 23km Galibier climb was the toughest, especially having fallen off earlier in the day.

“I could not stop crying,” she said.

She also said the heat was so intense in the Pyrenees that the entire team went to a car wash to cool down.

Everything worked out in the end though.

“We’re just relieved, the last three days in the mountains were just unbelievable. I can’t believe we ended up doing more distance and more elevation than the guys,” she said.

“We’re all amateurs, all have jobs, a couple of are mums. We’ve been hurting since day one. But it was worth it.”