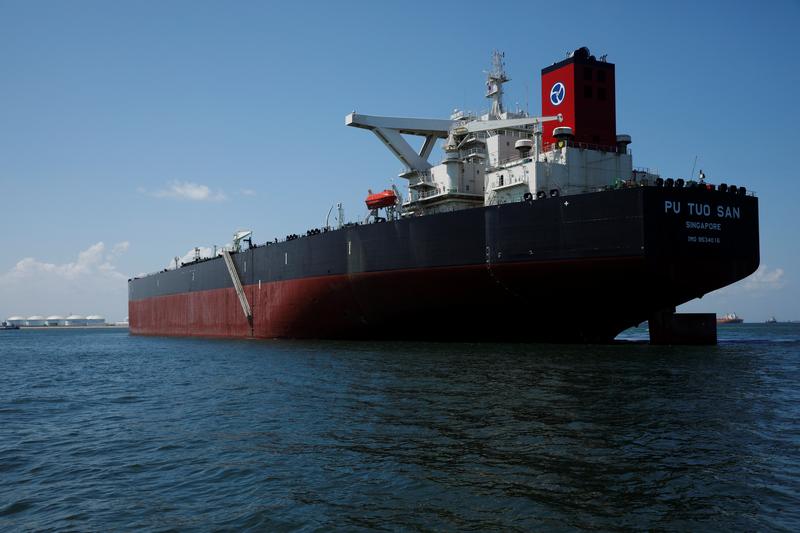 By Roslan Khasawneh and Chen Aizhu

ONBOARD THE PU TUO SAN (Reuters) – Off the coast of Singapore, the world’s largest ship refueling center, a bunker barge sidled next to the supertanker Pu Tuo San to fill the giant vessel with a new type of fuel that will meet global standards that start up in January.

With a little over five months left until stricter marine fuel rules come into effect, shippers such as Singapore’s Ocean Tankers that own the very large crude carrier (VLCC) Pu Tuo San have started testing out lower sulfur fuel to prepare their fleet for the transition.

The move will affect fuel supplies to more than 50,000 merchant ships globally. Shippers will have to either invest in exhaust cleaning systems, known as scrubbers, to continue using cheaper high-sulfur fuels, or burn more expensive oil products, such as very low-sulfur fuel oil (VLSFO) and marine gasoil, or use liquefied natural gas (LNG).

The bulk of the global shipping fleet is expected to switch to low-sulfur fuels as only about 3,600 ships will have installed scrubbers by 2020, data from ship classification society DNV-GL showed.

Ocean Tankers, the shipping unit of Singapore’s largest independent oil trader Hin Leong Pte Ltd, said it will convert its fleet of more than 100 oil tankers to burn VLSFO instead of high-sulfur fuel oil in the fourth quarter.

The Reuters energy team boarded the Pu Tuo San on July 11, which loaded about 1,000 tonnes of VLSFO for the first time. The ship also loaded 2,000 tonnes of high-sulfur fuel oil. A laden VLCC will typically burn about 55 tonnes of fuel oil per day at a normal cruising speed.

The Pu Tuo San is currently heading to Fujairah in the United Arab Emirates.

Concerns over the compatibility and stability of various blends of VLSFO has prompted shippers to test the new fuel type well ahead of the 2020 deadline.

“We have been training the operators in proper bunker management and segregation, preventive maintenance, as well as to ensure that heating temperature is in accordance with engine maker’s specifications,” Ocean Tankers said in an e-mail.

“We do have concerns which is why we’re now in a trial period where our own fleet is starting to burn LSFO.”

Ocean Bunkering Services, the bunkering arm of the Hin Leong Group, is the top marine fuel supplier in Singapore.

Demand for low-sulfur marine fuels in Singapore climbed to a record high in June as the shipping industry prepares for the new IMO rules.