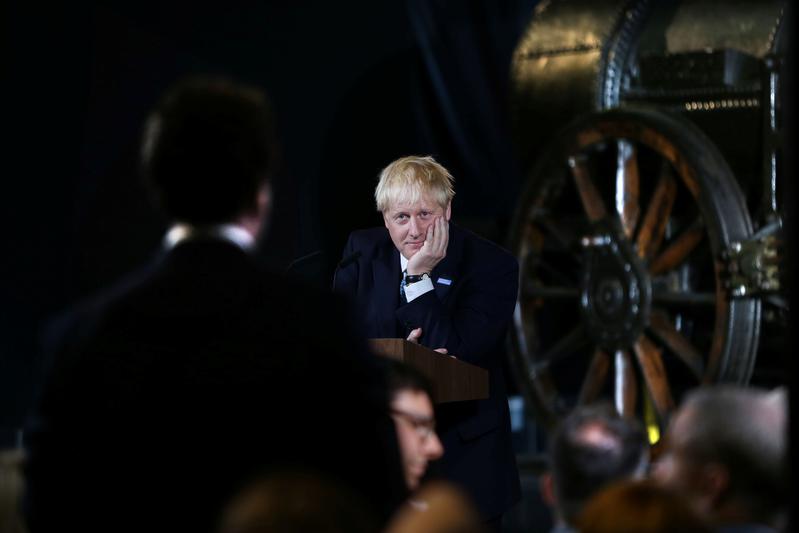 BRUSSELS/PARIS (Reuters) – The European Union is offering new British Prime Minister Boris Johnson a wary welcome, insisting it will consider any detailed new ideas he has on Brexit but cautious lest his gambit is ultimately to blame Brussels for a no-deal departure.

Britain’s Prime Minister Boris Johnson looks on during a speech on domestic priorities at the Science and Industry Museum in Manchester, Britain July 27, 2019. Lorne Campbell/Pool via REUTERS

The 27 remaining EU members say publicly and privately that the divorce settlement, agreed with London but rejected three times by Britain’s parliament, is closed.

Johnson says the Irish backstop, an insurance against a hard border on a new EU frontier between Ireland and Northern Ireland, must be struck from that Withdrawal Agreement.

“He wants a deal without a backstop, which he himself knows doesn’t work,” said an EU source who has been involved in Brexit discussions. “They have to come with a credible idea.”

On the eve of his leadership victory, Johnson evoked the spirit of the moon landing 50 years ago to say frictionless trade at the Irish border was achievable after Brexit, which is due to happen on Oct. 31.

“October is around the corner. The moon mission was planned for several years. It could take 10 years to develop a technical solution,” said an EU diplomat.

Johnson has spoken by telephone with French President Emmanuel Macron and German Chancellor Angela Merkel, as well as Jean-Claude Juncker, head of the European Commission, which has led the EU side of Brexit talks.

The British leader has invitations, but so far no scheduled visits to meet his European counterparts before a G7 meeting in France at the end of August. Johnson’s itinerary so far has focused on Britain.

Johnson has said he would prefer an exit deal, but was willing to pull Britain out of the European Union at the end of October without one, ideally with both sides retaining zero tariffs. EU sources dismiss the idea of such a mini-deal or managed no deal, lacking a divorce bill of over 30 billion pounds ($37.1 billion) and retaining certain perks of the single market.

“Say you want my car, but we can’t agree on the price. So you say let’s have a mini-deal so that you can drive it around for two years until we reach an agreement. Why would I accept this?” an EU diplomat said.

Johnson said in a speech on Saturday, while also insisting the Irish backstop be ditched, that he had very friendly relations with EU leaders and that Britain would be neither disengaged nor aloof and would try to solve the problem.

Even if some are lukewarm towards Johnson, they welcome the end of a two-month period with no effective British leader and say a stronger prime minister might be good.

“It might make a difference. We don’t know in advance. It could be like Nixon going to China,” an EU diplomat said, referring to U.S. President Richard Nixon’s 1972 visit to Beijing that abruptly normalised U.S.-China relations.

One diplomat described Johnson as a chameleon.

“He has many facets. He can be charming. Now he’s put forward the bully, but he is capable of acting differently.”

Many in Europe though are already downbeat.

Norbert Roettgen, an ally of Germany’s Merkel, said in a tweet addressed to Johnson that “neither boastful speeches nor bullying” would make the EU abandon its principles and unity.

Some EU diplomats and officials believe Johnson is already bent on a no-deal Brexit, even if the current British parliament appears unlikely to accept this and, in the view of many in Europe, it would devastate the UK economy.

But the no-deal call may be more for domestic consumption.

“He wants to be divisive, clear, to talk to his base, probably with a view to call an election soon. We can’t rule out an election before October 31,” an EU diplomat said, adding that a larger majority could make Johnson more willing to accept a compromise and push it through parliament.

A UK election campaign could also likely see a ramping up of the blame game, with Brussels the target, even if EU officials insist compromises on the backstop and Brexit extensions at Britain’s request demonstrate EU flexibility.

“There will be a communication war … The truth is that blaming Brexit or a no deal on the EU may be a good communication strategy, but it’s simply not the reality,” an EU source said.