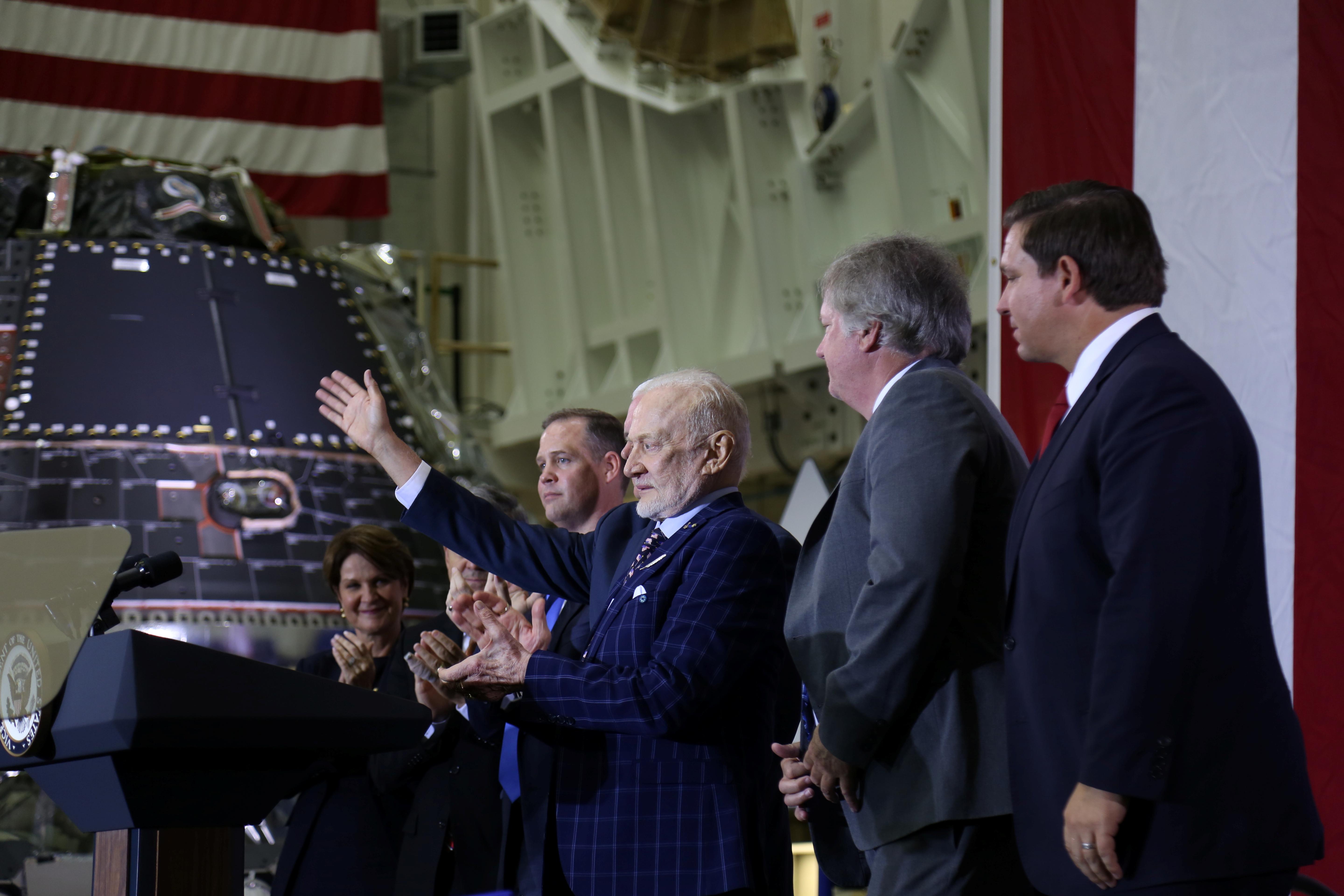 CAPE CANAVERAL, Fla. (Reuters) – Capping a week of celebrations over the historic Apollo 11 mission, Vice President Mike Pence joined astronaut Buzz Aldrin on Saturday at the launch pad in Florida that sent the moonwalker and his two crew mates to space for humankind’s first steps on the lunar surface 50 years ago.

Pence joined NASA Administrator Jim Bridenstine and Aldrin, the second man to walk on the moon behind his fellow astronaut Neil Armstrong, at NASA’s Kennedy Space Center for a ceremony commemorating the 50th anniversary of the moon landing that enthralled people around the world in 1969.

“If Neil Armstrong, Buzz Aldrin and Mike Collins are not heroes, then there are no heroes,” Pence told a crowd of dozens of space industry executives and NASA staff in the Operations and Checkout building, the 58-foot-tall (18 meters) chamber that once housed the Apollo 11 command module for testing. “We honor these men today, and America will always honor our Apollo astronauts.”

Armstrong, the first man on the moon, died in 2012 at age 82. Collins, the command module pilot who stayed in lunar orbit while Aldrin and Armstrong hopped around the lunar surface collecting samples, did not attend the ceremony. Aldrin is 89 and Collins 88.

“Apollo 11 is the only event in the 20th century that stands a chance of being widely remembered in the 30th century,” Pence said.

The building is now home to NASA’s Orion crew capsule, the spacecraft designed to carry astronauts back to the moon by 2024 in what Bridenstine calls the Artemis program, named after the Greek goddess and twin sister of Apollo. The capsule on deck for the program’s first operational mission in 2022 was sitting beside the stage.

“The Orion is in the same cell as where Apollo was stacked 50 years ago. So we’ve come full circle,” said Glenn Chin, deputy manager at the Orion productions operations office.

Pence, chairing the White House’s National Space Council, announced in March an accelerated schedule for NASA to return astronauts to the moon by 2024, halving the U.S. space agency’s previous timeline to get there by 2028 and requesting from Congress a $1.6 billion boost to NASA’s fiscal 2020 budget request.

“The American space program is coming back. It’s coming back with a vengeance,” Bridenstine said at Saturday’s ceremony. “We all love Apollo. But in the Artemis program we go to the moon sustainably, and this time we have a very diverse, highly qualified astronaut corps that includes women.”

U.S. President Donald Trump on Friday indicated he was not interested in a mission going back to the moon, despite his administration’s plans for it. Trump instead repeated his interest in a NASA mission that would take astronauts directly to Mars, a vastly more challenging and costly endeavor.

“To get to Mars, you have to land on the moon, they say. Any way of going directly without landing on the moon? Is that a possibility?” the Republican president asked Bridenstine during an event in the White House Oval Office.

Bridenstine responded, “Well, we need to use the moon as a proving ground, because when we go to Mars, we’re going to have to be there for a long period of time, so we need to learn how to live and work on another world.” But Collins, attending the event, said he favored going directly to Mars.

The Artemis program’s objective is to conduct a series of manned and unmanned missions to the moon, using its surface as a proving ground for technologies that could lay the ground work for the longer and more complex missions to Mars as soon as 2033, Bridenstine has said.